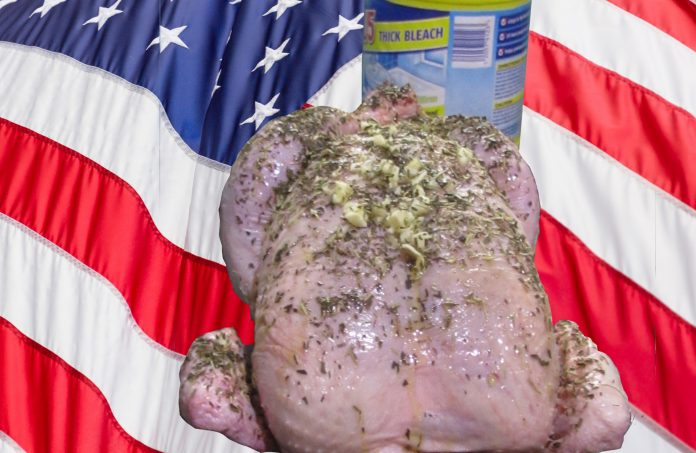 Chicken Licken had a vision that the sky was going to fall down. Inhabitants of the Southern US might well think this year’s hurricane season is akin to the sky falling down and a visitation on climate deniers given this year’s exceptional ferocity. Terrible though the destruction of property and the death toll is, the number of deaths is small compared to the number of hospitalisations and deaths caused by food poisoning in the US.

Whilst Chicken Licken agonises over the future of the world, his US brethren are mass processed at industrial speeds and could be coming our way if a desperate Fox, pun not intended, ends up doing a trade deal with Trump’s America. Fox and chickens really do not mix well.

As Brexit negotiations flounder, neither May nor Fox have found much enthusiasm for major economies to sign up to any trade deals post Brexit. Not that the UK has sufficient capacity to conduct full trade deals, according to Dr Fox. A clear admission that his globe-trotting is a waste of time and money. Still it is worth looking at what a trade deal with the US could mean.

When it comes to tough trade negotiation, the Americans are second only to EU negotiators. Trump has made some non-committal noises but he is dismembering existing trade deals rather than making new ones.

In January this year Trump pulled out of the Trans-Pacific Partnership (TPP) weakening influence with 12 Asian nations and enhancing the position of China. Obama had sought to reduce Chinese regional influence by establishing trade links with 12 other Asian nations.

This month Trump opened renegotiation talks on the North Atlantic Trade Agreement (NAFTA) as he believes it more advantageous to Canada and Mexico than to the US.

Korus is a trade deal between the US and South Korea. Trump started a renegotiation aimed at reducing the imbalance of trade. The US has a global trade deficit of $500bn. Talks were going badly and the US threatened to pull out of the treaty. Then Kim Jong-un started playing with his nuke toys and stepped up missile testing. For now, geopolitical US interests in the area have seen the walkout threat withdrawn.

Trump wants to cut UK’s trade surplus with US

Trump’s views on international trade are dominated by changing trading imbalances. He wants to see production moved to the States. Although he has made noises about a future deal with the UK, there is a problem. Trump wants to turn around the trade surplus the UK has with the US. The US and Ireland are the only significant economies the UK enjoys a trade surplus with.

Out of the EU, the UK will find itself a target for very tough negotiations should they get off the ground. Obama’s TTP deal with the EU collapsed because the US wanted powers to take EU countries to closed door ISDS courts if it believed its interests were being disadvantaged. The German Constitutional Court ruled there was no legal basis, or need for such a court.

The UK is struggling with EU negotiations because whatever the mandate it believes it has from the EU referendum to ‘bring back control” it carries no weight at the negotiating table. May hoped to strengthen her position with a bigger majority at the general election. That did not go well and forced her to bribe the DUP to provide a majority in times of need.

Europeans are both dismayed and chortling behind hands.

So what’s with the bleach?

May and Davis have a weak hand. As Yanis Varoufakis found out his mandate from the Greek people was worth nothing. Wolfgang Schäuble, the German chancellor, was dismissive – so you have a mandate, but so do we, and the mandate from the rest of the EU is bigger than yours. Little Britain becomes Greece. Not yet such dire straits, but position and trend are everything in international politics.

Trump would play May like a mouse on a string then unleash some of the world’s toughest trade negotiators on a UK team, hurriedly put in place and still not at full strength. Exhausted from EU negotiations with a difficult outcome, assuming there is one, it would be carnage and bleach drenched chicken might be the least of it.

Why could chickens be crossing the Atlantic?

Because Boris, or could it be, Jacob Rees of Yore, thought it a splendid idea. Here are the Chicken, best not to Licken, details –

US animal regulations, abattoir and meat processing requirements do not meet EU standards and it is easy to understand why when the facts are exposed. The report, How safe is our (US) food?, written at the end of last year makes grim reading on US food safety, as do statistics on food poisoning in the US.

Some choice US chicken cuts from the report:

“In view of this, the industry still has one of the highest rates of occupational injuries and illness, at rates of more than twice all manufacturing sector averages.”

“The lines are too fast. The work speed is for machines and not humans. You have to work the knife too hard. That is when pain starts.”

US meat comes with a health warning

Chicken and bleach have made the headlines but that is just the tip of the story. The US does have regulation but a lot is taken on trust. Inspectors far too often sign off on self-certification without inspection, according to some reports from the States. For those that want to increase profits like the processors; red tape, regulation and workers health and safety issues get in the way of cutting the cost of product to market.

There are two ways to combat regulation – campaign for repeal or elect administrations that cut back on capacity to ensure regulations are strictly adhered to.

Animal products are the major source of food poisoning and the chain of risk in pathogens filtering though to meat for human consumption starts in abattoirs.

Not all food poisoning incidents can be attributed as originating from abattoirs, although it is clear there are issues of faeces residues and gut contamination. Statistics from the US suggests the food processing chain in the US is an all round health disaster.

Here is a chart of food poisoning incidents at Chipotle, a US Mexican Grill chain with 2,198 restaurants. Its shares plummeted as the blue line shows. 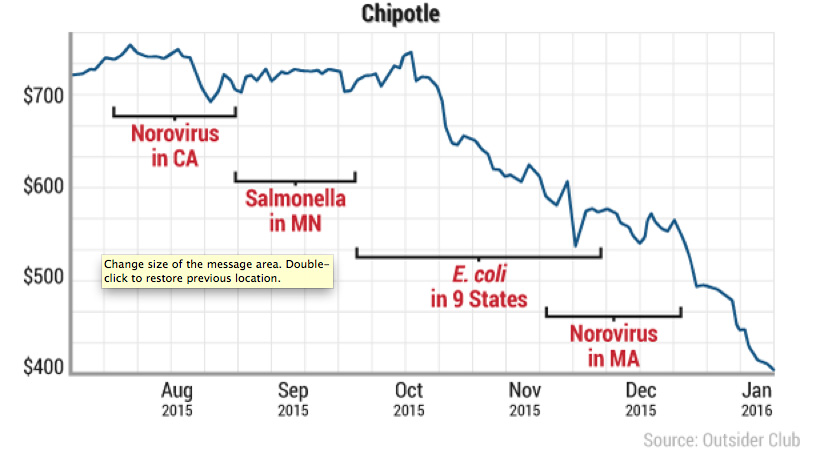 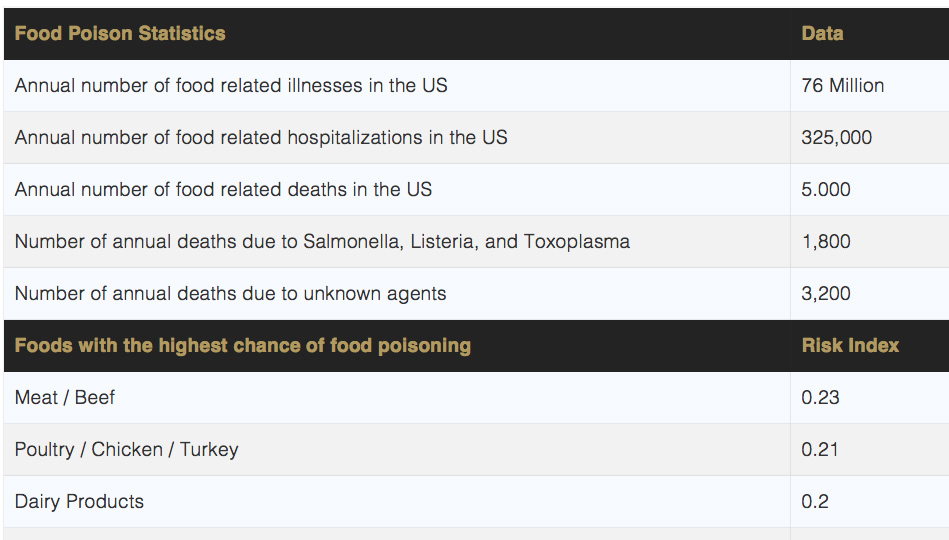 This data goes back to a study by Meads et al in 2000 and can therefore be considered to be of that time. A new study Scallan et al revised the methodology and produced this set of data.

These figures are still startling as to the scale it represents, but that is not the end of the story.

US Centers for Disease Control and Prevention (CDC) studied both data sets to see if the revised methodology indicated an improvement in food safety. They concluded that the 2 studies could not be compared and added “Had Scallan et al. elected to use the 2006–2007 FoodNet estimate of 0.73 cases per person per year of known gastroenteritis pathogens rather than use the average of 0.6 cases, their numbers would have been substantially higher and closer to the Mead et al. estimates”.

Whether it is 76 million or 48 million people a year, the numbers are staggering. In 2011 the population of the US was 312 million indicating that up to a quarter of US citizens contract a food related illness every year, based on CDC conclusions.

Should we worry in Europe?

There is no international standard for data collection so we have to work with what is available. There are around 500,000 cases of food poisoning a year in the UK population. That is less than 1% of the population.

In Scotland there are around 43,000 cases of food related illnesses annually -less that 1% of population – 5800 doctor presentations and 500 hospital admissions.

Foods Standards Scotland reported: FSS has commissioned research with the University of Aberdeen to improve our understanding of the most important causes of campylobacter (the dominant food related illness) in humans in the Scottish population. The results of this research indicate that the types of campylobacter identified in human infection in Scotland are most closely associated to those found in chicken (55-75%), followed by cattle (10%), sheep (10-22%), pigs (0-8%) and wild birds (4-8%).

The European Food Standard Authority (EFTA) has been working to produce reliable statistics from across all 28 member states. The two most common strains of food poisoning in the EU are Salmonella – 100,000 cases and Campylobacter – 200,000. Other pathogens account for much smaller numbers. The EU aggregate of food poisoning illnesses a year is also less than 1% of the population.

Clearly we have much less to worry about in the EU as data collection is used to detect the risk sources in different animal populations and put in place new safety measures. EFTA report a reduction of food poisoning cases in the EU over the last 6 years. This link will take you to a short video showing the connection to human infection through the consumption of animal produce.

Should we worry in Scotland? 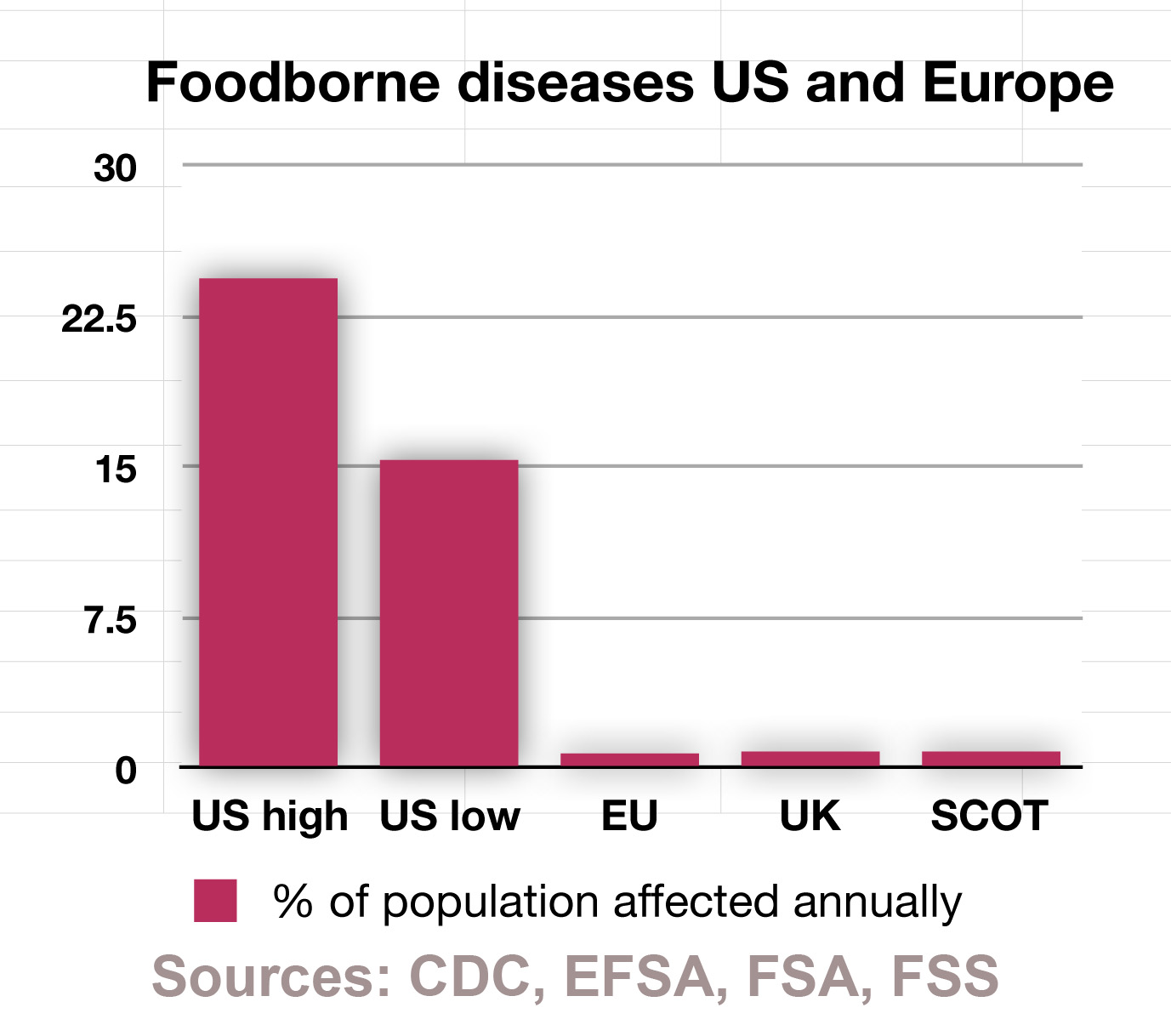 As part of a EU state – No, But the UK is leaving, intent on dragging Scotland with it and ignoring the will and determination of the people of Scotland to stay. As EU law is consolidated into UK law and EU regulation is potentially cast aside in the course of those elusive trade deals Dr. Fox is so keen on, then there is a great deal to worry about.

Cheap US chicken and other meat imports, fed from an industrial conveyor belt would decimate our own producers by introducing lower standards Scottish quality producers could not compete with. Scotland depends on high standards for sales of Scottish produce to Europe and beyond. Scottish quality meat would suffer if lower standards and less regulated US meat products were permitted to enter our market. Pay attention farmers!

The use of growth hormones and animal slaughter with inadequate time to ensure antibiotic traces in US meat are no longer in the carcass are additional concerns. Increasing resistance to antibiotics is becoming a major challenge for health professionals.

As part of the EU, Scottish data from FSS is supplied to the European Food Standard Authority based in Italy. It is important we continue to be a part of EU data collection and also part of the wider European Centre for Disease Control, based in Stockholm. Our scientists have much to contribute. Cross EU collaboration and research is the best way to ensure that Scotland’s reputation for high quality produce is maintained.

“I knew I was right all along. Last week, I watched as the Granny on my farm was buried – campylobacter. Her sky has certainly fallen down. Right now I’m watching the news on CBC from Florida – nothing to do with climate change. The sky IS falling down”.

Disclaimer: No chicken was bleached in the production of the graphic accompanying this article. It was liberally sprinkled with chopped garlic and herbs, cooked until the juices ran clear. 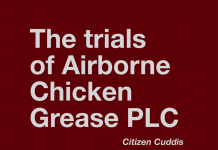 Russia, China, and the military implications of another Clinton in the...

Agincourt: £1m to celebrate defeat of French and ‘Scottish Nationalists’