Glasgow Rangers Football Club is expected to go into liquidation this week after it emerged Her Majesty’s Revenue and Customs had rejected a company voluntary arrangement (CVA) bid aimed at keeping the club alive.

The news came as a blow to the thousands of fans who had held out hope that a package put together by owner in waiting Charles Green would satisfy the club’s debtors.

However hopes were dashed when news that HMRC planned to reject the CVA offer was announced this afternoon.

The news means that Rangers PLC will effectively cease to exist and a new company, a newco, will be formed.  It also leaves doubts over Rangers’ participation in the Scottish Premier League with the eleven remaining clubs having to vote on whether to allow the new entity into the league.

Responding to the news, Mr Green said: “We will be liaising with the football authorities at the earliest opportunity to establish our position regarding the SPL,”

Before a share transfer can be completed from old company to the new entity a vote must be taken, the support of eight SPL clubs is needed to ensure the transfer goes ahead, with bizarrely Rangers having a vote.

The fate of the new club could be decided at a scheduled meeting on Monday at Hampden where the remaining 11 remaining clubs are to discuss alleged dual contracts at Rangers, however in the event that a newco has not yet been formed, the decision on SPL membership will be taken next month.

There are already doubts over whether a new Rangers could muster enough support from other clubs to enable automatic entry into the SPL.  Concerns of a backlash amongst non-Rangers fans are feared after several online surveys indicated that over 90% of football fans would be unhappy with such an arrangement, most preferring to see the new club readmitted into SFL division 3.

However, there are fears that the SPL would face significant financial shortfall if a new Rangers was absent from the SPL, TV revenues would almost certainly plummet.

Charles Green had offered debtors 9p in the pound in the hope of reaching an agreement aimed at keeping the club alive, however the refusal of HMRC to accept the deal effectively seals Rangers’ fate.

Mr Green reacted angrily; accusing HMRC of misleading his consortium after it emerged the Revenue body had claimed the decision was one of policy – meaning that the fate of Rangers was effectively already sealed some time ago.

The club, formed in 1872, will now end and the newco faces an automatic three year ban on European football.

It is also expected that sanctions imposed by the SFA after Rangers were found guilty of bringing the game into disrepute, will also pass to any new entity. 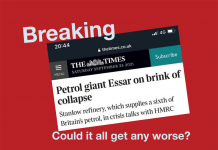