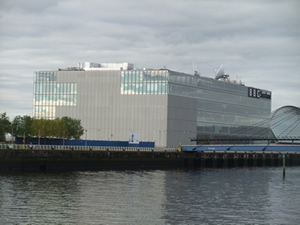 Kenneth Roy’s view (SR, 2 December) that investment in Gaelic programming detracts from more English language production in Scotland is I think misguided. What is seriously out of kilter is the spend on English language programming in Scotland. This seems to be about half the UK average.
When director-general, Mark Thompson, opened the new BBC studios at Pacific Quay in 2007, he said: ‘Network deliveries from BBC Scotland not only can but must grow to at least its proportion of the UK population – though I regard that as a floor rather than any kind of ceiling’. At that stage just over 3% of the BBC’s annual budget was spent on programme making in Scotland. Worthy words!
Twenty years ago as chairman of the Scottish Independent Programme Producers, I was presenting the same argument. The latest figures indicate a budget increase of £3 million in the budget. So, taking inflation into account, Scottish output has remained static and has failed to move toward the DG’s ‘floor’ of 9%. We are being short-changed by at least 60% and with Scotland’s ability to punch above its weight, probably twice that.
The argument has been made and accepted but the structural constipation of the BBC prohibits change because it threatens to diminish the power base of the London decision-makers. Furthermore, ‘Made in Scotland’ is not the same as ‘Made by Scotland’. Network production in Scotland depends heavily on the importation of key talent from the south. A large chunk of production budgets is spent on hotels and travel.
Even current affairs stories which make the national news see crews being flown up from London to duplicate ‘Reporting Scotland’ coverage of the same. To a large degree, it is a perspective of ignorance and arrogance. In the eyes of the metropolitan masters, little of quality can be created north of Hadrian’s Wall. Even if a drama series is commissioned from a London independent production company but with a remit to shoot in Scotland, the masters are twitchy.

When Gaelic TV started there was hardly any experienced Gaelic TV talent but the potential has developed into a healthy reality whereas English-speaking talent in Scotland, when it reaches a certain level, has to emigrate in order to survive and develop.

One would expect a level of BBC confidence in a well-established London producer but senior in-house BBC executives tend to exhibit an obsessive hands-on control with demands for last-minute rewrites and reshoots. This is metropolitan neurosis and, if one asks why, the reason is perhaps that these very powerful people live on a knife-edge. Some have tried the hard world of independent production and failed. So life outside the corporation is not an option. Many of them cannot afford to take risks or make mistakes, because there is nowhere else for them to go. It is the dead hand of self-preservation – relying on producing proven formulas of more of the same.
The importation of safe ‘known’ key personnel from London prohibits the development of an indigenous Scottish talent base. If four of the eight people in charge of BBC Scotland are Gaels, might it not be that it is because they have had the freedom to develop (even on a mere £25,000 an hour) some quality programming? Kenneth Roy mentioned ‘Machair’. There is also ‘Eorpa’ – a long-running current affairs strand with an international perspective unmatched in the English schedules. It is also on satellite. I view it from time to time from a remote village in the Pyrenees – as just one of an undefined international audience which is not reflected in the viewing figures.
The value of Gaelic is that London has no interest in it. It is beyond the pale and so has been much freer to plough its own furrow. Its success has been to reach a far wider audience than the Gaelic core. For every Gaelic speaker, BBC Alba is watched by three non-Gaelic speakers. When Gaelic TV started there was hardly any experienced Gaelic TV talent but the potential has developed into a healthy reality whereas English-speaking talent in Scotland, when it reaches a certain level, has to emigrate in order to survive and develop.
Gaelic, so long repressed by English language dominance, is an important part of Scottish culture. It does not take money away from English language production It adds to it. In the late eighties, when the Scottish Independent Programme Producers first suggested a Gaelic TV service through a parliamentary debate presented by Denis Canavan, the argument was based on the fact that a sizeable chunk of Scottish licence payer’s money automatically went towards Welsh language programmes. A few months later, the government quickly earmarked a sum for Gaelic broadcasting equivalent to that of Wales and the principle remains. It is largely additional to, not part of, BBC Scotland funding with £10m coming directly from the government. In TV terms the BBC contribution of £7m is equivalent to the production cost of two episodes of ‘Downton Abbey’. (In Wales the BBC spend on Welsh programming is £23.5m and S4C which also received a government grant has a budget of over £90m.)
The perceived interests in London of the English audience dominate English language network programmes. In 1998 I developed a six-part drama series based on the Clearances, and set half in Scotland and half in Canada. The project was developed at a cost of £70,000 and was ready to go into production with over £1m of investment from Canadian Broadcasting. At this point the head of department retired. The replacement came from sport (a curious move you might think) but within the civil service structure, an intermediate six-month stint as head of department somewhere was necessary to fast track a promotion to channel controller. The series was dropped, the development funding written off and the overseas investment lost because the new incumbent felt that ‘English audiences would not be interested in the Clearances’…and this was at the height of Bosnian ethnic cleansing.
I was a leading Scottish independent producer for 40 years. I worked with most of the major networks in Europe and North America on major drama and documentary productions. I was based in Scotland but I was never able to make a programme in Scotland and I was not alone.
What Scotland needs is not less Gaelic but funding for English/Scots language programming on a level parallel to that of the UK as a whole. The BBC will not change. It is structured so that it cannot. Britain needs a different, devolved broadcasting system – a network guaranteeing a minimum (but not fixed) quota of Scottish production. Suitability for English audiences would remain a London prerogative but opting-out would become a two-way rather than a one-way choice. An autonomous Scottish broadcaster would also have the possibility to collaborate competitively with non-British networks. Why not Scots/Canadian, Scots/Irish, Scots/European collaborations – which are there for the making and could replace to some extent the present deluge of English originated programming. (In the early days of Channel 4, Scotland represented the highest level of international co-production in the UK).

The BBC is centralised, inflexible, and hierarchic with a civil service modus operandi. Structurally it is a dinosaur incapable of metamorphosis. There is a lot of first-class Scottish talent which at present finds it impossible to remain Scottish-based when the key talent always comes from London.

In BBC terms, Scotland has always been a colonial outpost. Why should we have no option but to receive 97% of our programmes originated by our London masters? BBC was born in an imperial era and restricted by a system of terrestrial transmission. Today those criteria no longer apply. Television is international. Transmission is not landlocked. The decentralisation of Scottish broadcasting is overdue. Gaelic programming is not a problem. It is a bonus. Being tied to the apron strings of a London hierarchy determined to hang on to the power and which funds English language programming in Scotland at half the UK level and 3% of the UK output is unacceptable.
When I helped negotiate the terms of trade when BBC was forced to accept a quote of independent production, I insisted that Scottish contracts were made under Scottish law. ‘But we deal with the whole world under English law’ was the astonished response of Television Centre. I pointed out that Scotland was not part of ‘the rest of the world’ and as the British Broadcasting Corporation they were bound in the UK to observe Scots law in Scotland. There was no gainsaying but it took three years to get it accepted. It was a reflection of attitudes and in TV Centre attitudes do not change. I wonder how many Scottish programmes are actually contracted under Scottish law today? I bet in the last 20 years the principle has gradually been swept under the carpet.
The BBC is centralised, inflexible, and hierarchic with a civil service modus operandi. Structurally it is a dinosaur incapable of metamorphosis. There is a lot of first-class Scottish talent which at present finds it impossible to remain Scottish-based when the key talent always comes from London. Economise on the airfares and hotel bills of shipping people up and down to create an illusion of production in Scotland. Create the structure for a real contribution to English language and indeed international broadcasting by Scotland. It is time for the Scottish government to make a stand.

Robin Crichton is an independent producer

This article has been reproduced courtesy of Scottish Review