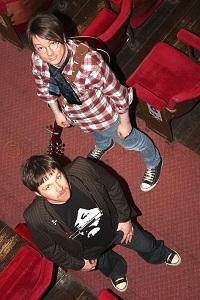 A long time mover and shaker on the Inverclyde music scene Mark Anderson (aka marky:boyofdestiny) has just about had a go at most musical pursuits over the years.

Joining his first band in college using a battered old Les Paul copy Marky discovered the joy of singing and playing guitar.  Over the next few years he drifted in and out of various bands (Long Good Fridays, Baked Potatoes) before forming Brother John with three long time friends (including Gram Allan).

Brother  John gigged extensively about Greenock, Gourock and Glasgow playing venues as varied as King Tuts and Nice ‘n’ Sleazy as well as releasing a self produced EP.  At the same time Marky was also helping promote bands and run nights in local pubs such as Loco, State of the Union, Red and finally, the now legendary, Overdrive.

After Brother John parted ways Marky spent a few years in the wilderness writing songs but doing not a lot else. He was then asked by his buddies at LI Media to get involved in a CD of Burns songs and then a CD of songs of local poems and stories from times gone by. This CD was called Downriver and was a big local project run by The Magic Torch.

This fired his enthusiasm and so started the recording of what was to become ‘When I Was Hope’. This reunited Marky with his long time collaborator Gram Allan (The Struts, Brother John, No1SoN).

‘’The way it works is I bring the song and Gram (or as he is known on my blogs The Space Pilot) twiddles the knobs, slides the sliders, adds his deft touches and out comes a wee gem’’ 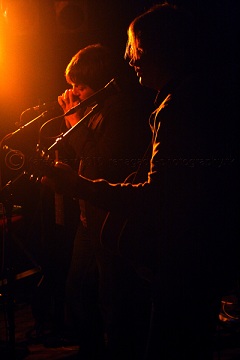 And so it went every Toonsday night until almost 3 years had passed.  Realising they had an albums worth of material they put together ‘When I Was Hope’  and launched it at The Beatclub@ The Café Continental in Gourock.

Snapped up by local musical impresario and label boss McD to his Beatclub Recordings stable of artists marky:boyofdestiny has now released his debut single ‘Why Is It When I Dream..?’

With influences ranging from Nick Drake to Neil Young, Brian Wilson to Teenage Fanclub this is catchy, infectious music at its most positive and optimistic.

‘’I thought I was having a Roddy Frame moment during Why is it When I Dream. There’s no doubt about it they do what they do well!!’’

While Rick Fulton of the Daily Record said:

‘’This boys destiny is on the up’’

If you’ve heard Marky’s samples and like the sound, the singles can be found on the following websites:

Marky‘s own myspace page for his music can also be found here.