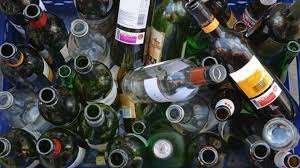 Glasgow poet and writer Cee Smith considers the challenges we face too often from the neck of a bottle.

It’s an understatement to say Scotland has a drinking problem.

Raining? Drink in a pub.

Sunny? Drink in the park.

Happy? Celebrate with a drink.

Sad? Commiserate with a drink.

It’s our primary meeting place. Our social interaction. Gathered around another round.

And we’re not unique in this. But a combination of weather, a lack of late night dry venues and an overall collective depression leads a great number of us to throw it all away for another pint.

I drank less when I worked in a club on Sauchiehall Street. Mostly because there was no time.

When you finish at 4am, get home by 5am, up at 7am start class at 9am, finish classes at 5pm and start work again at 6pm being drunk wasn’t really an option.

I generally didn’t go home to save the money. Topping myself up with enough stimulants and depressants to earn a spot on somebody’s couch and get some rest closer to my next destination was what drove me forward each day.

When I changed jobs, got a flat, graduated, lost the flat then lived in an ex-boyfriend’s cupboard for a while, a stretch of free time emerged before me and as those closest to me were already heavy drinkers, it was a natural progression.  I still wanted to find a better couch to sleep on.

By the time I had been sexually assaulted for the third time due less to alcohol consumption and more from exhaustion, I dove further into the fog of spirits. I could get angry when I was drunk. I could feel despair. I could express love.

But the hangovers were spilling into my drunkenness.

I just wanted to talk through some grief and pain.

There are few people we meet in life that we trust enough to be sober around and still feel that level of connectivity we desperately try to find.

The reluctance to be left alone, in silence, makes a great number of our decisions for us.

I get myself sober on a fairly regular cycle, whenever I’ve lingered down the hole too long. When it goes from craving to absolute need. Last year I was sober, bar the odd glass of wine with dinner, for around three months.

I’m just over two weeks so far this year.

I’ve slipped up. Borrowed sips and half finishing cans.

The tension builds in my cheekbones after three hours in a pub. After four hours of listening to your friends starting to slur and sparkle the tension starts craving continuous consumption. The nicotine headache from chain smoking is a dangerous one too.

It’s best relieved with a dram.

It’s been noticeable which friends want to support the decision and which start the ah go on, have a drink routine.

‘You cannae trust a tee-totaller. There’s always a reason they don’t drink.’

And that reason is no different to why everyone else is drinking. Because of a greater need. A deeper problem.

I walked down Sauchiehall Street at lunchtime yesterday. Busy with tourists and families. The men shuffling from bookies to spoons, women dragging young children from shop to shop. The conversations were mundane. The weather. The day.

I walked down Sauchiehall Street at 3am this morning. Busy with drunks, emergency services and night-shifters. In 10 minutes I had passed through six men taking a piss, two  bloody noses, 15 girls crying, one man lying unconscious as the paramedics tended him and five policemen listening patiently to why the bloody noses had happened.

And I’ve been on every side of that. It’s not romantic or judgemental. I’m just tired of it. Too easy to switch it off, not to feel pity or anxiety. I dodged a kebab thrown at me when I didn’t respond to a catcall without breaking my step.

All of this continual destruction, a desire to be held and listened to.

We are frightened. We are sad. We are angry.

We do not have control over our lives trapped in cycles of consumption, warmongering and scare tactics.

I stepped off the train in London Euston a few days ago to the news there had been a terror attack at Westminster. But the Londoners I met made a point of not letting it bother them. London keeps calm and carries on.

But they did drink a lot that night.

I’m not cutting alcohol out of my life entirely. It’s ability to act as a release isn’t all bad.

But abusing alcohol as the only means of release is driving us hysterical.

I try again tonight at McChuills for the Yellow Movement Sundays, this week featuring Abi Normal, Dougie Smith of the Mickey 9s and the Well Happy Band. If the mood strikes me I might have one drink.

But at some point I’ll be dancing up the front, sober or otherwise.

Twistettes launch album career with a love letter to punk