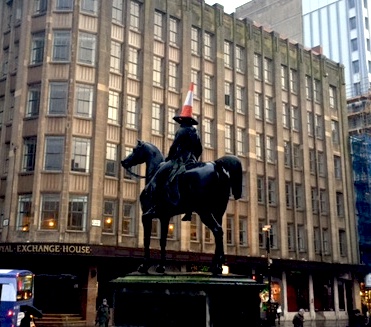 In Charlottesville or Charlotte Square: history is a nightmare that has to be confronted, says Christopher Silver.

Recent events in the United States have provoked an extensive debate about monuments to controversial historic figures, and whether they ought to remain standing in public places.

In Scotland, this debate has overlapped with a great deal of comment about the First Minister’s reflections on the name of her party. In a debate at the Edinburgh Book Fesitval, Nicola Sturgeon said that if she could “turn the clock back 90 years” the name would be changed.

This would save the party she leads from being tagged as “nationalist,” a term all too readily associated with some of the worst crimes of the past century, and which Sturgeon described as “hugely problematic.”

It was also a quiet reference to the fact that, though eclectic, the early character of Scottish nationalism, like wider Scottish society and identity, included a clear strain of anti-Irish bigotry.

But such interrogation of the past, though it often provokes indignation from certain quarters, should always be welcomed.

The urge to be able to step out of history, rather than simply plod along the course it has set us, is one of the strangest human impulses, but it is also one of the most fundamental.

You cannot look at the fabric of any of Scotland’s cities, with their proliferation of statues of glowering old men, and not see some desire for immortality. Why else would these memorials demand a deliberately superhuman likeness?

Such efforts were undertaken long after the notion of immortalising the wise, wealthy and industrious stopped seeming blasphemous. But the practice was borne of the same urge: these people that you gaze up at are not quite of the same order of creation.

The building of monuments imposes a kind of perpetuity, as though old heroisms and objects of national or civic worship must never be disturbed. But the desire to tear something down does not mean erasing its memory: it is simply about accepting that, if our consciousness today is a product of history, we at least have a right not to be trapped by it.

Any political project is about starting an argument with the past and in doing so, trying to leave a stamp on the future. For some of us, our politics can lead to a desire to wish that history had not been – with its brutality, its cruelty and its immeasurable suffering. We banish old words, we frown at old customs and wonder how such barbarism was ever tolerated. We tell ourselves a story and constantly edit it.

The key question is not whether to have a shared story or not – that’s an inevitable part of collective human experience – it is to decide who gets to play the role of editor.

Fundamentally, this is what all nationalism, or politically expressed nationality, is about. Those who deny a national story, in seeking to pretend that elite versions of history are universal, are usually militants for their own sense of historic experience.

We need to have the confidence to open this process up and to expand the diversity of experiences that make up our history. Scotland is in a good position to do this, even if its potential to be anything other than tribal and provincial is frequently denied by a large number of Scots.

Something of this tendency can be seen in those who, for political gain, draw a pseudo-intellectual distinction between “patriotism” and “nationalism”.

The idea that love of a country – and love must surely be emotive and uncritical – is any better than a political project explicitly hitched to a certain nationality, is absurd.

It’s not surprising that patriotism is the preferred term used in America, where nationalism is probably more pervasive than any other western society. The sight of rows of children pledging allegiance to a flag every morning is a far darker and more pervasive instance of nationalism than any at work in Europe today.

But triumphant nationalisms don’t require the capacity for self-criticism: for both British and American nationalists, history has validated their institutions and no revolution has ever had to remake them. From Magna Carta, to the Founding Fathers, there is just a long line of patriots – ending (conveniently) with the present order.

This is why the urge for iconoclasm is far more threatening and potent for history’s victors. A tearing down of aspects of history that have gone before suggests that the present, as a logical conclusion to a narrative of resilience and victory, might not be as inclusive or successful as the national story assumes.

Nationalism in Scotland is an anomaly because history has not provided it with the raw materials most nationalisms need. A grand tale of oppression or occupation by a foreign power is absent. It therefore occupies an unusual space – neither comfortable as a footnote in the imperial story, nor able to claim the compelling narrative of emancipation. To some degree this deeply ambivalent view of national history is shared by the former white-settler dominions of the British Empire, but in Europe, it is unique.

This sentiment accounts for the doubt that Nicola Sturgeon expressed in her party’s name. Scotland was not historically colonised and its national institutions were never shut down by force. Instead they either endured the Union settlement, or went off quietly into the night, with a golden handshake of historic proportions.

With such an inglorious end, that old, impossibly distant Scottish national state is not one that can be idolised. It was dissolved decades before the notion of nationalism as a popular political project first took root in the revolutions of the 18th century. It was far too early to link up with the development of a cultural franchise of romantic nationalisms in the 19th.

Birth of a nation

Unlike so many nationalisms, the accepted story of Scotland is not a heritage that demands to be embraced, how could it be? If nationalism, rightly, enjoins the question – whose nation? Patriotism, the demand of love, simply causes the incredulous national to ask, why?

There is much to be detested about Scotland, many features that it would be perverse to love. The way its history has been appropriated is no exception. You rig up one monument, to, say Wallace, and tell his story (with some reasonable basis) about an inspired popular liberator, a good patriot, only to find it twisted beyond recognition.

Consider that, as the tower itself was being completed, men of Scottish descent were fired by such heritage in campaigns of terror to defend white supremacy in the Confederacy’s defeat in the Civil War.

Scottish symbolism and Sir Walter Scott were binged upon in order to embellish this oppression. The Scottish national story as it was told then left its mark in the birth of another nation: boosting the chivalric myth of the gallant south and providing a thin ethno-cultural veneer for the politics of an embittered, dispossessed, slave owning class.

More recent southern nationalist organisations like the League of the South, tie their neo-Confederate agenda to the notion that the southern states were built by a primarily “Celtic” race (as opposed to the more anglicised and cosmopolitan north). This, they contend, accounts for the militaristic prowess of the Confederacy against the far larger and better resourced Union forces.

The Southern Poverty Law Centre, which monitors hate groups in the south, has noted an “obsession with Scotland among the Klan and hardcore militia-groups”.

The making of myths is always dangerous and the deep traumas still ingrained in the contemporary south show us the profound risk of refusing to examine past controversies.

Looking at all the statues of the grand old men of industrial Scotland, we could tear them down, or we could insist on more visibility for those people that stood behind them and guaranteed their wealth: women, people of colour, the destitute.

Incorporating the history of the obscured and forgotten into the ongoing national story of Scotland is bound up with the challenge of mapping out a future nation state.

Rather than seeking to dream a pleasant story about the past that flows neatly into nationhood restored, we ought to remind ourselves that history is a nightmare, and that the struggle of any worthwhile political project is to emerge from it awake and more self-aware.

Perhaps the Scottish nightmare is a kind of paralysis, filled with all that generations of the Scottish establishment sought to obscure: the cronyism, the bigotry and cant, the wasted potential, and the yoke of ‘aye-been’.

But in order to awake from such a troubled sleep, you have to first be prepared to question the words and images that make up your own history and try casting them in a different light.

A political form of nationality that questions its own origins is the only one that stands a chance of relevance in the current century.

Scottish nationhood will only ever come to pass if we continue this long tradition of taking a critical approach to our own history – myths and monuments won’t sustain it.