An MP has expressed concerns after a report by Sheffield Hallam University warned that welfare reforms being proposed by the UK coalition could impoverish huge numbers of people.

Part of the changes would see the withdrawal of incapacity benefit from 115,000 people by 2014.

SNP MP Dr Eilidh Whiteford criticised the plans and said that any entitlement must be based on medical need.  The University warned that “countless” households were facing “untold distress” if the entitlement to incapacity benefits is cut.

Dr Whiteford, who is the SNP Work and Pensions spokesperson said:

“Withdrawal of incapacity benefit must be based on individual medical need not some arbitrary target set by Ministers in Whitehall.

“It is difficult to believe that 115,000 people could all have been wrongly assessed in their current entitlement, particularly when there are already serious questions over the reassessment process with people undergoing chemotherapy, in some cases terminally ill people, being ordered to attend back-to-work interviews.

“Return-to-work initiatives can benefit both the economy and the individual, but people should only return to the workplace when they are genuinely able and when correct support measures are available.

“The SNP back a move to a benefit regime that uses resources efficiently but provides support where it is needed.  Genuinely sick or disabled individuals must not become an easy target for Conservative and Liberal cuts.”

The study found that the Tory/Lib Dem reforms would see six hundred thousand people taken off the benefits system and many would have to rely on family and friends in order to survive.

Researchers from Sheffield Hallam University said Scotland, Wales and the north of England would suffer most from the changes to be introduced by 2014. 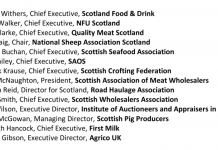 Reform of police and fire services