Early Thursday morning
According to Gerald Warner of Craigenmaddie, the author of Scotland on Sunday’s ‘Strictly Speaking’ column, I am part of an extreme left-wing conspiracy whose present objective is to achieve the ‘Dianafication’ of Jimmy Reid. He does not name any of us, but the identities of the guilty parties are only too obvious from our newspaper utterances, our television and radio appearances, our online witterings. 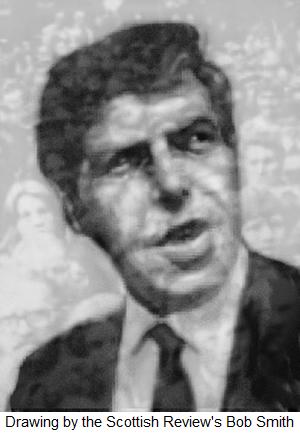 Early Thursday morning
According to Gerald Warner of Craigenmaddie, the author of Scotland on Sunday’s ‘Strictly Speaking’ column, I am part of an extreme left-wing conspiracy whose present objective is to achieve the ‘Dianafication’ of Jimmy Reid. He does not name any of us, but the identities of the guilty parties are only too obvious from our newspaper utterances, our television and radio appearances, our online witterings.
For the last week (it seems), we have been outbidding each other in a Jimmy Reid ‘tributefest’, which will culminate later today with the funeral. Since I am to play an active part in these proceedings, presumably I am now high on the list of Gerald Warner’s Commie undesirables. Alas, I have sad news for our resident artist Bob Smith on his return from a suspiciously extended break in a republic called France. His drawing on this page makes him part of the conspiracy too. Poor Bob. Another reputation in ruins.
Anyway, Gerald Warner of Craigenmaddie – for it is he. Checking his entry in an old copy of ‘Who’s Who in Scotland’, I made a thrilling if slightly scary discovery. We were born – yes, tis true – we were born within four days of each other in the same town! This may be the first time I have ever used an exclamation mark, what Lord Beaverbrook called a thunderstriker, in print; I have just broken one of my cardinal rules. But isn’t it exciting? Gerald Warner of Craigenmaddie is a fellow Bairn! There, I’ve done it again! It’s infectious! (It is true that, in more recent editions of ‘Who’s Who in Scotland’, the reference to his town of birth has been mysteriously omitted – but I propose to let that pass in discreet parenthesis. Falkirk is not the town it was. Even I, a former Falkirk Man of the Year, must acknowledge that.)
An all too plausible scenario emerges. Is it conceivable that Gerald and I were born in the same Falkirk nursing home, he four days earlier? Dare we contemplate the possibility that our respective mothers shared a room and that Gerald and I occupied adjoining cots?
OMG. I must stop using this acronym, but really. OMG.

Gerald Warner of Craigenmaddie must have been my first contact with the human race.

Afterwards, our paths diverged sharply. Gerald went on to St Aloysius College, a superior Roman Catholic school in Glasgow, and to Glasgow University, while I, lacking formal education, started work for a newspaper at the age of 13, the last of the child labourers. Gerald became active in Conservative politics and was chairman of the Scottish branch of the Monday Club, a Tory fringe group so far to the right that it was in danger of falling into the sea at North Berwick. I, on the other hand, was notoriously inactive. I played a little golf, but never joined a political party or group, never went on a demo (oh, not strictly true: I once marched in Inverkeithing against the increased domestic rate), never joined Gerald in the Scottish Monarchist League, the International Latin Mass Federation, or anything like that. Instead I busied myself covering the dogs three times a week.
I fear that since Gerald left the cradle next to mine he has done rather better for himself, enjoying a more distinguished and more lucrative career. One thing we do have in common is a liking for pseudonyms. Gerald was better known for a while as Henry Cockburn of the Sunday Times, while I disguised myself as Muir Maxwell, a stuffy, tweed-suited reactionary of Scottish Theatre magazine, who preferred Rattigan to Pinter, William Douglas Home to Tom Stoppard, and was violently opposed to nudity and excessive swearing on the stage. The difference is that Henry Cockburn often received a cheque at the end of the month, while Muir Maxwell remained a penniless hack to the end.
All this – my dull personal history as an unsuccessful amateur golfer and failed greyhound racing tipster, my non-existent political credentials – may come as a disappointment to Gerald, whose lusty cries once kept me awake for nights on end. From birth I was known as Gloomy Joe, a silent and melancholy child, and now I know why. Gerald Warner of Craigenmaddie must have been my first contact with the human race.
Gerald is owed an explanation. Since I cannot claim ever to have been a member of the Communist Party or any other party, and since I try to avoid parties even of a social nature, he will be wondering why I am such a prominent contributor to the Jimmy Reid ‘tributefest’. There is a reason, but it has nothing to do with politics. It is something that my fellow babe-in-arms may not have picked up during his otherwise fruitful years at St Aloysius. It may be loosely connected to the essential nature of humanity.
I will spell it out. It is not necessary to share or espouse another man’s political views in order to admire him deeply. It is not necessary to approve of everything he has ever done and said in his life. Jimmy Reid simply made me feel good about living in this country. His love of learning, his passionate curiosity, his restless intellect, his oratorical brilliance, his panache and style, his instinctive feeling for his fellow man, his generosity of spirit and good companionship transcended politics and causes and occasional wrong-headedness and all that stuff. He was one of the great life-enhancers of our time. He represented something good about Scotland. I am not sure what it is – I may be clearer in my view after today – but I know it’s there.
Will that do? It must. I have a funeral to attend.

Disclosed: a public body’s battle of strategy against

The lawyers we pay to impose colossal rent increases on the...