In an age when borders are supposed to be fading, most people remain stubbornly fond of the ideal of the nation. It offers comfort: a framework, a set of shared tools. The promise of globalisation: to transform all of this old-fashioned rootedness into a series of free networks and connections, is having a troubled journey, to put it mildly, towards fulfilment.

To understand the Catalan situation and the energy gathered behind other ‘new’ nationalisms, it’s first necessary to pause and consider this wider irony.

As a whole set of different nations were hoisting freshly embroidered flags near the end of the last century, the march of globalisation seemed to suggest that all of these new borders and passports and bureaucracies would, sooner or later, face a gentle, peaceful, obliteration as markets and transnational networks took hold.

2008 gave the lie to this apparently extraterritorial new order — after financial institutions across the west found themselves reliant once again on the nation-state (historically the nation-state was a necessary step in the creation of modern finance). The “too big to fail” banks, far from outgrowing their origins, suddenly found themselves in need of taxpayers, citizens, territories and public money and had to make their own territorial claim to sovereignty.

It was against this backdrop that the politics of national identity returned with a vengeance in the heart of the world’s most advanced economies. This was a by-product of the great dislocation between nationals and their central governments.

Once the places where welfare states were built, economic plans pushed forward and institutional pride instilled, the old centres in western countries have become hollowed out: their moral claim to embody the wider people exposed as a sham.

Far from protecting citizens from the rough winds of late-capitalism, they have become instruments for inflicting collective punishment, through austerity, for the catastrophic failure of now nationalised financial institutions. After greasing the mechanisms of the financial heights of the economy with the common wealth, their legitimacy is contested everywhere.

The predominant experience of global capitalism in the first decades of the twenty-first century, as Joseph Stiglitz memorably put it, has been the privatisation of gain and the socialisation of loss. But it has also been defined by the globalisation of profit and the localisation of loss.

Barcelona, both national capital and international hub, is a city built in the image of the global winners: the young, the wealthy, the transient. Like all of the world’s great global cities, the local rubs up awkwardly against the elites, while the authenticity of the local is subordinated to drawing money in. But in an age of austerity this creates a dilemma, framed by the question – who is the city, and the nation, for?

In re-asserting a claim to public life, by challenging the legitimacy of the old, powerful, but cumbersome states in Europe, insurgent nationalisms are able to draw on this general sense of disconnect.

By offering up the founding a new state, a new republic, a new kind of connection with political life seems possible. Their offer of the opportunity to start again, though lacking any guarantees or neat ideological solutions, seems to provide a basis for reclaiming a national public space for the people.

What these non-ethnic nationalisms also have in common, is the way in which old, and historical suppressed languages, cultures, institutions and customs provide a glue to suggest that a distinct outcome is possible.

The new republic has its own memories, traditions, inheritance, and baggage, hidden from view by historic incorporation with a larger neighbour. But it offers the confidence to be different.

While these national movements waited in the wings as a new Europe was being built in the 1990s, eyeing up the prospect of a place within a “Europe of regions,” it took 2008 to catapult them to the fore.

While the actions of the Spanish state over the past month do seem to herald a new age of extremes in Europe, the approach of Catalan politicians is, in a sense, even more remarkable.

Catalan political history has tended to define itself in opposition to the imperialistic authoritarianism that has so often emanated from Madrid. Its prized claim to distinct rights and freedoms, stretching back to the Middle Ages, are said to offer an emphasis on consensus, civil society, compromise.

Many Catalans yearn to express cultural affinity with the core countries of Northern Europe, seeing their country as a hybrid, or a cultural bridge between the Mediterranean and the north.

For years after the death of the dictator, Catalan nationalism did not mean support for independence. There was a project instead to Catalanise Spain, to push, in the context of a federal structure, for reform and greater autonomy.

Such gradualism belongs to a pre-crash age that was naive and oblivious to the violence of austerity. Today, many commentators marvel at the discipline, determination and unity of the Catalan movement. Few ask why one of the world’s most cautious national movements crossed its own Rubicon, just as the conservative Spanish state pushed headlong in the opposite direction.

Rajoy, understanding the lingering sore legacy of what unity means in Spain, has thrown salt in the wound for political expediency. The last time the policy of suspending autonomy in Spain was pursued, it was imposed by Madrid on Catalonia and the Basque Country with the horrors of aerial bombardment and fascist repression. 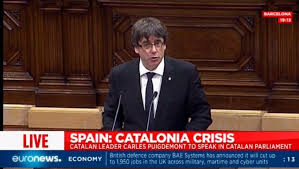 Still, despite being backed into a corner by force, there remains a steadfast refusal to contemplate its use on the Catalan side.

This one-sidedness has been met with a hollow response, from every voice that might matter. This is a bitter rejoinder – with consequences that stretch far beyond the Pyrenees. Europe, built by the elites of the continent, is deaf to the local complaint.

The EU is now engaged in an absurd dance to distract from its lack of credibility on the crisis. Rather than facilitating dialogue, it prefers instead to slight the the Europhile Catalans by placing them in the same bracket as the isolationist Brexiteers.

The extreme politics of the centre can never be at fault here. In fact, like all systems reliant on markets today, the EU finds it far easier to imagine total collapse than adapting to moderate reform.

Established power cannot contemplate the force it deploys and the structures it protects being dismantled by popular demand. The rules of the club are simple and, as has been restated by Donald Tusk and others “for the EU nothing changes.” Might is right.

Having proclaimed a Republic once before, the Catalans know that such struggles against the force of the Spanish state are dangerous, existential. Many feel the opportunity of a new republic is worth it anyway.

Lluís Companys, who proclaimed the last one, ended up in front of a firing squad. In Europe the use of force to settle political disputes was supposed to be a thing of the past, that assumption was always threadbare, it is now being openly questioned.

In one of the most economically developed corners of the continent, in the context one of the least confrontational, most freely “post-national” political cultures of any European people, popular frustration and an intransigent state has seen the basic tenets of democracy tested to breaking point.

But this moment, when the old centres are dying and the new republics are trying to be born, is a time of monsters in riot gear. The only option, in times like these, is to try and build something new. At least the Catalans, who know their own history, recognise this struggle for what it is, and that change is coming either way.

Costing success: The dilemma of devolution and nationalism for the SNP