Scotland will be home to the next generation of submarine based nuclear weapons, following a Commons vote approving the £31n replacement of the current Trident system.

The vote, where the Government benches were joined by numerous Labour MPs to push through the replacement of four Trident vessels with four next generation submarines by 472 to 117 votes tonight (Monday). The new system will be built by the US defence contractor Lockheed and based on the new American system. 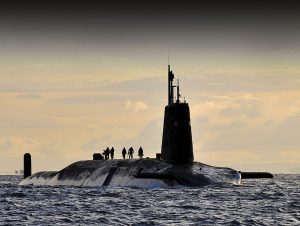 A clear majority of Scottish MSPs oppose Trident’s renewal, but the situation is different elsewhere, with many Labour MPs in England and Wales supporting the supposed “independent nuclear deterrent” which critics say is a Cold War response to a geo-political situation that is much changed since the collapse of the Soviet bloc more than 25 years ago.

Thousands of people marched and held protests against Trident at several Scottish locations at the weekend, but the Monday night vote was expected. The question on the lips of many critics is why outgoing Prime Minister David Cameron chose now as the time for the vote. It is believed widely that his priority was to distract attention from recent Tory splits on EU membership, as well as the opportunity to embarrass Labour while it undergoes a leadership crisis of its own regarding the leadership of Jeremy Corbyn.

Mr Cameron’s unelected successor, Theresa May, spoke out for Trident before the five hour debate began. The debate saw opposition to the new system led by the SNP, with some Labour MPs, Plaid Cymru, the SDLP and English Greens leader Caroline Lucas who warned that nuclear weapons make us less safe, and not more.

The total cost of Trident’s replacement including manufacturing, maintenance and support, has been estimated at up to £205bn.

The SNP attack on Trident was led by its parliamentary leader Angus Robertson, who had urged Labour to set aside its current leadership battle and oppose the Trident replacement programme.

“It is wrong in principle to build yet more nuclear weapons when we should be showing moral and political leadership in ridding the world of weapons that we do not want or need, and could never use.

“It is also an indefensible waste of resources at a time when we are being told by this UK government that we do not have enough money to properly fund and protect our conventional forces, our public services, or support for ordinary families and the most vulnerable.

“The SNP called for this vote to be delayed so that proper scrutiny could take place,” he concluded.

In contrast, some Labour MPs used their time in debate to attack their own leadership for opposition the nuclear option.

Defence Secretary Michael Fallon claimed to MPs that Trident replacement had been judged to represent best value for money. The new system is estimated to have a 50 year lifespan but will not be in place for more than a decade.

“The point about deterrents is that it places doubts in the minds of our adversaries” he said. Fallon claims there are specific threats from North Korea, which is attempting to develop long-range nuclear weapons, and also Russia.

His Tory colleague David Mundell was the only Scottish MP of 59 to vote in favour of Trident’s replacement, which will be based on the Clyde – 472.3 miles from Mr Fallon’s constituency of Sevenoaks in Kent.

Sturgeon: Vote for an independent Scotland, and a better UK