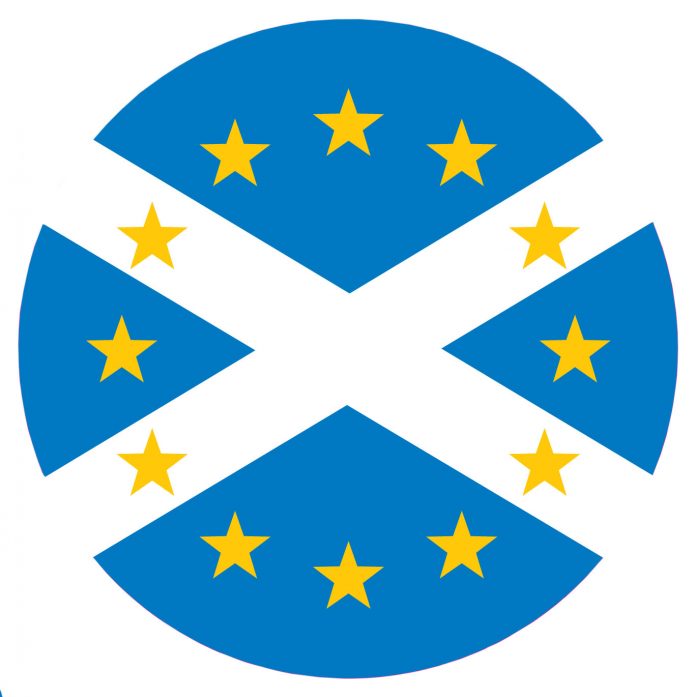 Finally after much pushing, the UK government published a White Paper on their Brexit non-plans. Nothing really to see here or inform anybody of more than was already known. As Ian Dunt said on Politics.co.uk:  white it might be, but blank would also describe it.

How much of this is government playing cards to distract us with almost deliberate incompetence to ensure the media is diverted? Or how much is to obscure the real story that lies behind the obsessive secrecy of May’s intentions?

The rapidly rushed-out paper contrasts rather pathetically with Scotland’s Future, published ahead of the 2014 referendum. Everybody knew the objectives of the Scottish Government.

In a mere 77 pages, The United Kingdom’s exit from and new partnership with the European Union covers vague aspirations, if that is not to place the mark somewhat on the high side.  The paper does include interesting data on UK trade from a range of selected years. Data from some years we are told is unreliable and black marks awarded to the Office of National Statistics.

Is this really the best the UK government could manage? The poor quality of the White Paper is discourteous to Parliament and the electorate. Prior to the independence referendum many UK government departments  spewed out thousands of pages arguing that Scotland would be better staying in the union.

One of these from the Secretary of State for business, innovation and skills, Scotland analysis: Business and microeconomic framework ran to 127 pages of detailed argument, filled with statistical data and graphs. It used incompatible data to bolster the case, but that is another story.

The inadequacies of the Brexit white paper are not the real issues. The UK government is involved in news management and hiding more than their strategy to exit the EU. Appealing the High Court decision was typical of May, although she expected the appeal would be dismissed. Arguments around the appeal to the Supreme Court dominated the news agenda for weeks. That was the Westminster government’s gain from the fiasco.

May’s introduction to the ‘Blank paper” is classic delusion so I thought I would look at the first few paragraphs as they indicate that she is in danger of being tied to the ‘America First’ strategy. UK options for a global future are rather limited.

We do not approach these negotiations expecting failure, but anticipating success.

Will let you away with that one. Leaving aside grammar and use of complete sentences the rest gets rather problematic building air castles on wishful thinking.

OK. So all nations tend to think they are great but what makes a nation global? Is it because the UK has a very large deficit in global trade or because somewhere in the world there is a Trident sub on the prowl? If we have so much to offer Europe why are we leaving the EU – the body that does most to promote and safeguard Europe’s interests? Britain’s global influence has been in decline for nearly 100 years.

Whatever influence and contribution Britain has to offer the world took a dramatic hit on June 23 2016, over the next seven months of indecision, the humiliation handed out by the ‘Apprentice President’ and her  curtailed presence at the EU summit in Malta when she was told the EU would manage its own dealings with the US.

May seems to have difficulty with the idea the coherence the EU works towards is now controlled by 27 other sovereign countries and their national governments.

(I think that is enough about May’s White paper because it is something we are supposed to get worked up about like the contradictions on sovereignty or the curvature of bananas).

A bridge too far

The mere mention of a ‘Bridge’ would have sent shivers down the spine of the EU and European governments. There is a tendency to write off the influence of May’s Secretary of State for International Trade, one Liam Fox, a minister with nothing to do as the UK cannot start trade deals until it exits the EU. Meanwhile he is free to travel the world at taxpayer’s expense. Given his history we should be concerned about his intent.

Fox has a colourful history. In the 2009 expenses scandal, as Shadow Defence Secretary, he had the largest over-claim – £22,476.03. On the 17th March 2010 The Telegraph reported he was the conservative frontbencher with the highest repayment appeal to be rejected by the High Court.

Less than two months later David Cameron was Prime Minister and he appointed Fox as Secretary of State for Defence. It was to be a short tenure and Fox was forced to resign over the Adam Werritty affair. Werritty, who  was a close friend of Fox and had been best man at his wedding in 2005,  had lived rent-free in Dr Fox’s Pimlico apartment in 2002/3; An apartment Fox claimed for on his parliamentary expenses.

Werritty was appointed by Fox to run the ultra conservative Atlanticist think-tank, The Atlantic Bridge, founded by Liam Fox in 1997. George Monbiot in the Guardian writes that Michael Gove, George Osborne, William Hague and Chris Grayling were members of the advisory council. Baroness Thatcher was Patron.

Werritty carried a business card indicating he was an adviser to Liam Fox. Werritty also visited the MOD while Fox was minister despite the fact he did not have MOD security clearance.

“The defence secretary has been under pressure since it emerged that Mr Werritty, a lobbyist, had met him on 18 foreign trips despite having no official role. [Verritty] handed out business cards suggesting he was his adviser and was present at meetings [Dr] Fox had with military figures, diplomats and defence contractors.”

Concern over the use of an ‘adviser’ who was not recorded as such with the civil service gave rise to concerns at the number of meetings Werritty attended and his apparent freedom of access.

The MOD conducted their own investigation and Gus O’Donnell published a report after investigating the allegations and concerns:

The Cabinet Secretary wrote: “This highlights the blurring of lines between Dr Fox’s private and official responsibilities which he has since acknowledged was not appropriate and not acceptable. Mr Werritty’s use of business cards describing him as an adviser to Dr Fox gave the impression that Mr Werritty spoke on behalf of the UK Government and/or was associated with Dr Fox in some form of official capacity. This may have been confusing for foreign governments and representatives who may not have understood the differences between a person acting as an external adviser and an adviser to Government.”

“In this case there was an inappropriate blurring of lines between official and personal relationships. Mr Werritty should not have been provided with access to Dr Fox’s diary and itinerary. Nor should he have been allowed to participate in the social elements of the then Defence Secretary’s overseas trips in a way which might have given rise to the impression that he was part of the official party. He should not have had meetings in the MOD with such frequency as did occur, as this access may have provided others with a belief that Mr Werritty was speaking for Government and was part of an official entourage. This impression was of course reinforced by the business cards which Mr Werritty provided to people.”

The full report by Sir Gus O’Donnell, October 2011 can be found here.

Atlantic Bridge’s charitable status was withdrawn when its political activities were uncovered, making it inappropriate for tax relief and forcing the winding up of the operation in September 2011, days before Fox’s resignation. It is understood a wealthy Tory party donor and ex Goldman Sachs banker picked up the bill for repaying the lost tax relief.

During the period Atlantic Bridge was in operation an organisation known as American Legislative Exchange Council (ALEC) set up the Atlantic Bridge Project in 2007. Although separate, the intention was the two parts of the ’Bridge’ would collaborate. The US leg of the ‘Bridge’ was run by Catherine Bray, ALEC’s director of international relations, Bray’s husband worked on Trump’s election campaign.

ALEC is a right wing think-tank, the object of its thinking being to promote opinion and research undermining the international consensus on climate change and other right wing objectives. ALEC announced it was to play a critical role in the new US administration on 14th December.

The world is focussed on the new Twitter President. He makes for instant copy but the real concern should be about the people feeding the Twit President with executive orders to sign and quietly preparing new legislation to radially change the gains in social care, health care and open up a new dawn for fossil fuels.

ALEC claims to write 1000 bills every year with around 200 making it into law. The strategy adopted is to provide lavish hospitality to legislators then send them off with a bill to introduce in their own name. Off you go and take all the credit, we are just here to feed you!

Where does May fit in?

May has not made much of fitting in anywhere on the international stage, but questions need to be asked about her appointment of Fox in his new international role. She was a senior member of government at the time of Fox’s resignation in a cloud of controversy and failure to follow the standards required of ministers of the crown. Yet just five years later she brings him back in full knowledge of his 20 year long contacts with ultra right wing conservative groups and politicians in the US.

His new ministerial role to find trade deals sets red lights flashing. Britain has no cards to play on exit from the EU and will be desperate for results with little bargaining power over deals with a disruptive Trump presidency: An administration stuffed with Goldman Sachs appointments and climate change deniers, well prepared to roll back regulation on anything and everything.

May talks about free trade. A trade deal with this administration will not be free for Britain. Trump will want free access to the NHS. In the US he is setting about dismantling the Affordable Care Act and seeks higher prices for pharmaceutical products in a country that already has inflated medicine costs.

In May’s first visit to the US last autumn as PM she arranged to meet Goldman Sachs, JP Morgan and other leading US business leaders for a quiet chat.

The vicar’s daughter and devote Anglican who lives in a secret world of her own thoughts shared with few, if any, may be closer to Dr Fox’s new world order than we have previously considered.