Low-income families subsidise tax relief and tax shelters for the wealthy. Hit hard are the WASPI women, who were not told of changes to their planned retirement date with adequate and clear notice.

A new study by the Institute for Fiscal Studies (IFS) finds women’s household income has, on average, fallen by £32 a week with the increase in state pension age to 63 last year. The IFS calculate the changes has saved the Treasury £5.1bn.

These are changes at the wrong end of the pension tax relief spectrum.

Now another inequality has come to light. Auto enrolment comes in two versions and low earners, most of them women, are losing out on the tax relief dished out in bucket loads by the Treasury to the wealthy. Tax relief at the basic rate tends to be pretty straightforward for systems geared to dealing with it. The Treasury will pay up for non-taxpayers contributions at the basic rate but you have to be in a pension scheme set up to ensure tax relief is available.

Auto-enrolment does not come with a requirement to ensure the pension payments of low earners are subject to tax relief. Writing in Money Marketing, Dr Ros Altmann, a pensions expert and campaigner, has highlighted this inequality and the refusal of government to amend legislation to ensure the low paid are all treated fairly. Some of the responses she has received from officials are shocking.

Dr Altmann explains that auto enrolment on a net pay basis does not allow earnings less than £11,500 to access the 25% bonus of tax relief. She wrote: “Auto-enrolling these employees – mostly women – into a net pay scheme forces them to pay extra for their pension.”

The transfer of pension tax relief to the wealthy continues to flow out of the back door of the treasury. For every £8 a basic rate taxpayer puts into their pension the Treasury add £2. The 20% tax relief is calculated on the total, not the net contribution. So the little extra from the Treasury is equivalent to a 25% payout.

For a higher rate taxpayer the net payment is just £6 for after tax relief. “Lovely jubbly” as the man in the old yellow Reliant van would say – a return of 66.67% on the original contribution. For an additional rate (45%) taxpayer, for each £10, the net cost is just £5.50 – equivalent to a payback of 81.82% after tax relief.

Based on annual contributions of 1k on a net pay basis and 1k, 80k and 40k at relevant tax relief rates – this is how the return on net investment looks like for these income groups. 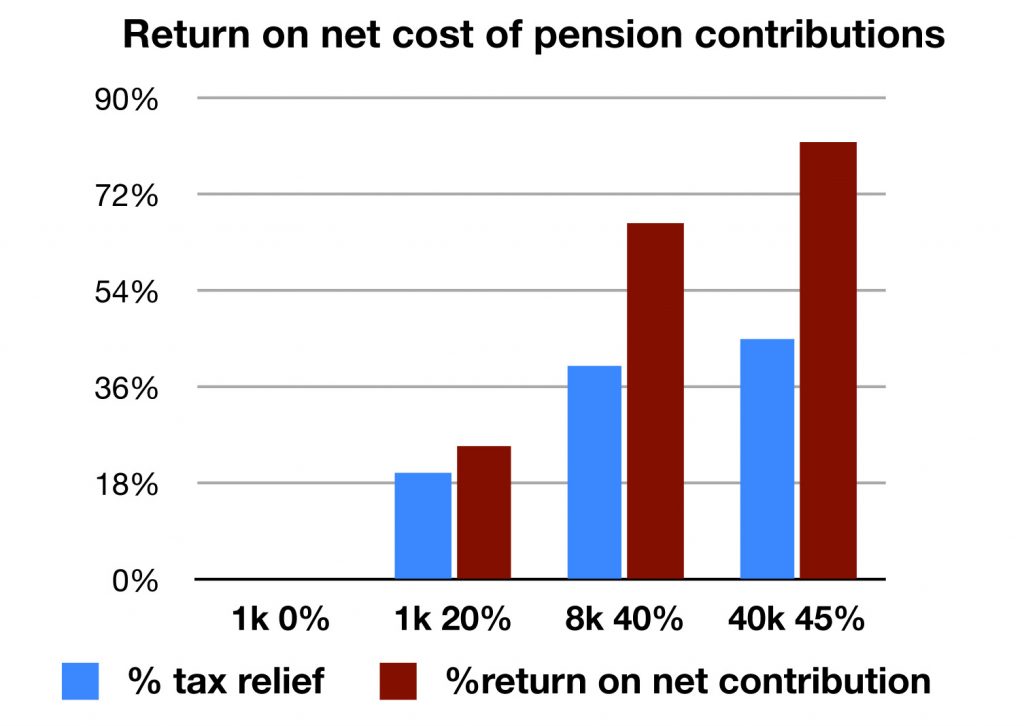 Midas lurks in a Treasury back office turning lead into gold for the wealthy.

Tax relief to encourage people to save for their later years has merit but the leakage from revenues is beyond reasonable. Pension tax relief costs £36bn a year. Restricting relief to the basic rate for everyone would save £13bn – more than enough to restore the cuts to benefits the departed Osborne introduced and came into force this tax year.

When the government set up auto enrolment it left it to providers to administer schemes for employers. As some schemes are net pay schemes the tax relief is out of reach for low earners. The government has not sought to intervene either – to save the costs of tax refunds or because they believe in leaving these things to the market. More a case of both, I suspect.

Ros Altmann challenged the department about this and was told: “it was not much money”. £2 in every £10 would buy these low earners, stuck on a net pay scheme, their pension at a better price and over the years the amount becomes significant. 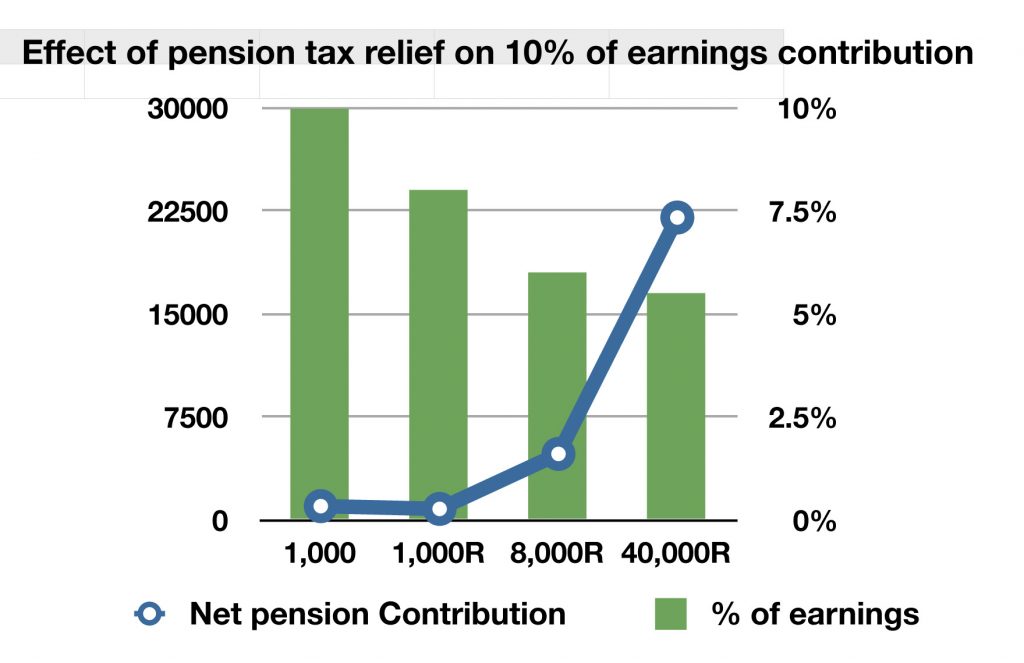 These graphs show the impact for a range of net contributions and tax relief. To keep it simple I have selected incomes of £10k in a net pay scheme and £10k in a scheme claiming tax relief. Both of these are at the basic rate. Then I have included an income of £80k with tax relief at 40% and finally an income of £400k with tax relief at 45%. In all case the calculations assume that each individual is contributing 10% of their gross earnings into their pension pot.

Anyone earning £10,000 could not afford and would not pay up to 10% of gross earnings into an auto enrolment scheme. Technically a self-employed person could with a Self Investment Pension Plan (SIPP). I standardised contributions at 10% of gross income because high earners have this capacity. £40,000 is the maximum annual contribution into a pension. 10% in contributions therefore inflates the amount of tax relief that would realistically available to low earners. They simply cannot compete in the pensions tax savings stakes. See for qualifying earnings and details of minimum contributions that rise to 4% after 2019. 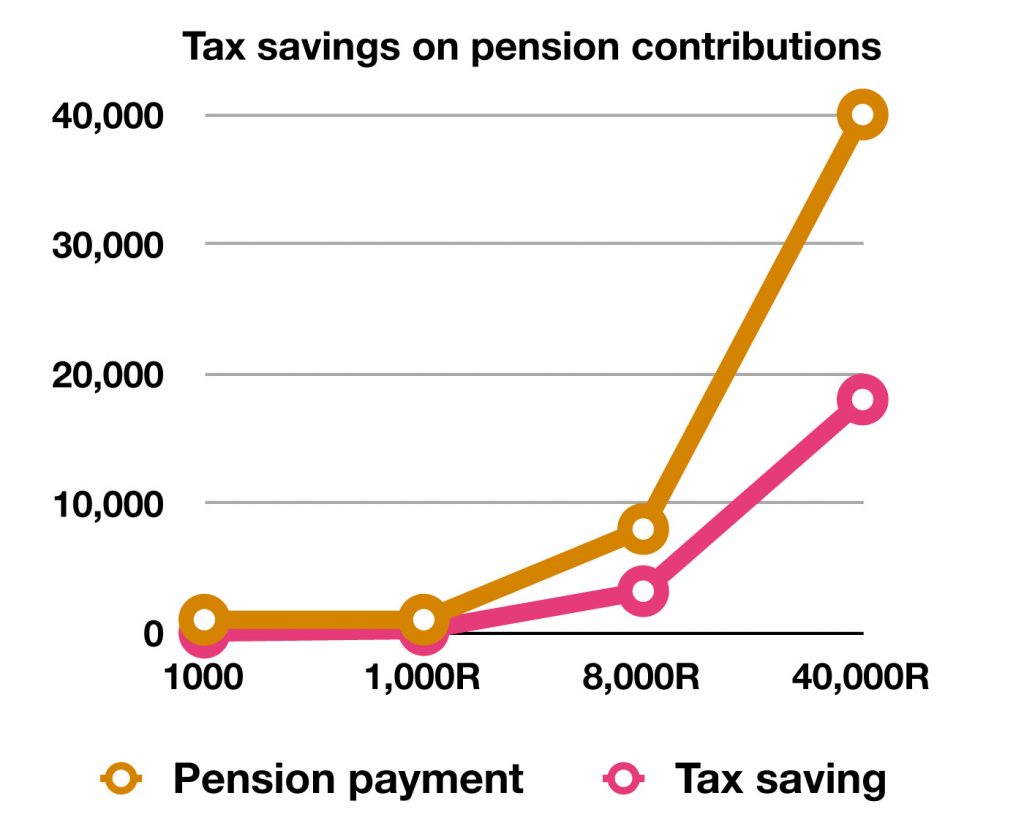 David Cameron appointed Dr Altmann to the Lords to make her Pensions Minister in May 2015. The appointment was widely welcomed by the pensions industry but crossing from being an expert and campaigner on pension issues to ministerial responsibility does not always turn out well.

Indeed it did not, and in her resignation letter in July 2016 Dr Altmann criticised pension incentives that unduly disadvantaged the lower paid and disproportionally gave advantage to the wealthy. She supports a flat rate of at least 20%. She also supported the Waspi women who she felt had been given inadequate notice of the changes and could be further disadvantaged by the acceleration of pensionable age.

Ros Altmann was clearly frustrated in making the changes she believed were necessary. In her resignation letter she pointed out pension tax relief cost £40bn a year.

She wrote: “As an economist and investment professional who has been involved in all aspects of pensions for nearly 40 years, I am at heart a policy expert, rather than a politician.

“As a Minister, I have tried to drive positive long-term changes on pensions from within Government and ameliorate some of the past mistakes which I have cautioned against. Unfortunately over the past year, short-term political considerations, exacerbated by the EU referendum, have inhibited good policy-making. As the country heads into uncharted waters, I would urge you and your new team to enable my successor to address some of the major policy reforms that are needed to improve pensions for the future.”

Theresa May clearly was not listening, as she is wont to do. The general election Dementia Tax fiasco would not have arisen if she had paid some attention to Dr Altmann. In another part of her resignation letter she wrote: “We must, too, address the crisis in social care funding and help people provide for potential care costs as well. In order to help fund this, we should look to develop a ‘one nation’ lifetime pension.”

This is an idea well worth teasing out. If the Scottish Government were to invite Dr Altmann to act as an advisor on a future Scottish pensions structure she might find a meeting of minds she failed to discover in a Conservative government, unable and unwilling to tackle inequality and tell the wealthy – ‘you are costing too much’.

A member of the Labour Party until 2007, Baroness Altmann sits on the conservative benches. I can’t help feeling she might be more confortable as an ‘independent expert on later life issues’ with a move to the crossbenches.

The Scottish Government and the SNP need to work on future pension policy. It will be an issue when the next Independence referendum is held. With another change in the rate of increase in the pension age announced last month, bringing forward, by 7 years, the pension age to 68 it is timely to be concerned about the long-term future of the state pension and contributory pension schemes.

There is a window of opportunity to design a new system for pensions in an independent Scotland that embraces the challenge of social care in a holistic structure.

I wrote and directed this video just before the general election, recruiting some volunteer ‘actors’ from the ranks of Yes Berwickshire into The Don’t Vote Tory Theatre Company. The magic money tree has a lot of very fleshy leaves for those with the income to take advantage. It is still very relevant because we all have a bundle of tax allowances and access to tax shelters only the few can take full advantage. This video covers just some but it gives a taste of inequality set in fiscal rules under the Tories.

End note: Dr Altmann in her resignation letter quoted tax relief as costing £40bn. She should know. There are a number of figures with estimates up to £50bn. It depends on the total people decide to contribute each year but is clearly on the increase. I tend to use £36bn in articles but is quite likely a bit out of date.