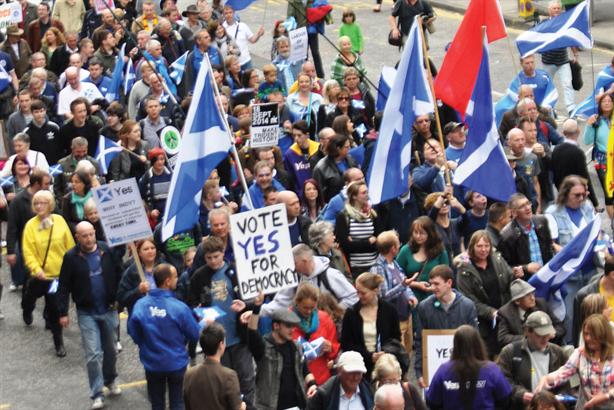 It’s difficult to know how many “interesting times” we can inhabit simultaneously but the circumstances of the next referendum takes interesting into a new dimension.

We’ve had Pete Wishart with  his “optimum conditions for success”, then there’s the follow up from Andrew Tickell with his enigmatic assertion that the Scottish Government explain why the Scottish citizenry should care about the challenges of Brexit. And, just to help the MSM get excitable about the stairheid rammy, we got Jim Sillars and his 60 per cent target. A genuine discourse, or fatal fissures in the Indy camp?

For his part Pete Wishart cited polling evidence from his own constituency. Well there’s a surprise. In a political landscape across which the quaint Nicky Fairbairn strode like a tartan popinjay, the Ruth Davidson Party has been banging on at every opportunity that the SNP need to forget about a second referendum and get on with the day job. Maybe Peter’s canvas returns show that the strategy was working, at least in Perthshire.

But if the Yes campaign is to succeed we’ve got to stop being corralled by the unionists agenda. We need to do things differently.

The issue now is not the optimum runes for success in another referendum, it’s no less than repelling the existential threat to Holyrood and the complete dismantling of all that’s been achieved in our own Scottish parliament and our national self respect. What is at stake is a future for Scotland as an independent country NOT as a vassal state in continual thrall to England with its grand plans for casino economics.

As we accelerate through the vortex of interesting times in which May conducts the country’s international affairs without reference to parliament, her supporting role of the Orange One in a real life Dr Strangelove world, means the Clyde estuary becomes the human shield for the Britnats nuclear arsenal.

Then there’s the emergence of the New Act of Union from the ostensibly ‘cross party’ Constitutional Reform Group with Ming Campbell the token Jock.  All of which means Brexit is being left trailing in the wake.

For those of us who take refuge in the Declaration of Arbroath and the sovereignty of the Scottish people, the forthcoming judgement of the Supreme Court on the Scottish Parliament’s Continuity Bill is awaited with interest. The Supreme Court has got form as we all know with the Sewel Convention but equally there’s, their little discussed judgment in favour of the Scottish Parliament’s Bill on Asbestosis Plaques. In his enlightening Sovereignty for Dummies Peter Thomson claims that the Supreme Court acknowledged that it “had no power to set aside any bill, statute or act of the Parliament of Scotland where that bill expressed the clear will of the (sovereign) people of Scotland”.

However the Bill was clearly a discourse on a social policy issue and I hae my doots if we can rely on them to uphold the Continuity Bill. Their Lordships of the Supreme Court are the British establishment after all and the British Establishment is under threat from an increasingly belligerent Scotland and Scotland’s interests always fall with the arithmetic in the English Parliament. Remember the ’15 landslide when Scotland had 56 SNP MPs in that place yet this was still insufficient to get any amendments adopted to the Scotland Bill.

It’s vital we stop playing by the English Parliament’s rules.

So what’s to be done? Well what is needed is not soothsayers with iPads in the fog of battle but leadership of the highest quality for an epic victory against Viceroy Mundell’s alternative Scottish Office administration waiting in the wings to  take powers back from the EU to Scotland but not to Holyrood. In the event of the Supreme Court striking down the Consolidation Bill, the FM must recall our MPs from the English Parliament. In a Scottish Convention reconvened in Edinburgh all representatives of the people elected on an independence prospectus declare a suspension of our participation in the Treaty of Union in the first instance and begin the national debate how to move Scotland into her new future.

Peers such as Michelle Mone and Alan Sugar are to have more of a say on the future of Scotland and it’s Parliament than our elected MPs.

Enough of reasonableness. Enough of turning the other cheek. We need to be biased in the pursuit of our independence, not reasonable. We need our own version of project fear. We need to be belligerent in our challenge to the Britnats and their naked self- interest in pursuit of Home County values (even if they live in Perthshire or Morayshire)

It’s maybe pertinent to reminded ourselves of the  Norrmalmstorg bank robbery in  Stockholm, in 1973 and what gave its name to the Stockholm syndrome.

Never before has the cause of independence been closer to its goal yet it begs the question, has the SNP’s  gradualism and getting on with the day job induced the Stockholm syndrome when it comes to our country’s independence? Why should we be hostage to opinion polls so readily manipulated by unionist corporate interests? Where is the Scottish passion for a cause? Now is not the time for “optimum conditions for success”. We’ll never get to 60% without a campaign.

How the Tories gamed devolution and why we can’t let them...