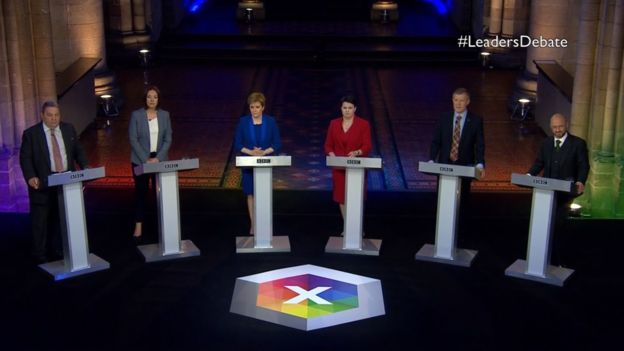 She was called Diana Gould and came from Cirencester in Gloucestershire, a middle aged, middle class lady from the shires. She appeared on Nationwide in 1983 and was invited by Sue Lawley to put a question to the Falklands victor Margaret Thatcher. ‘Why’, she asked calmly, ‘when the Belgrano was outside the Total Exclusion Zone and sailing away from the Falklands, did you give the order to sink her?’

After Thatcher’s first attempt at answering – claiming it was NOT sailing away – Ms Gould persisted with a measured, informed and detailed interrogation that had the Iron Lady melting in the studio cauldron.

‘No, Mrs Thatcher’, she interrupted and the hesitations and emergency re-phrasings of the previously untouchable PM gave the game away. She was struggling in the face of the politician’s nemesis – the informed punter. The indomitable Mrs T was squirming and it became uncomfortable viewing. Mrs Gould, sounding like Miss Marple gravely informing the police inspector where he was going wrong, was having none of it. Lawley, sensing the temperature rising as Mrs T rotated on the roasting spit, intervened to help out.

It made the news…How Thatcher was skewered by a little old lady. The tape was re- played at that year’s Edinburgh Television Festival in front of an audience of journalists. (The correct collective being A Sewer). We laughed in recognition and enjoyed again how a member of the public had done what we all wanted to do and pin her down on her wilful destruction of human life. That was our narrative as a media and it was accepted wisdom in our circle – the Belgrano was running and Thatcher knew it when the order was given.

Just as we gorged ourselves on the memory, that old hand Roy Hattersley, who was on the guest panel, spoke up. ‘And if you think that went down well with the British public, you don’t know them’, he said. He censured us for being out of touch because most people really didn’t like to hear a leader being humbled that way, not when the country had been at war and life-and-death decisions had to be made – and made in favour of our sailors and soldiers. Many remembered Hitler’s war and understood the needs of the time both in lethal decisions and leadership. With our own prejudices and outlook as a media, we lacked real understanding of voters. He left us chastened.

I don’t know if Roy was completely correct in his assessment but it came to mind during the television debate when another punter – a nurse – complained to Nicola Sturgeon about her wages. She couldn’t manage on them and used food banks, she claimed.

Cue uncomfortable questions for the FM and, of course, a media establishment loving it. Over in the Spin Room – God, but it’s tiresome and derivative, isn’t it? – The Daily Labour’s David Clegg couldn’t hide his delight. ‘The nurse is the story’, he announced proudly. I immediately recognised the syndrome – the hound chases the rabbit without noticing the juicy steak in his bowl. The story is whatever hurts the Nats and nurses confronting the leader is it and…and…foodbanks! Jings! Even the spoon-fed hacks couldn’t miss this. It fitted their narrative, the one they’ve pursued for a decade and more now – the SNP gloss is losing its sheen.

But what stood out for me from the exchanges was something entirely different. It was the message that nurses in Scotland are paid more than nurses in any other part of the UK. It was a chance to point out that when put on the spot with a tough choice in difficult circumstances, the SNP deliver. An independent review body decides how much nurses should be paid and the Scottish government didn’t hesitate. It paid up. There was no doctors’ strike in Scotland for the same reason. In what they call Band 5 a nurse can be £300 better off than in England. The latest deal gives anyone below £22,000 a minimum rise of £400 and entry level pay for staff is £880 higher than England.

Now it ain’t easy and Sturgeon wasn’t hiding from the effect on budgets of austerity, quoting her own sister’s views as a nurse. But, ask a non-aligned member of the public if they recognise the dilemma for a government of reducing budgets which have to be balanced. Ask if they think it reasonable to allow independent analysis to suggest an appropriate level of pay. Ask if it seems reasonable that Scots nurses get a better deal. Ask who you imagine would pay more if it were possible – Sturgeon or Theresa May.

See? People whose eyes remain open, understand the complexities beyond the anger. Sure, they’d like nurses to be paid more. But what about teachers and police? Care home assistants? Social workers? If health budgets increased in the UK, they would rise here too. Sturgeon expressed the frustration that lies at the heart of the independence debate – we don’t control our own resources. Those same people will see Sturgeon challenged directly, like old Ms Gould did 34 years ago, and ask themselves if our nurse was being entirely reasonable given the national finances. After all, we are told they are still in a dire state UK-wide as Osborne’s deeper benefit cuts are only beginning and the Tories are waiting in England to take your house if you need old age nursing.

The media pros will imagine that this was a straight hit on the SNP but when the blinkers are removed, I’m not so sure. Canny Scots will note that no party is promising higher pay rises for nurses and Labour would take 1p in the pound away from them. Does anyone imagine nurses will fare better under the Tories?

No, I think Nicola may have had her Belgrano moment and, like the journalists of the 1980’s the media is reading it wrong.

Here is the news: NHS Scotland performs better, but you may...