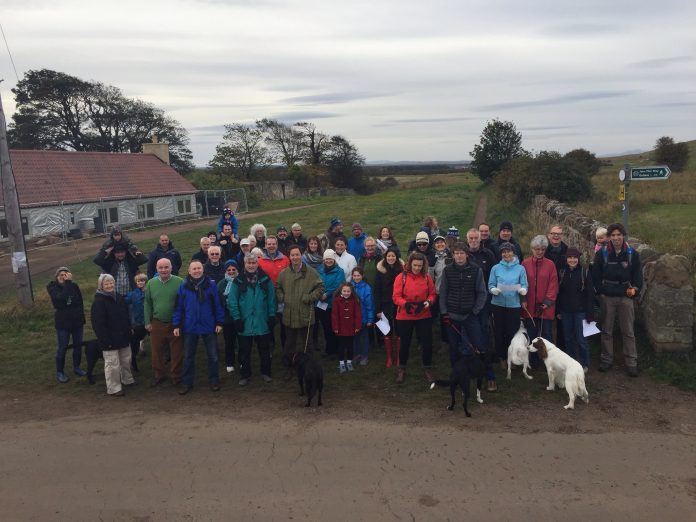 A long-running campaign to secure a safe path between two East Lothian towns has come up against local authority indifference and a local land-owner in a row that threatens to undermine the spirit of the Land Reform Act.

Sixty local people joined a weekend local protest, which comprised a walk through the disputed land that connects Drem and Gullane. The row strikes at the heart of land reform legislation passed by the Scottish Parliament a decade ago in 2005.

It also underlines the difficulties of achieving community land improvements in the face of an unwilling landowner, in this case one who wants compensation for a thin 1.2km strip of land. The land changed hands after the idea first won support from local communities. The new owner, a farmer, is seeking financial compensation, the value of which is unknown.

The campaign to build a safe walking and cycling path between the two towns has dragged on for nearly 10 years. Although East Lothian Council set aside money – believed to be around £100,000 –  for the  completion of so-called “core path 357” several years ago, campaigners believe the council is losing interest in the face of continued problems negotiating to buy the land and implement the project.

They are now trying to establish the council’s true position via Freedom of Information legislation, illustrating frustration at the continued impasse.

In several other cases in East Lothian, landowners have effectively donated their land to enable access improvements, as envisaged under the act. In this case, the owner wants to be paid, and that may be difficult for the council to justify.

The weekend protest was supported by local MSP Iain Gray, who said:

“In the end to get the core path the two communities of Gullane and Drem want, we have to get the landowner to agree to some pretty minor works and the community needs to keep on trying to get that agreement. The great turnout for today’s community walk shows that people are not going to give up on this. That’s the message I’ll give back to the council. We need to keep working on this and give communities what they want and need.

“It was a salutary lesson for me too. MSPs can pass all the laws we want in Parliament, but it often requires local action and long term persistence to turn those rights into reality “on the ground”.

Campaign supporter Iain V Monk said: “More than 60 local people took part in Sunday’s walk. It underlined the community spirit that has, for years, underpinned this campaign. We were delighted that the local MSP, local councillor and community council representatives stood shoulder to shoulder with us today. There was a real feeling of solidarity and a determination to keep pushing to deliver a safe, off road path linking Gullane and Drem.”

Campaigners say the council can use the Land Reform Act powers to force a compulsory purchase or similar notices on the landowner, but officials say they do not have the legal powers to do so. The FoI requests are to establish what the nature of the council’s legal advice.