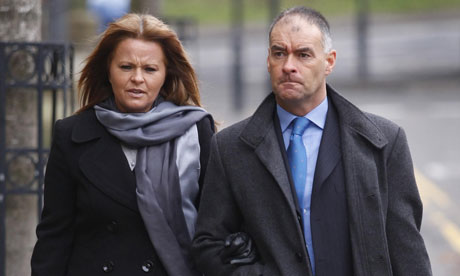 The News of the World has at last won its vendetta against a left wing politician. It has done so with the connivance of the Lord Advocate. If at first you don’t succeed keep trying. Scottish justice has notched up another political miscarriage of justice alongside that of Al Megrahi and Muir of Huntershill.

This remains to be said. For the Lord Advocate to bring this case was a prostitution of Scots law. The Lord Advocate is a member of the Scottish government and the government was the pimp. The aim was not to seek justice but to placate Rupert Murdoch and the News of the World.

Consider this. In every case where someone seeks damages there are two sides. Mr Sheridan won his civil case because the jury believed his witnesses and disbelieved those for the News of the World. In the eyes of the law and in the eyes of common sense these latter witnesses were now tainted. Yet they were then called by the crown against the Sheridans. In a criminal case a jury must decide the issue of guilt beyond reasonable doubt. I can think of no better example of reasonable doubt, than a case which rests on the evidence of witnesses already discredited by another jury. In all my years as a lawyer I have never known a case where the successful side in a civil action was prosecuted for perjury. If anyone had to be prosecuted it was the side held to have lied under oath.

No doubt the Lord Advocate was leant on by Rupert Murdoch’s employees. The Lord Advocate is a member of the government. Very likely they did some leaning too. It was not the money that mattered to the journalists. It was their pride. They were prepared to spend the same sum that Mr Sheridan got in damages on buying a video from a known thief. No attempt was made to have the tape examined by a voice expert. It was presented as it came as though it needed no further examination. I have never known a prosecution case that relied on voice recognition to go to a jury without being supported by expert testimony. In this case there was none.

The case raises wider issues still. Who is responsible for the behaviour of our police? They spent thousands of man hours and over a million pounds on this investigation, while the gangster bosses go free. All the police do with the gangsters is make it hard for them to get contributory pensions: yet they spend prodigiously where a press baron is offended. Dear God! Has it come to this!

But that is not all! Mr Sheridan is a political figure. The police don’t like his politics. Neither do I, but neither of these facts matter. Fifteen of them burst into his house where they knew there was a three-year-old child. They terrified the whole family including the child. She hid in a spasm of terror behind a sofa. She will remember that all her life. The Sheridans are not violent people. They are public figures untainted by violence. The violent people were the police. Why did it take fifteen policemen to burst in when the suspects would have gone to a police station if asked?

But that is not yet all! Mrs Sheridan was then senior air hostess with BA in Glasgow. (She has since retired.) She had a collection of whisky miniatures exhibited freely in her living room. The police without further enquiry charged her with their theft, and leaked it to the press that they had done so. This attempt to blacken her character was an affront to justice. It caused her to be suspended from her job, while her employers made the enquiries the police should first have made. Normally you don’t charge someone with theft unless someone has complained of theft. BA found the whisky miniatures were not stolen and reinstated her. This attempt to pervert the course of justice by blackening Mrs Sheridan’s character is an affront to justice.

I declare my interest. I am a friend of Mr and Mrs Sheridan. We have some political interests in common. I also am a republican. That’s about as far as it goes. But greater even than my loyalty to my friends is my loyalty to the law of Scotland. I spent a lifetime trying to uphold its standards. The prosecution of Mr and Mrs Sheridan was against every known principle. It was motivated entirely by a desire to placate a powerful press baron. Scots law used to boast that it protected the weak against the strong. Now it lies in shame.

Next year it will be made even more shameful when the Lord advocate is rewarded by being made a judge.

This article was originally published at The Firm magazine.