As the packed number 19 bus rolled past George Square the day of the referendum results, one man suddenly perked up at the sight of a small group of Remain protestors holding EU flags.

Someone from the front of the bus stood up and declared ‘Aye, out in October!’

And the bus cheered.  The tension of travelling in a beat up metal box relieved for a moment before settling back into our own headspaces.

The conversation behind me drifted off until we heard the same man correct a child:

‘No it’s not ‘police’. In Glasgow we call them Polis. Or bacon.’

And again we lifted our heads and laughed together.

Friday was a day world’s apart from this country’s last referendum.

As the same bus rolled past George Square on the 19th of September 2014 it was fear that united us.

Waiting at the stop across the street I watched as one man, his face contorted with hate, approached every young woman wearing a Yes badge and spat the word ‘slut’ in their face.

Before one could react, he had marched down the street to find the next one.

Frozen in fear at the end of this line, I was ashamed at my inability to intervene. To protect. I simply waited my turn to be abused.

Speaking to a policewoman a week later, I heard that same frustrated helplessness. The disappointment that our city is one of the friendliest opinionated places but the occasional flares of aggression makes so many people afraid to walk their own streets. Afraid of being noticed. To speak freely.

As the same bus dumped the Sunday lunchtime community off in town yesterday we stepped right in front of an Orange Walk. The police tried to make us wait but we all marched forth anyway. Our lips rolled back in uncontrollable sneers at the hatred behind us. But we dissipated into the city and the walk continued to control its route. Doors locking, people moving inside. Let it pass. Do not engage.

As I watched a couple thousand Sister Sledge fans sing along with the band: ‘Glasgow Family, I got all my Weegies with me’ in the Kelvingrove Bandstand I could feel the fear of uncertainty lift for a moment. Pissing down with rain, tired on our feet but there wasn’t a frown in the site, no body resisting the urge to dance in their own way.

I finished my weekend in the Sub Club. Subject to its own fearful smear campaign where an argument about a lack of diverse Djs and the safety of its women punters had escalated out of control with both sides getting too heated.

I haven’t been clubbing in years. Partly because yes, there is always the chance of a bit of harassment whenever you go out, always a chance you meet the only arsehole in the club.

But the real reason I stopped clubbing was my own confidence. The confidence to walk into a venue and dance like a fanny. To dance out the fear. I still wanted to hold on it. I thought I could learn something from it. Acknowledging a history of sexual assault is no easy task and it darkens our view of the people around us. 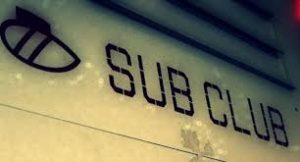 The Sub Club on a good night is like no other club in Glasgow. With a sound system designed to engulf you, a crowded dance floor where everybody is in each others personal ‘safe’ space we can become more human again.

Music and dancing have been an intimate life partner through the history of our species. It has always been a way to understand one another through manic movements, a bass line to move with and physical contact.

Last night was a crowd of equals. I bumped into so many of the women I used to see in that claustrophobic sweatbox. The majority of us not looking for a sexual partner but a release of another kind.

An emotional reset to face the week ahead and put our worries to the side for a few hours.

We do not know what will happen next.

The bickering debates, speculation and political preaching is a distraction from our grieving process for not getting what we want. The world is not a playground for utopian hopes. Whether that utopia is one of equality or bigotry.

If we face a second independence referendum we have to learn from these past couple of years. Re-enter our communities and touch base with different opinions.

Glasgow was buzzing with conversation on Friday. It broke down the false sections of society, crossing generation, gender & nationality borders. Everybody was scared and confused. Nobody knew what to do.

People do not change their minds with screaming scare tactics. Understanding our own motives and showing compassion for others is the first step to informed decisions.

We cannot change what has already happened. We can only ensure we don’t make the same mistakes again and move forward.

Nation to Nation: The Problem of Speaking for Britain