The editor of BBC Scotland’s flagship news programme Reporting Scotland has hit back after the programme came under fire over its reporting of First Minister Nicola Sturgeon’s current visit to China. 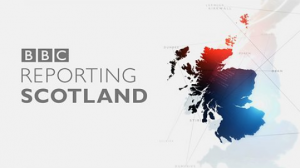 Andrew Browne defended Monday’s edition of the programme after an academic and leading critic of the BBC  claimed it had over-emphasised the newsworthiness of comments made by former First Minister Alex Salmond on a BBC political programme on Sunday. It was alleged that, in doing so, the news programme had given subdued coverage of his successor’s trade visit.

On Monday evening Reporting Scotland had featured coverage of a high profile visit to the People’s Republic of China by Nicola Sturgeon.  The First Minister was there in order to bolster Scotland’s profile in one of the world’s biggest emerging markets and help secure lucrative trade deals.

However viewers heard the reporter claim the official visit had been “overshadowed” by comments made in  the Sunday TV interview.  The programme claimed Mr Salmond’s interview, in which he said he believed a second independence referendum was inevitable, had “dominated” that day’s news.

“Another referendum is not a story for the Chinese so it can’t overshadow anything there.  As far as I can see  they’re a lot more anxious about us pulling out of Europe.”

On BBC claims that the Salmond interview had dominated news that day, the University of the West of Scotland academic said wryly:

“Well STV reported only on the trades deals and in a positive light.  They don’t seem to have found the next referendum dominating things back here.”

Bolstering his argument, Professor Robertson cited Scottish newspaper coverage that day, including the Herald, Scotsman and the Daily Record, adding:

“None of these reports mentions the referendum.  The Independent, Telegraph, Daily Mail and Guardian do not report at all on the trip.”

Professor Robertson’s view was supported that morning on Radio Scotland, which revealed only one newspaper had headlined the Salmond interview:

The academic ended his piece by reproducing a news report from a Chinese news agency which reported positively on the First Minister’s visit, detailing significant investment and job opportunities.

However, his article drew an angry response from the Reporting Scotland editor. Within a series of tweets  Browne questioned the reference to the Chinese news agency:

“So are censored Chinese news services and govt press releases what you reckon we should aspire to?”

Responding to claims that Mr Salmond’s views on independence and another referendum were already well documented and not in any way news, Browne tweeted: “Is reaction to the former FM’s views not news?”

The BBC Scotland editor also responded to suggestions that the Reporting Scotland item was not evidence based, saying “…evidence-based isn’t entirely how journalism works”. 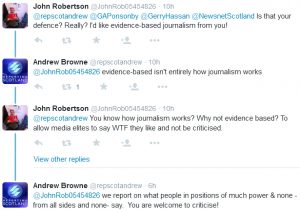 The results were highly critical of BBC Scotland and suggested the broadcaster had a tendency to favour the anti-independence campaign in news reports relating to the referendum.  Professor Robertson was then subjected to what he described as bullying at the hands of officials at the BBC Scotland HQ.

Bosses at BBC Scotland sent a stern email to the academic, copying it to his superior at the University of the West of Scotland.  The email was sent by BBC Scotland Head of Public Policy & Corporate Affairs, Ian Small.

In the communication, the BBC official called into question the credibility of the study, saying the BBC had “serious concerns with the methodology applied” as well as the “factual accuracy” of the reportís conclusions.

Commenting tonight on the latest exchange, a spokesman for Newsnet.scot said: “Although many of our readers will not agree with Andrew Browne’s remarks, we were very pleased to see him respond to criticism of his programme so directly. The BBC needs to engage in a far more meaningful way with its critics, and there is no doubt that some of those critics have some respect for those, such as the reporter James Cook and environment correspondent David Miller, who have been willing to discuss issues in public and respond to criticism, at least to some extent.

“We are aware that there has been upheaval within BBC Scotland news and current affairs recently, and hope that Andrew Browne’s intervention today is a signal that the organisation may be more willing to join debate rather than shutting up shop when it faces sincere and heartfelt criticism. As the jargon has it, the BBC has stakeholders and many of them have not been happy with the way it covers Scottish politics. Hopefully there is glasnost in the air…”