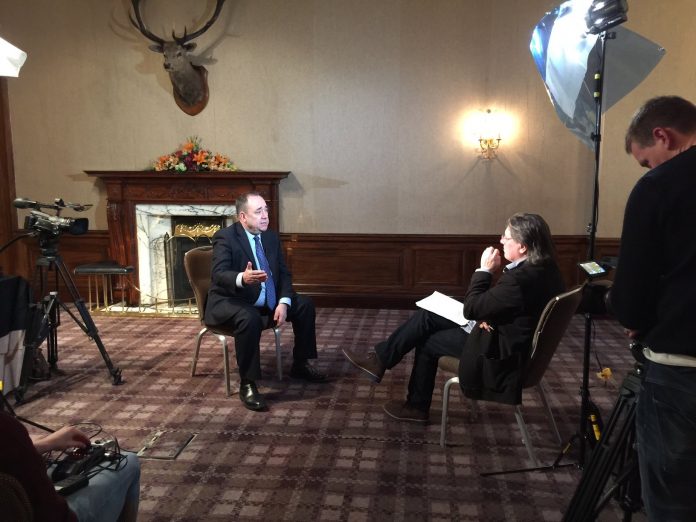 Alex Salmond relates the tussle with the Unionist parties over the question of a “Devo Max” option on the referendum ballot paper, in this final 30-minute part of Newsnet.scot’s series of videos recorded in Edinburgh.

The former First Minister told his audience that Prime Minister David Cameron had refused to back the Devo Max question being added because he had been advised that the independence referendum was an opportunity to destroy the SNP.

Salmond said Cameron had been told that a straight Yes: No vote would result in an overwhelmingly victory for the Union, with just 28 per cent of people likely to back independence.

He believes today that Labour’s big mistake was to take a similar view, refuse to take up the Devo Max option, and throw in their lot with the Tories and Lib Dems within the Better Together campaign.

The response came in a free-ranging question-and-answer session before a 250 strong audience and chaired by Newsnet’s Derek Bateman.

This week Newsnet will also make audio versions of our Alex Salmond films available on Newsnet Radio and Bateman Broadcasting.

Newsnet.scot is run by non-salaried volunteers and needs your continued support through donations and subscriptions. Please help if you can – https://newsnet.scot/donate/

Bateman: SNP would do better by ignoring pressure to respond to...