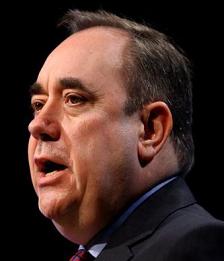 Either Scotland stays in the Westminster straitjacket of low growth, public sector cutbacks and blighted futures or we take responsibility and deliver the better society we all want.

Scotland’s First Minister Alex Salmond has called on Scots to release themselves from the ‘Westminster straitjacket’ of low growth and cutbacks and to work together and take responsibility for building a better society.

Speaking in front of a packed audience on the last day of the SNP’s conference in Perth the SNP leader argued that in order to protect herself from the fall-out of the UK’s financial deficit Scotland must have at her disposal the tools of an independent nation.

This was not a speech laden with bombast and empty rhetoric, this was a thoughtful speech that drew heavily from Scotland’s social democratic past, sense of fair play and community.  There were references and quotes from the founder of the SNP Robert Cunninghame Graham, the late Edwin Morgan and Jimmy Reid.  However the central theme of the speech was the message that there is only one alternative to Westminster’s cuts – independence – and a challenge to all Scots to work together for a better future.

Mr Salmond opened with a reference to the Commonwealth Games in Delhi and congratulated the Scottish team on their performance.  There then followed predictable attacks on the opposition parties and some humerous asides, with the Labour front bench at Holyrood compared to the characters from the movie ‘Night of The Living Dead’ and their leader Iain Gray described as ‘The Invisible Man’.

The recent joint presentation to the UK’s Defence Minister was presented as an example of how the SNP are willing to work with other parties if it is in Scotland’s best interests.  However the SNP leader reaffirmed the party’s total opposition to Trident calling its planned renewal at a cost of £100 billion as ‘a criminal act’ and an ‘obscenity’.

Mr Salmond was visibly angry when reminding the hall of Labour’s refusal to back minimum price of alcohol saying of the stance adopted by Ian Gray’s Labour group:

“I look through their arguments and find not the clear blue water of difference, but the sandy grit of opposition for opposition sake.

“It is pathetic that when faced with a real challenge to public health which requires the collective will of the Parliament, Labour ran away from the battle.”

The First Minister listed some of the achievements of the SNP government including an end to tuition fees, removing bridge tolls, freezing council tax, removing prescription charges and 1,000 extra policemen.

There was also a commitment to the NHS and a promise that under the SNP, Scottish Water would not be privatised.  The First Minister highlighted Scotland’s phenomenal renewables potential and declared that the Scottish government would seek to take control of Scotland’s resources from the London based Crown Estate to ensure that the Scottish people benefited from the nations resources.

Mr Salmond announced that an agency would be set up to co-ordinate both Scottish Water and the nation’s vast renewable potential and then dramatically revealed that world renowned and Nobel prize winning economist Joseph Stiglitz had agreed to advise the Scottish Government on the nations economic future.

This was a sensational announcement and one that stunned the audience.  To have secured the services of someone of such international standing is quite an achievement.

Mr Salmond wound up his speech in a surprisingly sober yet intense fashion and set about explaining that independence was not about flags or anthems but was about having the power to create jobs and a better society.

The First Minister said:
“The Independence I seek is the independence to create jobs. The powers I wish for us all are powers to protect us all. This is not an arcane question removed from the people – it is the people, you and me, and how we protect our society, and grow our economy.”

A defiant Mr Salmond pledged to fight for the people of Scotland and for a better nation insisting that he intended to remain Scotland’s First Minister:

“And I know where we are going – I am the First Minister of Scotland, and I intend to continue to be, not because I have all the answers, but because I have the absolute commitment, the experience and above all that sense of national purpose.