Campaigners fighting to save a Coatbridge Primary school from closure have accused their local council of lying after losing their case at the Court of Session.

The group, made up of parents and relatives of pupils attending Gartsherrie Primary school, were ordered to pay half the court costs.  They have now refused to speak to North Lanarkshire council and have turned instead to the Scottish government for help…. 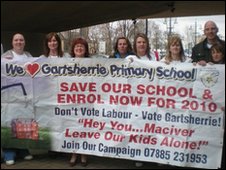 Campaigners fighting to save a Coatbridge Primary school from closure have accused their local council of lying after losing their case at the Court of Session.

The group, made up of parents and relatives of pupils attending Gartsherrie Primary school, were ordered to pay half the court costs.  They have now refused to speak to North Lanarkshire council and have turned instead to the Scottish government for help.

Campaigners began a sit-in at the school as lessons ended on Wednesday 2nd June.  The group has now asked to speak to SNP leader Alex Salmond or a senior government minister.

One parent, Kay Rowat, whose son is a pupil at the school said: “We took the council to court and lost, North Lanarkshire Council carried on with their lies into court and we’re having to pay the expenses, we’ve to pay 50 per cent. All we asked was that they would consult us.

“We want publicity, we’re not going to speak to North Lanarkshire Council any more, we want to speak to Alex Salmond or Mike Russell, we need a Scottish Minister here. The local community is behind us a hundred per cent.”

The furious mum told how an SNP plan to save the school was rejected by the Labour run council saying: “The SNP showed the council a plan on how the school could be saved, if we had an SNP council this wouldn’t have happened.

“The Labour council told us that it didn’t matter what was said it was done and dusted, three different councillors said that before the consultation had even taken place.”

The campaigners have also been supported by independent councillor Martin McWilliam who said: “I got a call and came down, people are still disgruntled and there’s strong feeling within the community. I feel sad they lost the court judgement.”

Another campaigner Audrey McFarlane said: “I spoke to Mr McGhee from the council, he said it’s inconveniencing the children, I said don’t talk to me about inconvenience as we’ve got to send our kids to other schools, they can’t even ensure safe routes to the other schools for our kids.

“We’ve got the backing of the local community and I think they will last inside as long as it takes”.

The mum added: “If we can’t save the school from closure they should at least keep it open until the new Greenhill Primary is completed”.

SNP Minister Alex Neill has written letters to the Scottish Education Secretary Michael Russell over the council’s handling of the issue.  Mr Neil said: “I am in constant contact with the parents who are still angry over the way the council treated them and are determined to continue fighting. I will continue to support the parents in whatever way I can.”

Another SNP MSP John Wilson has also taken the parents concerns to the Education Secretary;  Mr Russell has agreed to speak with the group on condition they end their sit-in.

The council offered to pay the full costs of the court case on condition the campaigners ended their sit-in by Friday 4th, however the deadline passed and the group remained – the council have now withdrawn the offer.

Labour Councillor Jim Logue, convener of learning and leisure services, said: “It is very sad that the Coatbridge community will not be able to experience the school for a last time.

“It is not the way we would have chosen to mark the closing of Gartsherrie Primary which has had such a long and proud history.”

Councillors voted 38-20 to close the school at a fiery meeting on Thursday 25th March.  Furious Gartsherrie parents were particularly angry to hear Labour representatives Tony Clarke, William Shields and Peter Sullivan, in whose ward the school lies, vote for its closure with the rest of their party.