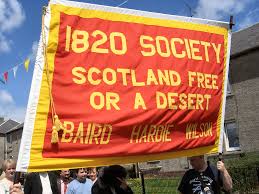 The Brexit button has been pressed. As the UK grapples with the myriad of uncertainties and risks inherent to this unprecedented ‘leap in the dark’ it is likely that its impact on Scottish hill farmers will be catastrophic.

Together with the demographic time bomb (most hill farmers are in their 60 or 70s) Brexit  may generate a veritable Tsunami which will sweep away centuries of our farming traditions and open the door to ‘rewilding’ – wolves, bears ’n all!

Scottish hill farms have long been part of our cultural and natural heritage, and have been recognised as part of the EU’s network of high nature value farming. However, I fear that Brexit will inevitably lead to large-scale abandonment of Scottish hill farms due to major reversal in the financial fortunes of the beef and sheep sectors.

Even if agricultural policy is returned to Edinburgh from Brussels via London (and that’s a big if), the removal of EU agricultural policy measures that have successfully supported nature-friendly hill farming in Scotland for decades, is likely to precipitate large-scale abandonment of hill farms and create a social, environmental and economic crisis in Scotland’s remoter areas redolent of the Highland Clearances of the 19th century.

In the 1970s, while travelling to Aberdeen, I recall an independence slogan daubed on a railway bridge near Montrose, ‘Scotland free or a Desert’.   I always assumed the desert was metaphorical rather than actual (that was before climate change was talked of), but today we may be facing, thanks to Brexit, the entirely more realistic choice ‘Scotland free or a wilderness’.

Scottish hills and uplands have always been quite evocative and special places, where nature and farming come together in a dynamic and even balanced tussle, where the fragile balance between man and nature is maintained by a harsh climate and marginal economic conditions that preclude the industrialisation of farming systems seen elsewhere in the UK.

Hill cattle and sheep are the backbone of this farming system and provide the best quality meat available today. What’s more, they also protect and enhance nature, providing nourishment and protection to many of Scotland’s most treasured landscapes and wildlife. Some like the Chough and Corncrake would have gone extinct here, as they have elsewhere in the UK, had it not been for Highland cattle and the mosaic of diverse habitats they create and maintain.

Central to the sustainability of this system have been financial payments to farmers from the EU under the Common Agricultural Policy (CAP). These payments are a lifeline that supports hill farms and the wildlife that depend on farming. The value of hill farming has long been recognised in the EU, as far back as the 1980s when the Environmentally Sensitive Areas (ESAs) scheme was introduced in 1987 to help conserve specially designated areas of the countryside where the landscape, wildlife or historical interest is of particular importance, providing financial assistance to farmers and crofters to maintain and enhance particular habitats and landscape features.

First, it is highly unlikely the deeply indebted British state could afford to provide the same level of funding to hill farming as the broad shoulders of EUs CAP.

Second, the UK government, by inclination and to a great degree forced by circumstance, will follow an increasing neo-liberal approach to agriculture. Unlike the EU that is wedded to the idea of the family farm and sustainable food production, right wing hawks in Westminster will seek to divest public funding from farming and turn over food production and farming to the multinational corporate sector to compete with countries like Argentina, Brazil and of course the USA. In those countries, intensive farming systems that suppress and destruct nature predominate and have led to massive social and environmental problems.

Parts of the UK, especially southern and Eastern England could succeed following this model, but Scotland’s hill farming sector could not.

Third, at one time the Scottish hills were important to the Tories.  As in the rest of the UK, the Scottish Tories drew strength from the rural shires of Scotland. For example, in the 1979 general election the Tories won 22 seats in Scotland, of which 13 were in strongly rural constituencies. They now hold only one. It was no coincidence that of the 10 ESAs designated in Scotland, nine had a sitting Tory MP.

With the UK government likely to be staunchly metropolitan and conservative for the foreseeable post-Brexit era, it does not require any leap of faith to conclude that Scottish hills will not be high on London’s political agenda.

Under Brexit, the final nail in the coffin of hill farming is the nascent demand for ‘wilderness’ emanating from the coffee houses and salons of metropolitan England. Over- worked and unhappy investment bankers and other denizens of leafy suburbia are smitten by the notion that the UK can be ‘rewilded’.  Of course, they are not talking about the Thames estuary – their imaginations are running wild in the Scottish Highlands, where untamed nature is supreme and wolves are unleashed once more to chase down a wild deer (or an obdurate sheep more likely), in a primordial wilderness.

The writings of the Grand Vizier of re-wilding, George Monbiot, is apparently the perfect accompaniment to the morning latte in Belgravia’s finest cafés. Beyond Monbiot’s wolves, there lies another avaricious predator anxious to grab land as hunting grounds for all kinds of prey with rewilding the perfect cover story for big money investors from the City of London and beyond. One traditional Highland estate, Alladale is currently being ‘rewilded’, and may more will undoubtedly follow.

Re-wilding may bring a few economic benefits if judiciously planned from tourism, but wilderness will generate far fewer jobs and a sense of community to the rural economy than hill farming.  Even sporting estates, the last land ownership fad to engulf the Highlands, with its absentee owners and minimal management, are better placed to maintain the rural economy than wilderness areas purposively devoid of humans.

At the heart of European farming policy is the family farm.  In an age where food has never been cheaper in real terms, financial subsidies and other development support have been essential to supporting high nature value farming.

Maintaining our place in the EU and the life support system known as the CAP, is our best option for maintaining a vibrant and resilient rural economy in our own hills. But it will not be easy. Should Scotland find a way to remain in the EU, the government in Edinburgh will need to champion the hill farming sector in Europe, and hill farmers themselves will have to find their voice in the corridors of power.  Challenges a plenty for sure, but if the only  alternative is a wilderness, then it is a challenge we must confront successfully for future generations.

Professor Douglas MacMillan has been involved in the economics of land use in Scotland and overseas for the last 30 years.  His main research focus is on remoter rural areas with special interest in community land ownership, deer management, and forestry and conservation policy. He has worked at the James  Hutton Institute and the Universities of Aberdeen and Kent.  In the 1990s he was a member of the Scottish Land Commission set up by the Scottish National Party, prior to the establishment of the Scottish Parliament.

Golden opportunity to seize Brexit agenda for the good of Scotland...