After today’s inflation report by the Bank of England we thought it would be worthwhile to explain what exactly its remit is regarding inflation and take a look at how successful it has been in recent years.

11 Objectives – In relation to monetary policy, the objectives of the Bank of England shall be – (a) to maintain price stability

(b) subject to that, to support the economic policy of Her Majesty’s Government, including its objectives for growth and employment.

12 Specifications of matters relevant to objectives

Every year around April the Government writes to the Monetary Policy Committee at the BoE to ‘specify’ what price stability means.  Alistair Darling was (just) still at the Treasury when the last letter was sent.  Read it in full here.

From the ‘Remit’ letter:

“I re-confirm the target as 2% as measured by the 12-month increase in the Consumer Price Index (CPI).”

“The Inflation target is 2% at all times”

All this seems pretty clear.  The BoE has a statutory obligation for inflation as measured by the CPI of 2% at all times.  But then comes the get out:

“the Framework [monetary policy] takes into account that any economy at some point can suffer from external events or temporary difficulties, often beyond its control.  The framework is based on the recognition that the actual inflation rate will on occasions depart from its target as a result of shocks and disturbances.  Attempts to keep inflation at the inflation target in these circumstances may cause undesirable volatility in output”

It is this line in the remit letter that the BoE uses to justify targeting inflation over the “medium term” rather than trying to achieve “2% at all times”, which is stated in the letter.  The ‘Remit Letter’ then calls for the BoE to send a letter of explanation to the treasury if inflation moves away from target by more than 1% in either direction.

The BoE then fleshes out its Inflation remit on its website:

“The MPC’s aim is to set interest rates so that inflation can be brought back to target within a reasonable time period without creating undue instability in the economy.”

It rather calls into question why have a target at all if the BoE can simply sight “external events” or “temporary difficulties” that allows it be at a rate higher than the government mandates, without attempting to bring inflation back in check.  The BoE has also made up the “reasonable time period” bit, begging the question how long is reasonable, 1, 3, 7 years?

Since 2007 there have been 10 letters that the BoE has had to write a letter to the BoE to explain why it has missed its target, here we present all the letters and the excuses given for the miss.

Compare what they say to what actually happened in the chart:

“part of the rise reflects an unexpectedly sharp increase in the domestic energy prices during the second half of the year … Part reflects a rise in food prices caused by weather induced global reduction in supply.  But taken together those factors account for only around half the pick up in CPI inflation over the past year.”

In a few months time the CPI had risen to 3.3% rather than “fall back within a matter of months”.

“That rise can be accounted for by the large and, until recently, unanticipated increase  in the price of food, fuel, gas and electricity”

The bank then tries to say “well if you think it’s bad here, look at Europe and the US”:

“the global nature of these price increase is evident in inflation rates not only in the UK but overseas … In May HICP inflation in the euro area was 3.7% and the US CPI inflation was 4.2%”

“There are good reasons [like a global depression starting in a few months?] to expect the period of above target inflation we are experiencing now to be temporary.”

“There has been sharp, largely unanticipated [really – didn’t you mention this in your last letter, how is it still “unexpected”?] increase in the price of energy and food, reflecting development in the global balance of demand and supply for these commodities.

“The MPC expects inflation to fall sharply in 2009 and to fall back to target thereafter.”

More great predictions by the BoE, expecting CPI to be both above target and falling sharply.  Translation: “ we haven’t got a clue”.

“The sharp movement in CPI back towards target that has occurred over the past two months is likely to continue in the coming months … but the effect on the UK consumer prices of decreases in world prices has been dampened by the depreciation of sterling – since my December letter the sterling exchange rate has depreciated by about 5%, bringing the total depreciation to 28% since the summer of 2007…”

“The rise in 2008 was associated with development in commodity prices particularly those of food and energy.

“Since my December letter, the sterling effective exchange rate has depreciated by about 5%, bringing the total depreciation to 28% since the summer of 2007.”

Again, no explaining what has caused this depreciation in sterling – maybe just maybe it was caused by all that money printing?

We believe that the sharp decline in CPI inflation since its peak in September is likely to resume in the coming months.

“The outlook for global activity will constrain UK demand prospects and, as a result, the margin of spare capacity is likely to build in the coming quarters, pulling down on CPI inflation.  Consistent with that outlook, wage pressures are muted.”

“It is likely that over the next year CPI inflation will move below target, although the profile of inflation could be volatile, reflecting the reversal of the temporary change in VAT on CPI inflation”

“In the medium term, inflation is determined by the balance of money spending and the supply capacity in the economy.  Money spending, in turn, is influenced by monetary policy, allowing the MPC to meet the inflation target.”

“But in the short run, other factors, which cannot immediately be offset by monetary policy, can cause measured inflation to move around”

“the Committee expects this to be a temporary deviation of inflation from the target, as was made clear in last week’s Inflation Report”

“The direct effect of the short-run factors on inflation should be only temporary.  Thereafter, inflation will be determined by the growth rate of nominal spending relative to the supply capacity of the economy.”

“The MPC’s latest projections, published last week in the February Inflation Report, suggest that, although it is likely to remain high over the next few months, inflation is more likely than not to fall back to the target in the second half of this year”

“The MPC’s assessment is that [the] rise is largely accounted for by three factors: first, the impact of higher oil prices, which on average in April were nearly 80% higher than at the beginning of 2009, pushing up on petrol price inflation.

“Second, the restoration at the beginning of January of the standard rate of VAT and third the continuing effects on inflation of the sharp depreciation of sterling in 2007-8”

“The change in VAT and higher petrol prices will continue to be reflected in the overall price level. But, unless they increase further, that should affect the twelve-month CPI measure of inflation for no more than a year”

“Moreover, the continuing impact of the past depreciation of sterling is still pushing up on consumer prices, but likewise the effects on inflation can be expected to wane over time. As this happens, the MPC expects that inflation will fall back”

“Money growth and nominal spending growth show signs of recovering, at least in part as a result of the Bank’s asset purchases. Output growth has also picked up and the projections outlined in the May Inflation Report show that its pace is likely to increase. The May projections also suggest that, absent further price level surprises, it is likely that inflation will fall back to target within a year.”

“Inflation has been volatile over the past two years or so. In that time, it has moved above 5%, then fallen to 1.1 %, risen again to 3.7%, and has since started to fall back once more. But on average over that period, inflation has been above the target. And the recent strength of inflation has surprised the MPC.”

“The MPC is very conscious of the risks to the outlook. On the downside, there is a risk that growth could be weaker than the Committee expects. As a result the substantial and persistent margin of spare capacity could exert greater than expected downward pressure on inflation. But on the upside, if the current period of above-target inflation were to become engrained in inflation expectations and this affected wages and prices, it would be costly to bring inflation back down again”

“As I described in my August letter, the MPC’s assessment is that the current elevated rate of inflation largely reflects a number of temporary influences, including the restoration of the standard rate of VAT to 17.5% in January, past rises in oil prices and the continued pass through of higher import prices following the depreciation of sterling since mid-2007”

“As a result, CPI inflation is expected to remain above target, and at a somewhat higher level than expected three months ago, for a period of a year or so”

“As the temporary effects of VAT increases and higher import prices dissipate, inflation is expected to fall back towards the target”

“As I have described in previous open letters, three factors can account for the current high level of inflation: the rise in VAT relative to a year ago, the continuing consequences of the fall in sterling in late 2007 and 2008, and recent increases in commodity prices, particularly energy prices.  Although one cannot be sure, prices excluding the effects of these factors would probably have increased at a rate well below the 2% inflation target”

“There is a great deal of uncertainty about the medium-term outlook for inflation.  And I do not wish to conceal that there are real differences of view within the Committee reflecting different judgements about the risks to that outlook”

“Inflation is likely to continue to pick up to somewhere between 4% and 5% over the next few months, appreciably higher than when I last wrote to you.  That primarily reflects further pass through from recent increases in world commodity and energy prices.  The MPC’s-central judgement, under the assumption that Bank Rate increases in line with market expectations, remains that, as the temporary effects of the factors listed above wane, inflation will fall back so that it is about as likely to be above the target as below it two to three years ahead”

A popular excuse about why we’re having inflation is rising energy prices and a depreciating pound – not once do the BoE mention that this depreciation just might be caused by their ultra-loose monetary policy.  Perhaps we’ll leave you with this chart pulled together by James Turk over at Goldmoney which highlights beautifully just where the real source of all inflation comes from – money printing.

Thomas Paterson is the Chief Economist at Gold Made Simple, one of the worlds leading gold bullion services. He is head of editorial and research. Tom previously worked as a Broker on a Futures and Options desk at a main brokerage in Canary Wharf and was responsible for the production of “The Economissed” , a research paper tracking Macro themes and trade ideas. Tom is a keen student of the Austrian School of Economics – or as he refers to it ‘real’ economics – and feels very passionate about the lessons that can be gained by all that understand its guiding principals. 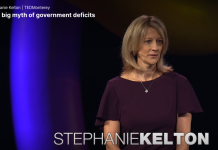 The big myth of government deficits

Here’s a secret: ALL the oil is running out

“The public are so out of touch with today’s politicians,” Jim...