There’s a point in every storyline when your suspicions are confirmed. The plot twist may seem entirely improbable but you can’t shake that feeling in your gut. You go from: I think that’s it, to: My God. I was right.

Usually that’s followed by incredulity. How did they get away with that…

For the last year and a half the case for the Union has had the same wobbly foundation. In fact it’s taken its cue more from Midsomer Murders than The Night Manager. One, if you’ve ever watched, is am dram for telly, poorly acted, totally implausible and devoid of theatrical tension. The other, whatever your take on the concept, is the opposite – tight, tense, expensively designed and with a plot that gnaws at the edges of your suspicions. You wonder if this could almost be real.

In Scotland the Holyrood opposition is political am-dram. High calibre statecraft, it ain’t.

Labour were the de facto upholders of the UK because they carried so much popular support, a Hercules labouring under the weight on his shoulders. They swayed voters in their droves because if Labour believed in it, it had to be for the good. Right? Many of the same voters realised years ago they had deep suspicions of a system that foisted Tory governments on them every 10 or 15 years and there were more Tory years than Labour. Social advances were reversed and it was a two steps forward, three back. Still, if a humble voter could see that surely all the big brains in Labour could too. And they were sticking with it, laughing at the SNP meantime for pretending to have an alternative.

But sometimes it’s the captain on the bridge that is last to see encroaching disaster. If complacency or stupidity takes hold he can look down the wrong end of the telescope and spy only insignificant troubles on the horizon. He may even be aiming the glass in the opposite direction. Whatever the explanation, Labour didn’t see the iceberg ahead and, like Titanic, is beyond redemption – too far from help to save much more than the women and children and a few stragglers. The great liner that carried so many hopes is going down.

(I imagine a decades-long resurrection project with academics seeking artefacts from the submerged vessel and possibly a film, Labour: The Movie. There will be tours of Glasgow. ‘This whole city was once run by them – with council, Holyrood, Westminster and European representation. The City Chambers here was their stronghold. Now there’s three of them left’).

I say this because I can think of no Labour figure, indeed no figure in Scottish politics from any party, whom I fear. By fear I mean an opponent with the ability to reach out, to wound, to make you rethink your position, one who just might be changing the views of the electorate. And who, given time, can turn the tide of opinion.

I’m reluctant to say so because it sounds complacent and that’s not a clever place to be. I held back until near the end on Jim Murphy because he carried the air of the big beast from London that has traditionally seduced the journalists. But mainly because I couldn’t believe Labour could fall any further. A revival of some kind must be imminent, I thought. Like Labour’s 2010 General Election campaign when Murphy was Secretary of State charged with winning back or retaining all of Labour seats won in 2005. He did.

I had hopes for Alex Rowley, believing him to be an authentic working class voice from a previous admired Labour age who could add bottom to Kezia’s wide-eyed enthusiasm. He disappeared without trace and has now broken his promise about not standing on the list. I doubt if one in ten voters could name Kezia’s deputy.

What does leadership contender Neil Findlay do? Isn’t he supposed to be Jeremy’s man in Scotland making challenging speeches on a radical left theme and raising the red flag as both a rallying call for voters and a veiled threat to Kezia to get on board, or something like that.

Who are the MSPs? With the lack of members and quality at Westminster isn’t there a need for a commensurate upturn in Holyrood activity? Where are experienced old hands like Patricia Ferguson and Dave Stewart? Or Lewis Macdonald and Ken McIntosh? Where’s the new talent…wasn’t Drew Smith supposed to be a rising star? Or by election winner Cara Hilton. Does Jenny Mara still have a role? Who is Margaret McCulloch? Who’s John Pentland?

And behind it all is the grim Buddha, Blair McDougall, the Better Together failure.

Worse than Labour’s dire straits are the voices of the Union, the shrill and weirdly disconnected media voices which strain to turn every decision into a weapon, often in direct contradiction of the polling evidence. One of the mysteries of the modern debate is how the BBC fails to unearth writers to interview who actually support (broadly) the governing party. Little as I listen, when I do switch on I hear identifiably Unionist journalists from UK-supporting outlets like the Times, the Herald or, God help us, the Daily Mail. They are ‘countered’ by writers from the alternative media most of whom support the Greens or RISE. It is an extraordinary conundrum in a country that the party with the massive popular support carries on rising regardless of an antipathetic and sometimes biased media offering.

In a way the BBC is reflecting the media accurately. There really aren’t journalists currently in newspapers in Scotland who don’t have an axe to grind against the ruling party at election time. The newspapers just don’t hire people in that mould and are instead fully equipped with well-drilled anti-SNP propagandists. By that I don’t mean lending deep scrutiny to policy or politicians’ behaviour which is the journalists’ role. There are some real signs of this now coming from the new media. From the decaying print industry we get only the sham and the shameless.

Witness the ream of vitriol that flowed from, among others, the Herald during the TinthePark debacle. A relentless flow of innuendo and opposition quotes couched in the language of corruption and sleaze. The clear suggestion we were invited to entertain was that a former SNP staffer and elicited a bung of public money from her Nationalist mate at the ministry for a company that didn’t need it. 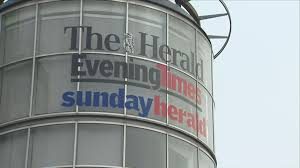 The only ‘evidence’ was the woman involved had indeed worked for the party and – smelling salts, please – was partner to an SNP MP. That she might be earning a living doing something different which involved approaching politicians was discounted despite the creation of a veritable industry of such people facilitating and lobbying…of all parties. And indeed she had contacted MSPs of all parties, a fact mysteriously missing from some of the Herald’s one-sided coverage.

The woman, Jennifer Dempsie, had in fact only arranged for a meeting between her boss at TinthePark and the minister and didn’t even attend. The grant was the result of the meeting. It was paid to cover the cost of relocating the event.

When last week the minister involved, Fiona Hyslop, was ‘cleared’ of any wrong-doing because there was none, one simple story appeared in the Herald reporting, in effect, that their relentless pursuit of a questionable story without factual foundation, had been exposed as shoddy, low grade character assassination.

Some tweeted that Hyslop deserved an apology from the editor. The apology is surely due to Dempsie whose attempts at an alternative career were put under public scrutiny, so turning off prospective employers and, more damaging, persuaded her to avoid a career in politics when she was nominated for a place on the Highlands and Islands list. The overblown, under-researched scuttlebutt repeated with such glee by a former leading newspaper is one reason why it is in serious decline. Congratulations are due to the editor for chasing a talented young female away from our politics…(the same editor who sacked a talented young female journalist for disagreeing with him). Much of the rest seems to be composed of a kind of Bullingdon Club of self-congratulatory commentators with Twitter links to Joanne Rowling.

And where are the sane voices of the Union among the citizenry? My Twitter timeline has very few of those. Instead it has rabid and often disturbingly unhinged outpourings from leading Unionists like Tom Gallagher and Ian Smart, both obsessed with Nazis. Phrases like ‘you spit on working people’ and ein volk, ein reich are their stock-in-trade. The impression they give is of bitter, self-obsessed, irrational curmudgeons failing to deal with defeat and feeling instead the resentment at their humiliation. What kind of contributors to a new country would such people have made had we won the referendum? And when I get disagreement with my tweets, the ubiquitous Rangers references are prominent. Is that what Unionism has become. A throwback to the fifties?

All this – the implosion of effective political opposition, the collapse of Establishment media credibility and the fear and loathing of Unionist voices – combine in a lurid blaze of failure. One can only assume that the future of the Union remains in the hands of the silent constituency who know this but are untouched by it, whose rejection of independence is as concrete as it is unspoken. It may not be articulated but is none the less real for that, a spasm of defiance at a world they see changing before them but which they refuse to acknowledge. Like Labour, they live in denial. But they cannot stop the inevitable.

What stories do Scots tell about our history, and our very...