The machine, designed and constructed by Pelamis, is capable of generating 750kW of renewable energy and will be installed and tested at the European Marine Energy Centre (EMEC) in Orkney.

The installation at EMEC will be the first time that the P2 machine has been tested anywhere in the world and also represents the UK’s first commercial supply contract within the marine energy sector. 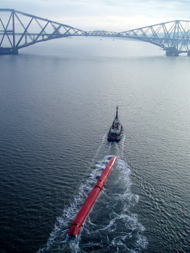 The device is 180 metres long – or as long as the Gherkin building in London is tall – and weighs approximately 1,500 tonnes.

At the launch ceremony at Leith in Edinburgh, First Minister Alex Salmond said:
“Scotland is well-placed to become the clean, green energy powerhouse of Europe, with as much as 10 per cent of its wave power potential, as well as an estimated one quarter of the continent’s offshore wind and tidal energy capacity.

“Today is another significant step in that journey. It is also testament to E.ON’s strong global commitment to renewable energy generation and to the ambition and innovation of Pelamis in pioneering its internationally-renowned wave energy technology.

“I’m delighted that the completed P2 wave energy converter is now ready for deployment at the European Marine Energy Centre and pleased to officially name the device Vagr Atferd.”

Dr Paul Golby, Chief Executive of E.ON UK, said:
“We’re delighted to be a part of such an innovative project. The event marks a milestone in marine technology and the next exciting step for renewable energy in the UK.

“It’s essential that we continue to invest in new technologies, like the Vagr Atferd, to harness the power of nature and to accelerate our transition to a low carbon economy.

“Today’s launch is a celebration of the successes we’ve seen with renewables and a clear example of the changing shape of the UK energy industry – there is a real potential for the UK to lead the marine energy sector.”

The machine was named by Matthew Rendall of Stromness Primary School in Orkney, following a competition. Matthew and his family joined the First Minister at the port to launch the device.