The SNP is poised for a historic second term as the latest opinion poll shows Labour would be behind the Nationalists in terms of seats won to parliament. The survey of 1000 Scots, conducted by Panelbase between 24th and 29th March, shows that while both parties are neck and neck on the constituency vote the SNP has opened up a significant lead in the regional list vote.

The net effect of the poll would see a significant swing towards pro-independence parties (SNP & Green) in Holyrood which would add pressure to demands for a democratic referendum on the issue. Translated into parliamentary seats the new parliament would take the following shape: SNP 54 (+7) , Lab 52 (+6), Con 12 (-5) LD 8 (-8), Gn 3 (+1).

Voters who are as yet undecided will clearly have a large impact on the election and these voters tend to be swayed by the issue of who would best lead the nation. Crucially, the poll shows that SNP leader Alex Salmond is way out in the lead in terms of recognition throughout Scotland and just as important in terms of voter satisfaction. That aside, it is a major concern for Labour that their leader scores less than the Conservatives’ Annabel Goldie. In terms of recognition the leaders scored: Alex Salmond 85%, Annabel Goldie 39%, Iain Gray 27%, Tavish Scott 19% and in voter satisfaction: Alex Salmond + 18, Iain Gray -16, Tavish Scott -25, Annabel Goldie -17

Worryingly for Labour’s Holyrood group leader Iain Gray, the poll confirms the recent trend of the SNP closing what was until recently a huge Labour lead of 15%. With the campaign shining a light on opposition parties’ agendas for government, Labour’s campaign seems to have caved in under pressure.

Last week Labour MPs in Westminster were heavily criticising Iain Gray’s perfomance as leader. Gray was no doubt still smarting from the general view of observers who heavily criticised his television performance on STV’s leaders’ debate. These events have unfolded against a background of division within the party’s Holyrood leadership with former leader Wendy Alexander refusing to endorse her own party.

However, Labour’s campaign threatens to unravel completely after it emerged that their draft manifesto was uncosted and needed to be entirely rewritten, followed by a serious of hastily executed policy U-turns which turned out to be uncosted too. As the campaign intensifies and the party’s leadership, organisation and policies come under intense scrutiny, it is becoming clear that Gray will struggle to gain any initiative against his popular and better-known SNP opponent.

While Labour’s shapeless and rudderless campaign heads into the rapids, the SNP has a raft of popular and costed promises to present as well as a record of delivery in Government on such popular policies as abolishing prescription charges, freezing the council tax and putting 1000 more policemen on the beat.

John Curtice, professor of politics at Strathclyde University, said the poll underlined the fundamental weakness of Labour’s campaign as “the lack of a personality capable of reaching out to voters”.

He added: “Iain Gray is little known and not much liked, even amongst those who actually voted for the party last time.”

For the SNP Nicola Sturgeon was delighted with the poll finding and clear about why Labour’s lead had evaporated. She said: “Labour’s unremitting negativity is coming unstuck as their leadership north and south of the border turns voters off and the Lib Dems are paying the price for abandoning fairness in their rush to sign up with the Tories.” 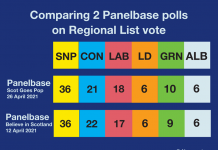 Scotland’s election, the future of the Union and Ed Miliband’s Labour