It is the second international heritage destination to be recorded as part of the Scottish Government’s pioneering project the Scottish Ten, run by Historic Scotland and Glasgow School of Art’s Digital Design Studio.

During the meeting at which business and education links between the two countries were discussed, the First Minister also presented the Indian Prime Minister with two gifts: a print of India selected from the Scottish National Archives and a copy of Adam Smith’s book The Wealth of Nations to mark the fact that Dr Singh won the prestigious Adam Smith Prize in 1956 when he was studying at Cambridge University. 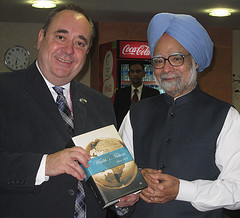 Images of the historic site, known as the Queen’s Stepwell and located in the town of Patan on the left bank of the Saraswati River, will be recorded using laser technology. Believed to date back to 1050, the well is made up of stepped terraces descending into the ground, adorned with around 400 sculptures representing a range of Hindu themes.

The footage will be used to create exact digital models that will aid in conserving and maintaining these areas of historical importance. Education and tourism programmes can then allow access around the site across the globe using virtual reconstruction.

Rani Ki Vav has only been fully excavated in the last 50 years and is currently on the UNESCO tentative list to be considered for World Heritage Site status.

It has not previously been digitally documented and is considered to be at risk from erosion and decay.

“Rani Ki Vav is a truly spectacular site and I am very proud that Scotland is able to provide the expertise to ensure that its full breathtaking beauty is captured in its entirety and conserved for future generations.

“Scotland is a world leader in the use of digital documentation technology. The Scottish Ten is working capture some the world’s most important heritage sites and I am delighted to announce that Rani Ki Vav will be part of this innovative project.

“The experience gained by the Scottish team recording two of our UNESCO World Heritage sites, Rosslyn Chapel and Mount Rushmore, will prove invaluable when capturing the intricate carved detail of the magnificent sculptures at Rani Ki Vav.

“A key part of this pioneering project will be working with the Archaeological Survey of India to share knowledge and enhance our expertise in this field. I would like to thank them and for being our partners is this exiting, important project, to preserve some of the wonders of the world forever.”

The Scottish Ten project was announced by the Culture Minister Michael Russell on July 4, 2009, at Mount Rushmore. New Lanark and The Heart of Neolithic Orkney have already been scanned, as has Mount Rushmore in South Dakota. The other Scottish World Heritage Sites to be scanned are the Antonine Wall, The Old and New Towns of Edinburgh and St Kilda.

The images created will be shared with the American not-for-profit organisation Cyark, founded by Ben Kacyra, inventor of the laser scanner. It is collecting the data from 500 world heritage landmarks to hold in a global archive.

Historic Scotland is an executive agency of the Scottish Government charged with safeguarding the nation’s historic environment. The agency is fully accountable to Scottish Ministers and through them to the Scottish Parliament.