A letter sent to the heads of planning across Scotland urging them to be realistic about the level of affordable housing in new developments ignores the needs of people who are homeless or at risk of becoming homeless, according to housing leaders in Scotland.

Chief Planning Officer James McKinnon wrote to the heads of all planning authorities on the 15 March asking them to be ‘realistic’ about the percentage of affordable housing agreed in new developments.

The Scottish Government announced this month that it is asking the housing sector to save between £26 million and £42 million a year and that social housing grant would fall from £66,500 per unit to £40,000.

Under Scottish Planning Policy the quota for the number of affordable homes built as part of new developments is 25%.  That figure is not mandatory and local authorities can negotiate the percentage based on ‘level of need’ in accordance with their affordable housing, economic and planning policies.

Now fresh concerns have been raised that moves to stimulate new developments will be at the expense of social housing and mid-market rents as planners look for ways to remove the financial constraints often associated with building affordable housing.

Housing and homelessness charity Shelter and the Scottish Federation of Housing Associations, the national representative body for Housing Associations and Co-operatives, has warned that any moves to relax the conditions of the current quota depreciates the priority of affordable housing in Scotland.

Graeme Brown, Director of Shelter Scotland said: “We understand that developers are struggling but our concern is that once building starts up again, the percentage of affordable housing won’t go back up and there is a chronic lack of supply of social housing in Scotland.  This is the wrong way to go about stimulating development.”

“We need to remember priority in terms of need for people in temporary accommodation and on waiting lists.  That number will only increase repossessions are set to go up in the next two years and people run out of options.”

“MSPs say the biggest issue in their post bags is housing.  Yet in only features in public policy debate when the question is raised about whether house prices are rising or falling.  That’s a dangerous position to be in given the current gap between the have and have not’s.”

There are 250,000 households on the country’s council and housing association waiting lists.  As Local Authorities work towards the 2012 target to abolish priority need, the number of households accepted as homeless or potentially homeless is rising.

According to the Scottish Government housing statistics for Scotland all 32 of Scotland’s Local Authorities have a shortage of affordable housing.  A recent report showed there had been a 160 per cent increase in the number of people in temporary accommodation since 2002, a rise from 4,153 to 10,815, as councils try to hit the 2012 target to abolish ‘priority’ need.

Concerns about the letter were backed by the SFHA who said the decision could reduce availability at a time when demand is increasing. Mary Taylor, Chief executive of the Scottish Federation of Housing Associations said: “It is in every local authority’s interest to ensure supply of affordable housing. With 250,000 Scottish households on waiting lists, there is an urgent need for the Scottish Government and local authorities to work together to prioritise the provision of affordable housing.

“This is all the more worrying as housing associations and co-operatives are facing cuts to capital investment on new house building which are putting many projects at risk.  Any moves which restrict provision of affordable housing should be of concern to us all. More homes are needed urgently for the next generation.”

A spokesman from the Scottish Government said: “The letter does not signal a change in policy.  The Scottish Planning Policy states that the development plan may seek 25% of the total number of housing units within new housing developments to be affordable, where this is justified by a housing need and demand assessment.  But if evidence points to a different figure, then the 25% does not apply.”

A letter sent to the heads of planning across Scotland urging them to be realistic about the level of affordable housing in new developments ignores the needs of people who are homeless or at risk of becoming homeless, according to housing leaders in Scotland.” 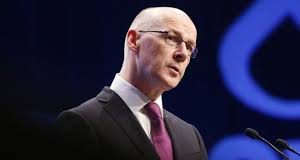 Is there a freeze on asking Labour any council tax policy...