The transatlantic circus that began with media innuendo and half truths descended into farce yesterday as a US senate committee lost all credibility by refusing to seek testimony from ‘deal in the desert’ PM Tony Blair.

The transatlantic circus that began with media innuendo and half truths descended into farce yesterday as a US senate committee lost all credibility by refusing to seek testimony from ‘deal in the desert’ PM Tony Blair.

A spokesman for the hearing explained to the international media that the invitation had been drafted in error. The high profile hearing set up to look into the secret trade deals and agreements involving BP, the UK government and Libya, didn’t want to hear from the man who was at its epicentre.

As waves of antagonism wash over Kenny MacAskill from ill informed US figures, politically motivated Scottish opposition politicians and the usual media figures, one can only wonder how the families of the victims feel as hopes they have built that a serious investigation might ensue are dashed on the rocks of misinformation and political opportunism.

The memories of their loved ones have been traduced by this circus, a circus that has at its heart the circulation of innuendo and half truths.

The attack by the British ambassador on those same media reports (He described them as “untrue” and said they “troubled” him) has still to be reported in newspapers and by the BBC. It was these reports that led to the drafting of the original letter by the four senators and ultimately to this shambolic circus.

The UK media are implicated in this whole sorry episode through their regular circulation of misinformation over the Megrahi release and their continual conflation of the deal in the desert with the release. Indeed barely weeks after the dying Megrahi returned to Libya BBC Scotland were already running both separate stories side by side.

The misinformation eventually made it across the pond and four senators, looking to increase their profile as the US mid-term elections approached, decided to make hay. The godsend in the form of BP’s disastrous handling of the Gulf oil leak and their involvement in Blair’s deals with Gadaffi was icing on a very unpalatable cake, the ingredients of which originated here.

So it is a more than a tad ironic that some newspapers and media commentators are today attacking what they call US ‘hypocrisy’ over the American handling of the issue. Indeed the innuendo is still going on now with the prominent Conservative figure Paul Macbride QC actually questioning, on Radio Scotland, whether Al-Megrahi really does have terminal cancer – truly plumbing the depths.

We have also witnessed the spectacle of a British Prime Minister trashing Scotland’s reputation on the international stage. David Cameron, caught like a rabbit in the headlights, first flip-flopped over whether to meet the four senators then backtracked on his own previous demands for an inquiry into the last Labour government’s deal in the desert. Mr Cameron seemed more eager to defend BP and the Labour party than to represent one of the constituent members of the UK – Scotland.

David Miliband was another who decided that last year’s principles, when he didn’t want Megrahi to die in a Scottish jail, were now out of fashion. The Labour leader in waiting quickly jettisoned them as he joined Cameron in order to put the boot into Scotland.

However the Scottish government remained resolute in the face of these hypocritical and cowardly attacks and called the bluff of their attackers by demanding a full inquiry into Lockerbie and publication of all documents. As the truth began to emerge amidst calls for full disclosure, the focus and heat slowly turned towards Westminster over the deal in the desert.

Both the USA and the UK government’s had a lot to hide with regards to Megrahi; the Scottish government had made it clear that the only documents not yet published were those denied publication by those same UK and US administrations. Pressure was building for a full inquiry into Lockerbie; the law of unintended consequences had kicked in and a diversion was needed, and needed fast.

Then the senate hearing threw a lifeline to this new US/Labour/Tory coalition in the shape of senate ‘invitations’. International conventions were ignored as Scottish Ministers were invited to attend the modern day equivalent of the Salem Witch Trials.

In Scotland The Herald, Record and the Scotsman informed readers that the SNP Ministers had ‘snubbed’ the senate hearing and that there was ‘fury’ and ‘anger’ at their decision to decline the invites. The BBC language was originally less sensational but has now adopted a similar tome with its ‘Kenny MacAskill rejects Lockerbie plea’ headline.  What is clear is that the deal in the desert story is now being dropped.

Strangely, these media outlets seemed much more relaxed about the bizarre decision by the US committee not to invite the man who was key to the whole oil deal scandal, Tony Blair. Indeed the story about the original draft letter inviting Blair, that had been widely reported in the international media, wasn’t apparently deemed that important in Scotland.

Out of the woodwork, arm in arm with the Scottish Tory leader Annabelle Goldie, emerged Labour MSP Richard Baker. The Holyrood Unionists had been conspicuously silent on the matter, perhaps memories of their behaviour last year when they completely misjudged, along with the BBC, the mood of the nation had made them more circumspect. It was clear though that this saga was not playing out well for Labour and the Tories, and ‘angry’ and ‘accusatory’ quotes regarding the senate invites were required.

Baker and Goldie, the new ‘little and large’ of Holyrood, obliged with quotes that duly appeared in predictably sensational headlined articles.

However Baker decided that an 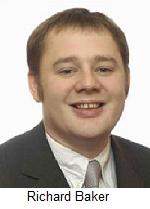 appearance on Radio Scotland would add weight to his printed words. His subsequent interview by Gary Robertson on Good Morning Scotland will go down as a comedic tour de force as Mr Baker contradicted himself time and again and destroyed his own arguments with such ease that Robertson need not even have been there.

Baker argued that MacAskill should go to the hearing, but Jack Straw should not. That the release of Megrahi on compassionate grounds was a mistake but the PTA agreed by Blair on the back of oil deals was acceptable.

The most hilarious part of the interview came when Baker complained about media conflation of the prisoner transfer agreement with the release of Mr Megrahi…… in the US!!. Where had Baker been this last 11 months when the ‘mischievous mix-up’ was regularly doing the rounds over here? Could it be that the sustained US coverage meant that the truth had finally caught up with Labour and the Scots public were beginning to see through this media chicanery?

In the same programme (2 hrs 10 minutes in) the SNP’s Christine Grahame responds to Richard Baker’s remarks and makes the point about Tony Blair.  Note how Gary Robertson steadfastly refuses to acknowledge this and other very pertinent points made by Ms Grahame.

So, news manipulation and political manoeuvring continues as demands for a full inquiry into Lockerbie are stymied once again and the families of the victims are treated as mere pawns in the slimy game of oil.

However, as the combined forces of Washington and London have been brought to bear on the government of this small nation the opponents of the SNP are once again caught out of step.  Scots have responded to the dignified stance of the SNP by standing four-square behind them.

The events have also witnessed something no-one predicted, Scotland’s First Minister Alex Salmond standing head and shoulders above the Prime Minister of the UK and more incredibly, President Obama himself.

BBC Scotland presenters are fond of asking if this has harmed Scotland.  The answer is that Scotland has emerged stronger from this Washington/London storm than when it entered, a storm that would have seen lesser nations wilt.

The stronger the wind blew, the more resolute we became and the more dignified our flag appeared – it was never limp.