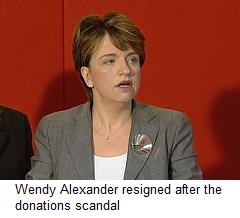 A member of the public has claimed that a Labour party official in Scotland has been contacting Scottish newspaper journalists in an attempt to smear him after he instigated a Freedom of Information (FoI) request relating to the Wendy Alexander illegal donations scandal.

The man, David Ferguson, has alleged that a senior Scottish Labour official who is also an aide to one of Scotland’s most senior Labour MPs, sent an email to several Scottish newspaper journalists containing allegations about him that were untrue.

The email describes Mr Ferguson as being a “hard-core cybernat” and accuses him of lying about his political leanings to a Herald journalist.  The email also contains insinuations from another Scottish Labour MP that the FoI request is part of an SNP orchestrated ‘black ops’ campaign.

The email contains references to comments that Mr Ferguson allegedly made on online sites.  Mr Ferguson has acknowledged some of the comments are indeed his, however the email attributes comments to Mr Ferguson that he did not make.

More worryingly, and perhaps more shockingly, the author of the email supplied details of a Facebook site apparently belonging to Mr Ferguson, together with a list of his friends –  the only problem was that this is a different Mr Ferguson.  This mistaken identity was apparently caused by the other Mr Ferguson having linked to a site that called for Alex Salmond to be included in the leaders debate.

The email was sent out on or around the 31st July 2010, just after articles appeared in the Scottish press covering Mr Ferguson’s FoI request.  The ‘smear campaign’ was halted abruptly when Mr Ferguson became aware of the email after a journalist inadvertently let slip its contents to him.  Mr Ferguson immediately challenged the falsehoods and was also able to point out the identity blunder.

Speaking to Newsnet Scotland Mr Ferguson claimed that the incident has caused himself and his wife considerable stress.  He felt sufficiently intimidated that he decided to abandon his plan to call Wendy Alexander as a witness at his FoI Appeal hearing.  His wife, who is Chinese, asked him to drop the FoI case.

Mr Ferguson said: “As far as the Freedom of Information case is concerned, I consider myself to be an ordinary person pursuing a legitimate concern through the appropriate legal channels. I have no affiliation to any political organisation whatsoever, and I’ve never at any time sought to make this a party political matter. I struggle to understand why they seem to think that this makes me fair game for one of their smear campaigns.”

His own words
Tomorrow Newsnet Scotland will publish an account of the incident in Mr Ferguson’s own words.  In it he will name the person who sent out the email together with the name of the Scottish Labour MP quoted in the email and the identity of the very senior Scottish Labour MP for whom the author of the email is an official aide.

‘Wendygate’
Wendy Alexander was forced to resign as Holyrood Labour leader in 2008 after leaks thought to have emanated from within her own Labour party revealed an illegal donation had been made to her leadership campaign.

It emerged she had accepted an illegal £950 campaign donation from Jersey-based businessman Paul Green, and that this donation had then been falsely attributed to a Glasgow company, Combined Property Services.  The law strictly forbids the acceptance of political donations from people who do not reside in the UK, and a conviction for attempting to conceal the receipt of an illegal donation carries a five-year ban from serving in any elected office.

However, despite the law being broken no prosecution followed.  The Electoral Commission refused to reveal its reasons for not pursuing the Labour MSP and also refused to divulge explanations given by Alexander and her team for the false attribution of the illegal donation.

Mr Ferguson has fought for over two years in an attempt to force the commission to reveal the information under Freedom of Information laws and is now awaiting the decision of an Appeal hearing that took place earlier this month.

Mr Ferguson originally appealed to the office of the UK Information Commissioner (ICO).  The ICO criticised the Electoral Commission on matters of procedure and found in Mr Ferguson’s favour under Freedom of Information Law, but crucially failed to uphold the appeal on the basis that the testimony, freely given by Alexander and her team, was subject to data protection laws.  Mr Ferguson then took his case to an Appeal Tribunal presided over by a High Court judge.

Newsnet Scotland understands that the High Court has just ruled in favour of Wendy Alexander and the Electoral Commission.  Newsnet Scotland will have a detailed explanation of the verdict and our take on it some time later this evening.

A provoked response to Ian Davidson’s remarks about the Referendum