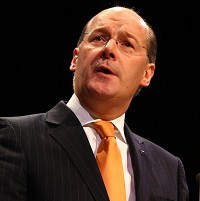 By Alex Porter and Dave Taylor

Without the powers of economic independence which the SNP government would dearly love to have, Scotland has no choice but to send the surplus in its national accounts to London and after that endure a £1.3 billion cut in its grant from Westminster to pay for Britain’s escalating budget deficits.

The Scottish government’s budget was always going to be a delicate balancing act. As a minority government the SNP Finance Minister John Swinney had to negotiate with his cabinet colleagues, deliver on his party’s election pledges, achieve a majority vote in Parliament for his budget and keep local government on board with the party’s policy of a Scotland-wide freeze in the council tax.

Set against a backdrop of severe cuts to the Scottish block grant from Westminster, getting a successful budget passed through the Scottish parliament in the final year of the first ever SNP government’s term in office will be a real test of John Swinney’s mettle. It seems that Scotland’s Finance Minister has, against considerable odds, delivered with authority for both his party and the nation.

Throughout the SNP government’s tenure the Labour Party’s strategy has been to portray the SNP government as a failure. To this end the Labour Party have often appeared as an irresponsible opposition by putting their partisan party interests above the interests of the nation. Last week was a case in point when Labour voted down world-class legislation which was minimum pricing of alcohol.

Undermining the SNP’s manifesto pledges has been Labour’s strategy in presenting their adversary’s term in office as one of failure and so attacking the SNP’s policy of freezing the unpopular council tax has become a fixation for the party.

Local Government
One of John Swinney’s first successes as Finance Minister was his concordat with Scotland’s local government councils. In return for agreeing a council tax freeze local councils gained in terms of central government finance and having more freedom over their spending powers. Much of this was achieved with the agreement of the President of COSLA, Labour’s Pat Watters.

This entente cordiale has recently come under threat because of cuts to the Scottish block grant, much of which would have to be passed on to local government. The leader of Labour’s Holyrood group Iain Gray, sensing the demise of an SNP manifesto pledge, came out against continuing the council tax freeze arguing that a rise in the tax take would help offset the cuts.

Labour’s local government leaders led the charge, insisting that they would resist a freeze, and were backed by Labour’s trade-union partners. This opposition suffered a blow however when an opinion poll showed that the council tax freeze was a very popular policy with the Scottish electorate. Iain Gray wobbled, leaving Pat Watters’ negotiating position with Swinney weakened.

Watters indicated that a freeze would be achievable if certain concessions were made by Swinney. First of all Watters forwarded the case that £70 million of extra cash from the government was insufficient – Labour councils are free to raise their council tax but they’d lose that government money if they did. The choice now is to take the Westminster cut of 6.4 per cent and raise council tax to pay for services or keep the freeze and accept a 2.4 per cent cut. Watters turned up to Swinney’s party.

Another condition of accepting the freeze was that the SNP government set a three year budget, however Swinney has remained firm on this by setting a traditional one year budget, which has been accepted.

Some small concessions were made by Swinney in terms of the flexibility councils have with spending and £70 million was allocated  within  Nicola Sturgeon’s health budget to a “Change Fund”.  This fund is accessible by local authorities to redesign services thus, easing the pressure on acute hospital provision.

Ultimately, Swinney had the stronger hand. Watters’ negotiating position wasn’t helped by Iain Gray’s volte face and the SNP will get to keep their manifesto pledge of a council tax freeze going into the Holyrood elections on May 7 next year.

Public Sector Reform
A critical aspect of the budget is the establishment of the Commission on the Future Delivery of Public Services, chaired by Campbell Christie which will be a comprehensive review of Scotland’s entire public sector. After generations of Labour control over a public sector created by successive UK Governments on the basis of models developed for England, many will see a process of renaissance as long overdue.

As John Swinney pointed out to Andy Kerr, allocating detailed future budgets to sectors, which might undergo radical change, simply puts obstacles in the way of public sector reform. Naturally, parties who would prefer to see the status quo or yet more ad hoc adjustments would much prefer that these obstacles remain in place.

This is a bold call by the SNP. A balanced budget for 2011-12, together with a drive to restructure Scotland’s public sector to create a modern, efficient Scotland. Regardless of the election results in May, there would be a Spending Review next Autumn for the longer term. The choice would be between an SNP led Government planning for a long term future, or a Labour led Government planning to regain their control over the institutions of the country.

It would indeed be a question of “party over nation”.

Draft Budget 2011-12
Westminster’s cuts are savage. On top of the 3% “efficiency savings” that Westminster has assumed in allocating budgets, there is the continuing reduction in the Barnett formula – in every financial review, even less of Scotland’s money comes back to us.

The SNP propose protecting the NHS Budget, but that has consequences elsewhere. After taking the Westminster “hit” of 3% efficiency savings, other budgets have further reductions –

If we let them.

Lamont invite to London is a reward for Scottish Labour’s Cuts...