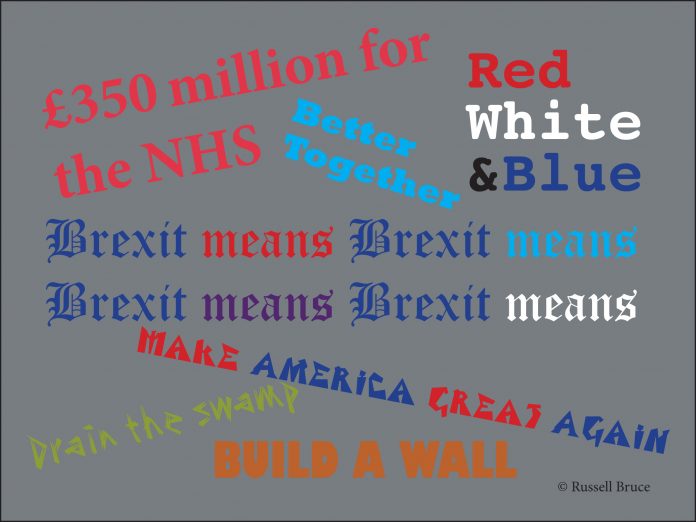 Unfortunately, they seem to work. Trump won the White House- much to his surprise and horror, according to Fire and Fury, Michael Wolff’s compelling account of The Donald’s first year in office. A half-cut Nigel Farage looked equally nonplussed when he realised that the people had bought his ‘bring back control’ rhetoric.

The British establishment’s mix of project fear and the vow saw Scotland become the first country in history to vote against itself. There is maybe a lesson to be learned here. Ours was the moral victory, for sure, but theirs was the actual victory. Perhaps next time we don’t need to bother with an exhaustive 612 page paper. As Ronald Reagan once said – if you’re explaining, you’re losing. Perhaps next time we just write it in big bold letters- on the side of a muckle big bus.

Templepatrick, Ballyclare this week during a trip, necessitated by my imminent

purchase of an agricultural feed supply company. It was February 14th – Valentines Day – and I was the single guy sitting quietly in the corner, planning farmer meetings while everyone else was feeling the love. I think it’s called Living the Dream.

I finished a lovely meal and retired to the bar, whereupon I watched the news reports of Boris Johnson’s Valentines Day Brexit speech. Now, that cheered me up, not least because it was an object lesson in the limits of rhetoric. Theresa May’s catastrophic decision to hold a snap election suddenly saw her subjected to a level of scrutiny that showed her considerably less than strong and a million miles from stable.

Ruth Davidson’s cuddly persona was outed by her failure to deal with racism and sectarianism within her own party. And now Boris’s bumbling, eccentric, posh boy, I’m-nice-but-dim schtick was shown up for the con-job it always was.

The great sportswriter Hugh McIlvanney tells the story of an old trainer whose boxer was worried about his next opponent, a blowhard who was telling everyone that he was going to knock him down in the first round; he was going to put his lights out; that he was the greatest of all times.

“Just put a pair of gloves on him”, said the wisened old coach. “That normally does the trick”.

Wednesday was the day when Boris put the gloves on. If you can bear it, here’s an extract from the press conference I watched with my head in my hands. Frankly, the loving couples next door didn’t know how lucky they were. 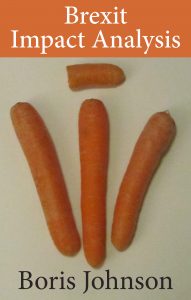 Journalist: Foreign Secretary, what do you say to those people who say ‘yet another speech on Brexit – but where is the clarity?’

BJ: Clarity! OK. God. Carrot. Carrot. Well, as I say, I think you have an abundance of clarity in the PM’s Lancaster speech… What I’m trying to address is the feeling that I pick up talking to people that they’re not getting the message, the positive agenda – I think there is a great positive agenda and we need to get out there and explain it. And it can be good for carrots too, by the way.

Alright, you didn’t actually mention carrots, but we can take back control of our agricultural policies and it may be that we can do wonderful things with, you know, our own regulations to, you know…..promote organic carrots.

It was an unmitigated disaster, neatly summed up by Tommy Sheppard: “Sending Boris to appeal to Remain voters is like sending an arsonist to put out a fire.” Others have been less charitable. The New Statesman recently described Boris as “a liar, a charlatan and a narcissist”. “Facts”, said Robert Burns, “are chiels that winna ding”.

Frankly, it’s appalling. I grew up under a Thatcher Government that was a shower of B’Stards. But they were, at the very least, competent and ruthless B’Stards. They didn’t pretend to be anything else. This current crop can’t even claim to be this. You couldn’t make this up.

Today, Theresa May warned the EU “not to put ideology before citizens”. Jings. Does she understand what comes out of her mouth? Has she heard of irony? Is it oblivious self-contradiction, or is it sheer malignant dishonesty?

Boris talked about increased sales of prosecco and Italian cars post-Brexit, which

will be great news for the austerity hit folk of Stranraer as they decide which Maserati they want to buy this spring.

When asked if EU nationals would get preferential access post-Brexit – That’s under discussion, Boris said. It had better be. While the Tories mumble about securing a seasonal pass for EU workers, some of the big fruit and veg companies are relocating away from Scotland. The dairy sector needs EU workers every day of the year. Which is why Scotland needs to be in control of its immigration policy and why we must be independent as soon as possible.

What Boris’s speech revealed is that Brexit is all about isolation, xenophobia, and anti-consensus. This is the petrol that fuels Brexiteers and the mindset that repels Remainers, why the UK is now an irrelevant country that everybody hates and why Scotland will, very soon, regain its independence.

Having spent a lot of time in England recently, I’ve become convinced that much of England is completely indifferent to reports of financial meltdown. I’m convinced that if there were a vote today, the result would be broadly similar. The vote for independence would, however, be very different. I find myself, for once, disagreeing with Pete Wishart MP, who says that timing is everything.

It isn’t. When the Edinburgh Agreement was signed in 2012, support for independence stood at 27%. With eleven days to go, it was at 52%. We lost the vote but won the argument. So I don’t believe we have to wait for the “right” poll before starting the campaign. Either independence is a good idea or it isn’t. Incidentally, David Cameron called a EU referendum precisely because he was well ahead.

Alec Ross is chair of Farmers for Yes. A version of this article was previously published in The Orkney News

Older people lose faith in politicians and newspapers over the referendum