More than five hundred people have been injured after a meteor exploded in the atmosphere over the Russian city of Chelyabinsk.

People watched in amazement as a giant fireball streaked across the sky before exploding, leaving windows smashed and fiery debris strewn across the region.  Fragments landed in a nearby lake and also in the West Siberia region.

Most people are reported to have suffered only minor injuries, but there are reports of some more serious injuries with people hospitalised.

The display happened at just after 09:20 am local time and panic ensued when several explosions were heard along with a bright flash.  Some people believed they were witnessing a plane crash.

The Russian Academy of Sciences estimated that the meteorite weighed about 10 tons and entered the Earth’s atmosphere at a speed of at least 33,000 mph, shattering about 30-50km (18-32 miles) above ground.

Reports claim that Russian officials say they had already found the main chunk of the meteorite which had fallen on the outskirts the city.

Speaking to Russian news agency Pravda, Maxim Shingarkin, deputy chairman of the Duma Committee on Natural Resources, Environment and Ecology said that the meteor was likely a satellite of the asteroid 2012 DA14, which is now flying in the vicinity of the orbit of Earth.

However, according to NASA scientists: “The trajectory of the Russian meteorite was significantly different than the trajectory of the asteroid 2012 DA14, making it a completely unrelated object.  Information is still being collected about the Russian meteorite and analysis is preliminary at this point.  In videos of the meteor, it is seen to pass from left to right in front of the rising sun, which means it was traveling from north to south.  Asteroid DA14’s trajectory is in the opposite direction, from south to north.”

Shingarkin compared the phenomenon in the Chelyabinsk region with the Tunguska meteorite of 1908, which also exploded above Russia:

“The most significant manifestation of this kind of celestial objects that has ever been observed by man, was the fall of the so-called Tunguska meteorite.  However, even after his fall of such a large object, there were no fragments of the meteorite found on the ground because it actually was not solid.

“It was a concentration of gas and ice-like substances that exploded in Earth’s atmosphere. However, the destruction of that meteorite produced a strong blast wave.  The phenomenon that we could observe in Chelyabinsk this morning was similar, although it was of a much smaller scale.” 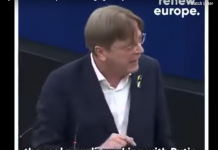 Ukrainians are fighting for the survival of their country and that...