Who shot JFK? It may be one of the enduring mysteries but at least there are theories as to the culprit. Which is more than can be said for the other unanswered question of our times: what is the Union good for?

So dense is the mystery that even its most ardent supporters are forced to appeal to the greatest minds to seek solutions. What can we come up with that will make an emotional case for the United Kingdom, they ask. Whose name can we stick on a 1000-word essay and make it look credible? Someone. Somewhere. Must have. Something to say. No?

The creation of a propaganda mini factory unit called These Islands is the clearest reminder of how intellectually bankrupt is the case for the UK in the modern era. They are reduced to force-feeding desperation into the machine and hoping for something coherent to be produced.

It recalls 2007 and the 300th anniversary of the Union when Gordon Brown put on his Stalin scowl and pretended it wasn’t happening to avoid the embarrassment of the Nationalists winning control of the Edinburgh government. If the Union meant anything it surely required celebration by the Unionist government of the day – still running Scotland three centuries later. Thanks were due to Queen Anne – and her spies and corrupters – for creating the Glorious Country in which it is our honour to live. Instead there was apologetic coughing and we all quickly moved along.

If there was an obvious reason for Union it would not require the saying – by definition, we would all know the truth without contrived arguments and PR campaigns.

These Islands, like other astro turf outfits such as No Borders before it, is the living proof that there is a black hole at the heart of Unionism and no one knows how to fill it. No matter how many voices you call in and no matter how many letters they have after their name, the fundamental point remains – you are begging as many people as possible to dream up some justification. How do you make the case for arguing there is no essential differences between Scotland and England and therefore an overwhelming English majority should be empowered to control Scottish affairs?

The first voice to be revealed is that of Anglo Scot Nigel Biggar, a man whose stated views would form a template for Richard Wilson in One Foot in the Grave. As an Oxford don, he is practiced in the arts of presenting a case in classic academic format so it reads like a reflective thesis. Examine the content though and what is revealed are the predictable tropes of old school Unionism including the threat of violent insurrection by Nationalists. I mean, you can never rule it out, can you? And why would you, if, like the regius professor, you believe in the justified war and the use of torture. Oh, and would you believe it? – he supports nuclear deterrence.

He is an apologist for the racist behaviour of Cecil Rhodes in Africa. He justifies the invasion of Iraq and British military intervention in general. He’s an Anglican priest so he thinks those suffering in agony should not be helped to die. To be fair to Nigel, he isn’t totally against abortion so there’s a strain of liberalism in there.

There is also a strong strand of wishful thinking, oddly from a man paid to confront moral dilemmas head on. In the spirit of debate I include a link to his article.

In the first paragraph he concedes it was dismaying how bankrupt was the Unionist case in 2014 (see above) but ascribes this, not to the lack of intellectual weight, but to our acceptance of the fundamental goodness of the Union being so blindingly obvious that no one has to articulate it. (Seriously)

He then outlines the main three reason for backing the Union – prepare to be surprised. ‘The greater external security of liberal democracy, a depth of multinational solidarity of which the European Union can still only dream, and the upholding of a humane international order. And all of that will remain true, whether or not Brexit comes to pass.’

It may be his theological background but it seems Nigel lives on a different plane. The UK’s claim to upholding liberal democracy stands up to scrutiny if contrasted with North Korea – with Scandinavia, not so much. Liberal democracies tend not to have massive unelected legislatures filled with party hacks and compliant goons – except the Chinese National Congress. They also tend to have representative voting systems – Westminster has no such thing.

Liberal democracies don’t casually hold referendums on matters of national interest without a fact-based campaign to inform the public and then (ironically for These Islands) treat with contempt the different votes in other nations. Nor, I suggest, do they wilfully keep from the people the content of damning reports on the effects of policy. I’m not sure what’s liberal about refusing to take in orphaned refugees or sending ‘home’ people who’ve made their lives here. Maybe Nigel will explain in a further essay from the godfront.

On which point, he really doesn’t make the case for Britain’s multinational solidarity when that’s the very issue that caused the Brexit debacle. He may be missing the news down there in Oxford but it is xenophobia and Little England voices that are shrilly calling us out of the EU where, whatever it’s difficulties on the policy front, they are at least holding to free movement irrespective of country of origin. He might want to examine Germany’s open doors to a million refugees. And isn’t it Scotland that is upholding the open doors policy in the UK and offering hope to EU citizens while welcoming all comers as Scots after independence?

The third prong of his trident is the usual right wing nuttery about wee Britain punching its weight through the UN and nuclear weapons and the failed neo liberal institutions like the G7. The old guard of Ukania can’t stand the idea of losing a Security Council seat if Scotland goes. They prefer the feeling of superiority privileged club membership brings and, despite the teachings of Christ, have a natural tendency to condescend to developing countries.

Anyway, read it yourself. That’s what it’s for. And make up your own mind.

There is nothing here about the dignity of people who feel connected to a Scottish identity seeking to fulfil the United Nations’ right of self-determination. And, worse, he makes the ‘emotional case’ sound fusty, hard-line, conservative, unyielding and institutional. He may inadvertantly be doing us a favour. That would be ironic – perhaps that’s Nigel’s real schtick.

But, to be honest, it would be a disappointment if this was the best the multitude of British Nationalists signed up can do. I’m tired and bored with the only case for the UK being one of fear. It is entirely based on threats of doom and warnings of everything always being worse under independence and it’s becoming increasingly hard to maintain when just about every argument is mirrored daily in the Brexit fiasco – isolation, no trade deals, international laughing stock, companies leaving, devalued currency, economic decline, terrorism.

Even if it is backed by hardliners, there has to be hope that among the brains they can find one argument that sounds modern, optimistic, liberal and inclusive – one that recognises and respects our differences and doesn’t pretend it’s all working fine if we’d just shut up. I welcome the idea of a forum for a positive debate but misrepresenting the present, as Biggar does by projecting what he’d like it to be, will do nothing except please the core vote.

And therein lies a problem for These Islands. If you produce a long list of the brainy and celebrated as your supporters, you really have to turn out the right quality of work – if you fall short, you are seen to fail. I mean, if all those bright types agree with you, why can’t they make the case? People will suspect there isn’t a case to be made.

And the truth is that an advisory body of this size will never meet, hardly any will ever communicate with each other – they’ll just individually pop some words in the post when they’re not doing work they’re actually paid for. (Which may explain why the guts of Nigel’s article first appeared in a letter he wrote to an Irish paper in 2014)

I foresee another danger, one that overtook the Better Together gang. This looks like a group of mostly outsiders pontificating from afar on the state of Scotland. Almost exclusively they will be middle class ‘experts’ like Nigel unwittingly talking down to Scots while having no actual experience of living here. Anecdotally, it was exactly this ‘We Know Best’ outpouring articulated by posh accents telling us what we couldn’t do and shouldn’t be allowed to do, that so infuriated some natural No voters that they turned into Yessers. There is a hidden danger in Professors and Dames writing patronising guff and then being questioned about it on television. You can almost see the eyes of the viewers’ narrowing. That right, aye?

These Islands may yet prove to be a bounty for the Yes campaign – at least it’s offering something beyond the sterile poverty argument that gets more threadbare by the day. (£30b worse after Brexit? Nae bother)

And who knows, maybe we’ll be honoured by a rational, even-handed assessment from advisory board member Brian Wilson.

By the way, I know who shot JFK. I haven’t time today but… 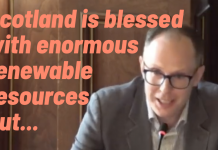 Indyref2 must not be put off by freak waves of the...