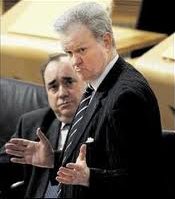 Mr Stevenson, who was hounded by the Scottish media following the chaos that early snowfalls brought to Scotland’s transport network, submitted his resignation to First Minister Alex Salmond.

In his resignation letter Mr Stevenson said: “Although we put in place significant efforts to tackle the event, I feel that I could have done much more to ensure that members of the public who were caught up in a difficult and frightening set of circumstances were better informed of the situation.

“I deeply regret that and for that reason I feel I should step down.”

Accepting his letter of resignation with “great regret”, Mr Salmond said: “I understand your reasons for resigning but frankly I think it is wrong that you should have faced this situation.

“You have worked to ensure the preparedness of our transport network for winter weather.

“These plans have generally proved effective but on Monday we were faced by an unprecedented challenge.

“There were indeed problems with communication with those suffering extreme difficulty, but just as no man can tether time nor tide, sometimes the elements are beyond anyone’s control.

“I warmly thank you for all that you have done in serving this first SNP Government.”

Although Mr Stevenson received the critical information about the extreme weather forecast from the Met Office later than opposition parties claimed, Scotland’s media continued to direct blame at Mr Stevenson’s response for the havoc caused by last week’s snowfall when hundreds of motorists were caught on gridlocked roads and motorways. Many cars were abandoned and many motorists were stuck in their cars overnight.

Activist resigns from Labour after party tries to claim credit for...