Is a hard Brexit unravelling? Mrs May’s speeches at her party conference certainly are. Six years at the Home Office left her ill-prepared for premiership: She shows no grasp of basic economics, international relations or how markets work.

With a degree in geography she should have some knowledge of the world. Her pre-political career began with six years at the Bank of England followed by 12 as a financial consultant and senior adviser in international affairs at the Association of Payment Clearing Services. So why did she ignore what these years must have taught her to rely on sound bites and jingoism?

The online dictionary defines jingoism as “extreme patriotism, esp. in the form of aggressive or warlike foreign policy.” That hits the mark for the tone that May set for a conference on which the eyes and ears of the world were focussed on – especially financial markets in the wake of the Leave vote.

The sharp fall in the value of sterling on 24rd June was an instant reaction to an event that changed the UK’s position in the world, with uncertainty in continuing momentum. Sterling lost 15 per cent of its value and with it the value of all assets denominated in sterling. May’s speeches last week wrought further havoc, as currency markets started to eye parity with the Euro and even the possibility of parity with the US dollar. What a slap in the face for Sterling to lose so much against the Euro, a currency we are constantly told has inherent structural flaws.

No currency is without some disadvantage to poorer performing countries or regions. The Euro is no exception but it has global strength due to the size of the Eurozone economy and the Euro’s weighting in IMF Special Drawing Rights (SDRs) at 31% against Sterling at 8% – a 4 to 1 ratio. SDRs are a form of reserve currency and likely to be of growing importance as the dollar wanes as the default international currency.

On a recent news programme Iain Duncan Smith, now consigned to the backbenches, tried to divert attention by pointing out that currencies fluctuate on a constant basis. True, but the big moves are the result of big events and perceived damage – like the UK leaving the gold standard in 1931, the 1949 devaluation, leaving the European Exchange Rate mechanism (ERM) in 1990 and the Leave vote result in the early morning of 24th June.

Duncan Smith also claimed the rise in the stock market indicated that everything was hunky-dory and demonstrated faith in UK plc. This is also to ignore reality. Investors are buying UK listed companies whose earnings come from overseas. Those earnings when converted from dollars or euros buy more pounds than was the case before the UK voted for Brexit and before Mrs May opened her mouth.

The share price of miners and oil companies, who report and earn in dollars, rose because it costs more to buy these shares in pounds than it did before each tumble in the value of Sterling.

Investors like a bargain and overseas investors see opportunity to buy UK shares on the cheap. Expect to see an increase in overseas takeovers of UK companies as they move to pick off UK companies in bargain basement territory.

The stock market rise looks less impressive with a great deal of activity from UK investors effectively selling the pound and overseas investors bargain hunting. In dollar terms the FTSE 100 is only 90% of the value it was before sterling started to dive.

The problem for Sterling is perceived continuing weakness with May’s government doing nothing to halt the free-fall. The Financial Times is reporting that the pound is on a 168-year low against the dollar. A trend long established.

Long, long ago when Britain was a global power a dollar was five shillings or 25p, now it is 80p and we have not seen the end of the current trend when nobody is any the wiser on May’s exit strategy, or indeed if there is one, hearing instead outpourings of confusing and unrealistic positions on why the EU must deliver on Brexiteer terms.

The winners are the wealthy who can shift their wealth to wherever produces the best return and provides a safer haven. The Brexiteers have difficulty getting their heads round why the free movement of labour and capital within the EU is non-negotiable. Capital always finds a means of getting where it wants to be. Free movement of labour helps level the playing field.

The losers are the people on low and even those on above average incomes, pensioners, students, young people, those about to retire and those on zero hour contracts. In other words, pretty well all of us. Imported food and clothing will cost more, fuel prices are rising with another 4p a litre expected soon.

The hospitality trade will benefit from more overseas visitors but lose out on regular spend from the home market as belts tighten. Scotland welcomed record numbers of international visitors in the second quarter of 2016 spending £540 million in the 3 months to June. European visitors accounted for more than half at £276 million. The tourism sector employs 217,000. Continuing visa free travel within the EU, as a member state, is vital for this and every other business sector. Exports to the European Union by Scotland’s food and drink sector were worth over £724 million in 2015

Exports traditionally became more competitive when sterling lost value. Times have changed and goods have shrunk as a share of UK GDP from 36% in 1948 to 10% today. Manufacturers today are dependent on importing parts – 40% for the car industry – but with Brexit no automatic tariff free entry into Europe, as is the case at present. The UK no longer has the machine shops to act as local suppliers.

We are all citizens of the world whether Theresa May recognises that of not. We are affected by what happens elsewhere and the prognosis is not good. Frankfurt, Paris and Dublin are lining up to grab a share of the UK’s financial sector. The US Federal Reserve minutes for September have just been released and the vote was close, so the odds of a rate rise in December have increased. The dollar will increase in value if the Fed raises rates and the pound will take another beating. Some analysts are predicting another 30 per cent fall in the value of Sterling when Article 50 is triggered in early 2017. Say goodbye to holidays in Europe, already getting more expensive by the day.

Scotland could be a winner. Our export record is better than England’s but we have to retain our membership of the EU. Europe seems willing to accommodate us in a change from the question marks suggested in 2014. Crossing out UK and substituting Scotland in the present Treaty could deliver a quick safe passage and quite possibly the opt-outs and rebate for the early years of Scotland’s membership.

Many in Europe have had enough of the “half in, half out” years of Britain’s membership, Now that the UK is firmly on the way out such a simple, early deal for Scotland as continuing member number 28, would not be without appeal to Europeans.

Another silver lining, and one you will not find mention of in the mainstream media, is the benefit from the current fall in Sterling for North Sea oil and gas. Having worked through a painful period of cost reduction, with costs paid in pounds, North Sea output gains as the price is realised in dollars.

Then there is our own financial centre. Bankers remain unpopular in the public mind but there is more to the financial sector than the banks.

Scotland’s financial sector employs 85,400 people, contributing  £7 billion to GDP. Adding related professional services brings total employment dependent on the financial sector to 156,700. With strong connections to the financial sectors elsewhere, a cost base 25 – 50 per cent lower than London, Paris or Frankfurt, opportunities for Scotland are there for the taking if we remain in the EU able to provide “passporting” rights, lost to London.

Winnie Ewing famously said when elected for Hamilton in November 1967, “stop the world, Scotland wants to get on”. That ambition has not changed, and 49 years later we are closer to achieving our goal. England, it seems, wants to stop the world so it can get off. And today we learn Nicola Sturgeon has a plan to keep Scotland in the EU. Never doubted it. 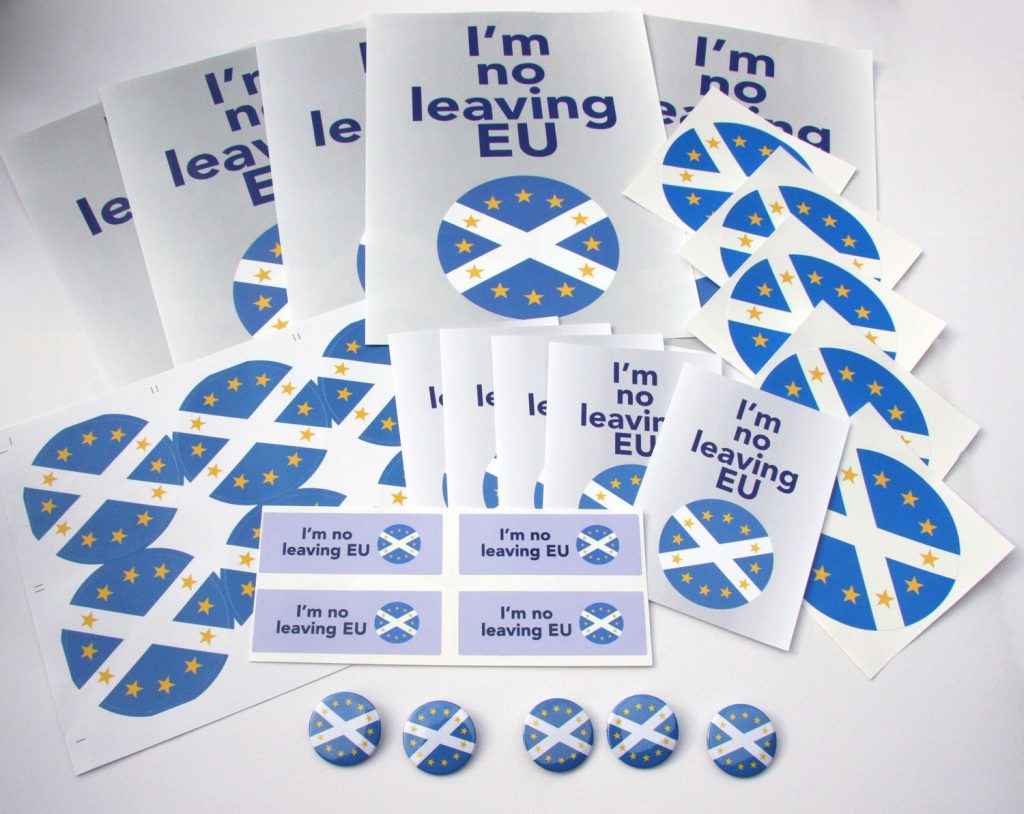 “I’m no leaving you campaign” material designed by the writer who describes himself as a Scottish, European and a World citizen. In a collaboration with material from the National Yes Registry campaign, an activists pack of campaign materials is available from http://www.ayemail.scot/store/?model_number=EU-ACT

There are Tories around these southern parts, so I am ‘both... 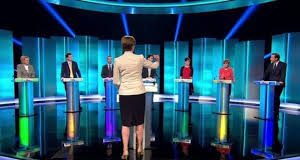 Seven-headed debate reveals the power of women in modern politics