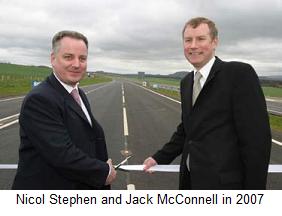 Former leader of the Lib Dems in Scotland Nicol Stephen has admitted to being surprised at becoming the latest Scottish politician to be handed a seat in the House of Lords.

Mr Stephen was among 54 new lords announced yesterday by number 10 Downing Street, 15 of whom are Lib Dem politicians.

Mr Stephen becomes the latest member of the Holyrood parliament to join the unelected chamber that allows members to claim £10,000s in untaxed expenses.   He joins Labour MSP Jack McConnell who also recently became a peer and both join Labour MSP George Foulkes and Mr Stephen’s former Lib Dem boss Jim Wallace. The SNP refuse to sit in the House of Lords.

Mr Stephen said: “It came as quite a surprise to be asked by Nick Clegg to join the House of Lords. It is obviously a very considerable honour.

“It is also a great opportunity to continue to be involved in politics and carry on fighting for the interests of Aberdeen and the North East.”

Nicol Stephen was a former deputy to Jack McConnell when the latter was First Minister, Mr McConnell lost out to Alex Salmond in May 2007.  The former Scottish Lib Dem leader, who was once described as “lazy” by a Labour coalition colleague, is probably best remembered for having claimed he ‘smelled sleaze’ over Donald Trump’s planning application for a golf course, the remarks led to weeks of media attacks on SNP leader Alex Salmond and Holyrood officials.  However a Holyrood inquiry found no evidence of any ministerial wrongdoing.

Nicol Stephen stepped down as leader of the Scottish Lib Dems in 2008 and was replaced by Tavish Scott.

Group spokesman Peter Facey said: “People who make and amend our laws should be elected by the public.”

Jack McConnell Laughing all the way to the Lords