The Boy Who Cried Wolf

Professor Tom Gallagher works in the Department of Peace and Ethnic Conflict at the University of Bradford. When he deliberates on the issue of racism in Scotland it is our duty and responsibility to listen to his views and examine our collective conscience on the matter.

It is crucial that figures such as Professor Gallagher command authority and respect on this issue. Our nation needs such wise counsel in order that those who have suffered racism feel their dignity and rights are protected. Scotland’s international reputation also depends on it having an informed and mature national dialogue on the subject.

When Professor Gallagher describes a Scottish Government Minister’s policy as “nothing less than racist” it raises real fears of racial persecution. If an individual is being racist it is cause for concern but if it is government policy a nation is in real trouble and the alarm bells start ringing. Such a nation could expect sanction and ultimately expulsion from the European Union if its government is so overtly racist.

In a single letter, in a single paragraph to The Scotsman Gallagher has implied that Education Secretary Mike Russell (born in Kent, England) is racist and the BBC of being complicit:

“One test of the BBC’s editorial values will be the extent to which it gives a voice to those who think that education minister Michael Russell’s decision to single out English students for a massive financial levy is nothing less than racist.”

If a government and a state broadcaster are accused by an eminent academic of raising the spectre of systemic racism then the European Union and indeed the United Nations would be remiss in not investigating the matter.

Gallagher was very clear about how Mike Russell’s legislation should be characterised: “Indeed, it was exactly this kind of thing that regimes hostile to particular ethnic and religious minorities got up to between the two world wars.”

The implications are clear, Professor Gallagher is equating the German Nazi “regime” with the SNP government. Mike Russell’s policy initiative which imposes tuition fees on English students who wish to enter Scottish universities is similar to the type of Nazi Party policies which, as we well know, ended up in the holocaust and the global conflagration that lead to the deaths of tens of millions of people in the second-world war. That’s what we’re being told to conclude.

Upon examination Mike Russell’s policy was seen for what it was. A reasonable policy, in keeping with tradition but with an unfortunate anomaly caused by asymmetrical devolution. It is a welcome relief that Gallagher himself ackowledged this in a subsequent letter to The Scotsman: “On closer inspection, I freely admit that the weight of evidence does not support my claim (Letters, 18 December) that the planned imposition of much higher tuition fees on English students is ethnic targeting.“

Am I missing something here? An eminent academic has compared the Scottish government to Nazis and accused a government minister of implementing the kind of policies which lead to genocide and at the same time the BBC of capitulating. The best case scenario here is that Gallagher had a rush of blood to the head and so when he realised he was wrong, should he not have issued a sincere apology so that the nation could move on?

No, no apology and his retraction was qualified: “I am glad to find myself in the wrong on this occasion..”

The words “On this occasion” are clearly meant to exonerate himself. You see, the gravity of the matter stands because the SNP typically does conduct itself in such a manner that it should rightfully be equated with nazism. “On this occasion” means that set against this context we all relate to a minor mistake which is all too understandable and forgivable. “On this occasion” the SNP were caught out not behaving like nazis for once and all reasonable people will conclude that that’s not Professor Gallagher’s fault.

One could be forgiven for wondering if Tom Gallagher had some kind of agenda. He has.

Tom Gallagher is the author of a book called: ‘The Illusion of Freedom: Scotland Under Nationalism’. Tom needs little encouragement and has attacked Salmond before in an article, written by Ron Brown of The Herald, with the title: “Salmond accused of tapping dark side of nationalism” where he is quoted as saying: “The SNP chief sometimes finds it difficult to resist the emotional forms of mass manipulation associated with Europe in uglier times.”

There is no doubt that racism exists in Scotland and should not be tolerated. A major impediment to rooting out this despicable and dangerous form of intolerance though is a stong tendency towards false and inflated charges of racism such as Tom Gallagher’s. His insincere retraction and lack of apology reveals some attitudes which we must observe closely.

Firstly, in this case, he is not entirely motivated by preventing the consequences of racism – he has done nothing but harm. More importantly though his ‘retraction’ serves to reveal an insecurity in British political culture.

The political class and the media have spun out of control. Manipulating perceptions has been a persistant aspect of British political culture – Orwell was a product of it after all. However, Britain now faces a crisis economically, politically and socially. Fraud, corruption and media manipulation are now endemic. Perceptions are now all that matter. Honour and honesty are no longer supportable.

It is deeply regrettable that many in Scotland bandy about the word ‘racist’ like confetti. It is a particular habit of the left in Scotland. Not just on the unionist side of the fence but irritatingly, the independence leaning left are often culpable too, demonstrating a problematical insecurity. Accusations of racism should be rigorously evidence-based and not merely an impulse of self-rightious demagogues. This tendency causes hurt in those accused and demeans the cause as well as the victims of racism.

For generations now the SNP have been accused of anti-Englishness. Like all political parties extremists will manage to obtain party membership but the SNP have taken strong measures to deal with the matter. It has shown its internationalist credentials not just by successfully engaging with Scotland’s Asian population, encouraging English membership through the SNP’s ‘New Scots for Independence’ group but in opposing Dungavel detentions, extraordinary rendition flights and crucially by opposing the UK’s involvement in illegal and imperialistic wars and nuclear weapons. 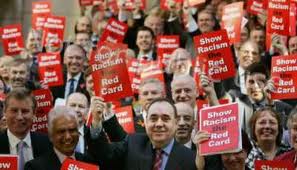 In modern Britain the SNP government have become an exception – it acts responsibly and in the interests of the people it is elected to SERVE. That is what is at stake at the Holyrood elections in May.

Accusations of racism have a powerful viral effect. Many English people actually believe that many Scots only want independence because Scots hate them. This fear affects the brand of the Scottish independence movement. People naturally don’t want to be associated with a party which is intolerant towards Scotland’s nearest neighbour where many Scots have family and friends. There is therefore a motive for unionist parties to stoke up this racial fear and tension – party advantage.

Unfortunately the case for retaining the union is almost always about being against independence. And so the case for independence is to be seen in a dim light casting scary shadows – Wee Willie Winkie for adults. Seperatists want to ‘break up’ the ‘United Kingdom’ and ‘divorce’ are demons sent to place doubt in the minds of Scots. If the Scottish electorate does not understand that independence is an extremist’s agenda it must be made to.

Accusations of ‘racism’ do the same job as Labour’s David Cairns demonstrated when he labelled those who support the SNP as “swivel-eyed, bigoted, anti-English lunatics”. If you vote for independence you are anti-English is the inference. Again the SNP are extremists. We are led to believe that the unionist parties by contrast are moderate and inclusive – yet the net result of these inferences of racial prejudice about the independence movement are that of actually frightening potential victims.

The only conclusion we can reasonably take out of all this is that unionism is comfortable with aggravating racial fear and tension because the political advantage is the only thing that matters to them. Otherwise, where are the leaders with calm heads who immediately dampen down such base propaganda? We have to assume that unionism’s leaders are deliberately silent because they quietly approve.

Consider the negative stereotypes perpetuated by union supporters about Scotland. Scots are characterised not only as racist but as too small, stupid and poor to govern their own nation. They are tight-fisted, benefit-leeching, subsidy junkies dependent upon handouts from our English cousins. That is a dominant image of Scotland as presented to the English. It is an image which rightfully angers Scots and causes resentment in a nation which currently sacrifices the surplus in its national account for the common UK good.

This stereotype has been deliberately reinforced by Scottish unionist parties and over a period of generations. Government statistics have been deliberately massaged to misrepresent Scotland’s contribution to and take from the UK treasury. Take the example of Scottish Labour MPs cheering upon the news that a Scottish bank had been sold.

The stereotype of the parasitic Scot is an image born out of Scottish unionism and its attempts at manipulating the ‘perceptions’ which Scots have about their own country. The lesson Scots are supposed to take from these relentless national briefings is that their nation has no viability as an independent state in the international arena. Enquiring minds will have noticed BBC Scotland’s comprehensive analysis of the Irish bailouts. Coverage of foreign affairs is unusual on BBC Scotland and so the intensity of the coverage in the case of Ireland was a curiosity. The subtext was that Scotland could expect the same from statehood – soveriegn bankruptcy and international humiliation.

Scottish Unionism has become almost entirely about media manipulation. Scotland is being carpet-bombed with anti-SNP propaganda. The media witch-hunt of Stewart Stevenson was just another example of it. The appointment of Tom Connor as editor of the BBC Scotland website comes as no surprise. Tom was previously censured by the BBC for offering media training to Labour party candidates.

Will the Real Scottish Unionists Please Stand Up?

At Newsnet Scotland we believe that unionism is a legitimate political aspiration. We will provide a platform for any articulate, evidenced-based and well-argued defence of maintaining the union and indeed we now reiterate our invitation to submit to us such-like contributions for publication.

If unionism is confident in its politics let it eschew these underhanded tactics. Scotland deserves better than the petty and dangerous false accusations of racism which mars public debate and alienates citizens. The nation deserves better than being bombarded with images of itself as incapable.

The SNP is to be commended for the determined efforts it has made in terms of its civic nationalism. It is now time for Labour and the other unionist parties to stop the chicanery and rise to the occasion. The political spoils should not go to those who connive to undermine confidence and harmony. Scotland’s next step on its long journey should be the result of an honest appraisal of the best case that both sides of the debate can make.

Only then will there be a settled will of the Scottish people.

Would an independent Scotland have a viable economy?