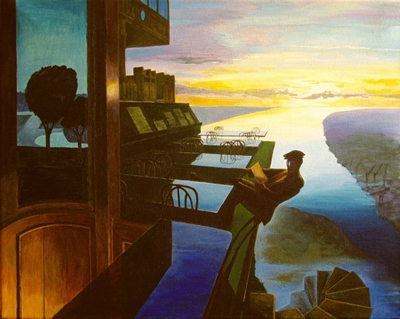 A painting by Frank McNab celebrating the written word

Frank McNab’s wonderful painting celebrates the written word. But how much is the written word, or the arts in general, respected by the state-funded organisation known as Creative Scotland?

Of all the many puerile corporate websites in Scotland, perhaps the most insulting to the intelligence is that of Creative Scotland, the new state-funded organisation which has assumed the enormous patronage of the former Scottish Arts Council and Scottish Screen. Before it came into being, there was scarcely a credible figure in the arts in Scotland who did not view the prospect with a certain alarm. Now that we have the first fruits of Creative Scotland’s vision – its vision of itself – we see all too plainly the source of the preliminary misgivings. This is a horror story.
It is worth remembering, as you sample the prose style of Creative Scotland, that this is an organisation responsible for the promotion of literature:
‘Scotland boasts an incredible range of talent, from award-winning directors and writers to widely recognized actors and internationally renowned architects and digital companies. As a result of the wealth of indigenous talent, Scotland produces a huge volume of home-grown productions and products each year.’
‘We get very excited about new writing, children and youth theatre, innovative and cross-disciplinary work.’
‘We can’t do it all ourselves and we don’t want to. We value our partnerships with grassroots, local, national and international organisations to help us achieve our goals and we’re excited about making new ones.’
‘We like Scotland. So we do all we can to look after it…we will use our resources sensibly and avoid unnecessary waste.’
So, if nothing else, it has an environmental policy. It also has a tendency to get ‘excited’ or ‘very excited’. It throws around meaningless words such as ‘incredible’, ‘innovative’ and ‘cross-disciplinary’. It inhabits a world in which writers are award-winning, actors widely recognised, architects internationally renowned. Volumes must inevitably be ‘huge’. Products are, well, produced. It likes Scotland. But what if it absolutely loathed Scotland? Would it make the slightest difference to its mangling of the English language?
Consider this justification of its wretched logo:
‘By placing the words where we have, a subtle ‘C’ and ‘S’ abbreviation for the organisation is formed. Some people will notice it straight away others may not.’
Where is the comma between the words ‘away’ and ‘others’? There is none. A pedantic point, no doubt, yet if Creative Scotland, with its serious obligations to the written word, is so careless of its own written word, how much is it possible to trust anything else it says or does? No one of any discrimination could look at its website and not be repelled by it.

Many of the greatest artists would have contributed nothing whatever
to the economy.

In its embyronic state, Creative Scotland received consultancy advice estimated to have cost £200,000 from the public purse. It received ‘strategic advice’, advice on ‘financial modelling’, advice on ‘supporting the financial modelling’, advice on ‘organisational structure modelling’, advice on ‘project management’, advice on ‘premises options’. Yes, that’s right. Creative Scotland could not be relied upon to find an office for itself. It needed a consultant even for that.
The work of a valuable community theatre, the Byre in St Andrews, is threatened by the partial withdrawal of funding – one of the last acts of the former Scottish Arts Council under the chairmanship of the retired bishop. Further north, George Gunn is not being replaced as artistic director of the Grey Coast Theatre Company in Caithness. We are entitled to wonder how far £200,000 might have gone to save and protect these worthwhile enterprises had the public money squandered on Creative Scotland’s consultancy binge been re-directed to actual support of the arts.
But it is by no means clear that actual support of the arts, at least in the traditional sense, is really what ‘excites’ Creative Scotland. The language of its public utterances suggests that the arts in Scotland are now to be viewed in a different way; that they are to be regarded as a business (‘a creative industry’, to borrow the horrid official jargon), subject to the laws of the marketplace. If this fairly represents Creative Scotland’s thinking, it marks a profound shift in public policy on the arts. It is disturbing that it is happening first in Scotland.
Creative Scotland’s chairman, Sir Sandy Crombie, and a leading member of the small non-executive board, Peter Cabrelli, are both products (so to speak) of the financial services sector; Cabrelli, indeed, was an influential figure in the merger of Halifax and the Bank of Scotland which created HBOS plc. Crombie refers on Creative Scotland’s website to public ‘investment’ in the arts and claims that the job of the board is ‘to produce a return on that investment for the benefit of our country’ (my italics). This is an appalling statement with an unmistakable message: the arts are to be judged in future by the standards of the bottom line. Ask no more what the arts can do for you; ask instead what the arts can do for your country.
Culture minister Fiona Hyslop goes further. She talks of ‘the potential contribution of the arts to every part of Scotland’s society and economy’. Since when were the arts expected to ‘contribute to the economy’? I suppose the answer to this troubling question is: when the board of Creative Scotland was stuffed with people who believe in the concept of creative industries. It may not be too late – hell, it is too late, but I’ll say it anyway – to offer the Hyslops and Crombies of this world an alternative vision. Public funding of the arts is any government’s conscience money: it is given by governments which are up to all sorts of no good in other ways, including killing people, to allow the most gifted individuals in any society – artists – to be intellectually free. It is given to allow them to think the unthinkable, say the unsayable, oppose the established order, bite the hand that feeds them, shock and dismay Sir Sandy Crombie; most of all to allow them to fail and sometimes fail badly.
Many of the greatest artists would have contributed nothing whatever to the economy and very little to any social structure that Fiona Hyslop would recognise as society. The idea implicit in current official thinking that the arts are somehow about conventional notions of commercial success, in the same dismal catalogue as tourist attractions, ‘world championship golf courses’ and military tattoos, or that it is perfectly all right to describe them as ‘products’ or ‘industries’, is abhorrent. But we had better learn to live with the new philistinism because, suddenly, it’s the only show in town.