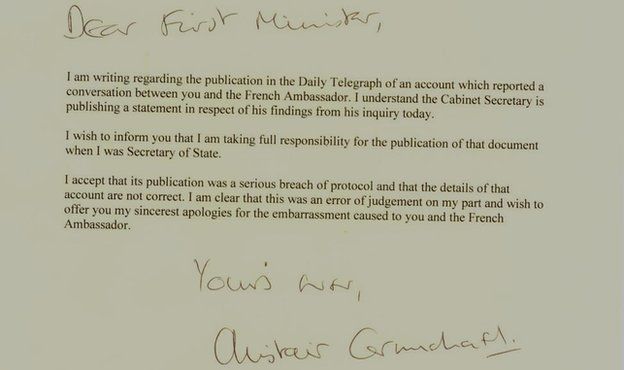 It took long enough, given that all the principals knew the facts and only had to be asked the question, but finally today we have the unedifying truth of Alistair Carmichael’s smear on Nicola Sturgeon.

The man who was supposed to represent Scotland in the Cabinet admitted approving the leak of a damaging report which was itself inaccurate and in so doing exposed himself as unworthy of his office.

Frenchgate was designed to dent the SNP case for holding the balance of power in a Labour-led Commons by suggesting the First Minister had told the Ambassador she preferred a Tory government. The Civil Service report was flawed in that the staffer who spoke to the French consul general who present at the meeting either misunderstood the conversation or deliberately distorted it.

Seeing the potential for damage, the minister’s special adviser Euan Roddin suggested to Carmichael that he leak it to the Unionist Telegraph and, like a slippery schemer, he agreed.

It is interesting to note that at the time Carmichael lied to journalists that he had no prior knowledge of the report of the meeting and the first he knew of it was a call from a journalist. This is flatly contradicted by his letter to Sturgeon in which he admits authorising its leak.

The galling part of course is that he has waited until after the election – surprise – to confess, no doubt under pressure from the Cabinet Secretary to whom the dirty little secret must have been transparent for weeks. Thus, it didn’t feature in his tight re-election campaign where he came home 817 votes ahead of the SNP having, from all accounts lost in Shetland. There will be those who stayed loyal to the Lib Dem in the Northern Isles looking balefully at their treacherous MP today. Carmichael’s claim that, had he still been in office, he would now resign, rings hollow. How very convenient, this retrospective discovery of honour.

Is it a storm in a teacup? Every politician takes what advantage he can, it’s true, but the clever ones cover their tracks and at the very least check the intelligence before approving release. Did Carmichael honestly think Sturgeon would admit to the Ambassador a fancy for more Tory austerity when the contents of their meeting was not confidential? Did he really swallow the line that the SNP preferred Cameron to Labour?

He demeaned the office by playing a dirty game and his flippancy at the time – that it was an election so ‘these things happen’ – was an insult.

Who else was in on the trick? One of the first names to appear in print deriding the First Minister was Willie Rennie, hardly the go-to person for a major controversy. Was he phoned by Carmichael?

This election has confirmed the Lib Dems as treacherous colleagues and unworthy opponents. The man who sought to replace Michael Moore with his ‘more combative’ style is now discredited. It isn’t so long ago the Lib Dems advocated getting rid of the office of Scottish Secretary. Carmichael’s activities in this affair has hastened the day.