The story of the nine-year-old girl in Argyll who takes photographs of her school dinners and posts them on the internet, with notes on the quality of the food, attracted more than 1,400 ‘comments’ on the BBC’s national news website on a single day last week.

National economies teeter, terrible injustices are perpetrated, but the consuming issue of the moment is whether Martha should be allowed to go on taking photographs of her school dinners. It has become an unlikely battleground for freedom of expression, ever since the providers of the dinners (Argyll and Bute Council) decreed that the practice should cease. A bad idea. I could have told them. Yet it is difficult to avoid a certain sympathy for those low-paid workers in Argyll and Bute who put Martha’s dinner on the plate; if I were one of them I would be longing for the summer holidays, if only as a break from the daily scrutiny of my work before an audience of millions.

Martha, meanwhile, has problems of her own – offers of three-book deals and movie rights, the blandishments of ‘celebrity’ chefs, the flattering notice of the world’s press. Her best hope is that this classic silly season story dies with the first whack of a Wimbledon ball. Though I wouldn’t bet on it: she could remain an occasional object of tabloid curiosity for years, poor girl.

I can’t force myself to have a strong opinion on Martha’s school dinners, but there may be a slightly wider point to the story. It was only as I was clearing some books off the shelves at the weekend that the personal significance of her website landed at my feet – literally, as they say. A small, perfectly-bound, very old copy of ‘Treasure Island’ begged to be opened.

Considering that the narrator of the story comes from a catering background, not a lot of eating goes on in ‘Treasure Island’. A lot of strong drink – rum, you will recall – but, for food, they do rather better for themselves in Lochgilphead Primary.

On page 73, we find: ‘The night passed, and the next day, after dinner, Redruth and I were afoot again, and on the road’. A wonderful sentence: consider the exquisite placing of all those commas. But as to the nature of the dinner, and how good it was, the reader is none the wiser. We have to wait a further 85 pages before a second mention of food, and it is only a discussion of eating, not the act of consumption. The doctor reveals that he carries a piece of Parmesan cheese in his snuff box – ‘A cheese made in Italy; very nutritious. Well, that’s for Ben Gunn!’. I like the semi-colon; not so sure about the exclamation mark.

Ben Gunn is perhaps not quite well. He has been three years on a desert island, happily unaware of the international controversy over Martha’s school dinners, and the doctor believes that he cannot be expected to be as sane as the rest of us; Ben Gunn must be given Parmesan cheese at once.

There is more sustenance to be had on page 182 when the narrator makes ‘a hearty meal of biscuit’, supping it in a hollow in the foggy blackness of Treasure Island.

Some went through life guarded and verbally inarticulate, not fully developed, but able to spell and punctuate, add up and subtract. Mostly subtract.

I mention ‘Treasure Island’ not for its gastronomic content – woeful, you would have to agree – but because, when I opened the book, I found a plate at the front announcing that I had been given it in a school prize – ‘2nd for merit, Smith Bequest’ – in the fifth year at primary school. I was nine years old.

Who was Smith? I never knew a benevolent Smith in Bonnybridge. But I would not have been bold enough to ask. All I remember about being nine years old in a primary school in Scotland was my own paralysing lack of confidence and that of nearly everyone around me. Even Jim Lawrence, the brightest boy in the class, who became a surgeon when he grew up, didn’t say much. We answered questions politely when we were asked and otherwise volunteered very little. We wrote a lot, recited a lot, repeated a lot.

There were two exceptions – twin boys. They were the terrors of the village and my closest friends. Only the twins were prepared to buck the system; they taught me a great deal. After prayers they were ritually belted for no good reason; it must have been a sort of non-refundable deposit. Years ago my mother told me that she had met one of them at Falkirk bus station and that they were both now respectable middle-aged men with wives and children and good jobs. This moved me deeply for reasons I can’t quite explain, or perhaps more accurately don’t want to explain.

Why I am telling you all this? It is the recollection of how it was for nine-year-old children in Scottish education long, long ago: a vanished world of deference and respect, of absolute obedience, in which any rebelliousness was brutally crushed. I don’t know when or how we gained the confidence to face the world. Some never did, but went through life guarded and verbally inarticulate, not fully developed, but able to spell and punctuate, add up and subtract. Mostly subtract.

The story of Martha and her school dinners reminds me that the life of a nine-year-old child in a Scottish primary school has been transformed in my lifetime. It takes confidence, real confidence, to start a website about what you eat and what you think of it, and to go on with this website when you know that some people in authority would rather you didn’t. Martha is clearly an exceptional child, but it seems she operates within a culture of education which encourages creativity and personal freedom. It follows logically that we must be producing a new breed of extremely confident children.

Am I right about this? And, if I am, why am I so uneasy about it? 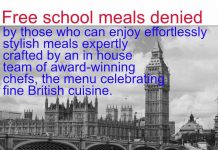 Suffer the little children – in Tory...