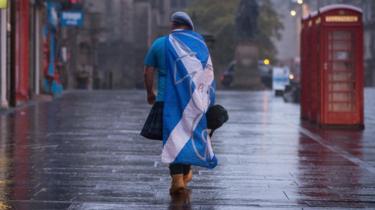 Three years ago tonight, Scotland held its breath after the polls closed on that historical independence referendum. Christopher Silver reflects on what happened that night, and how it has shaped us today.

Clackmannanshire’s No vote at around half one on the morning of 19 September was an abrupt awakening from years of dreaming.

For some such dreaming was an old passion, others were drawn to the new thrill and the possibility it represented. Either way, the prospect of independence intensified in the summer of 2014, in a way that few expected and no one had experienced before.

By the time neighbouring Fife sealed the deal just after six, a change that had been glimpsed had disappeared. Defeat was total. The plucky dissenters in Glasgow and Dundee could not shake off the dead weight of douce auld Scotia: demanding of us all, as officious dominie, that we snap out of the daydream.

Serious, grown up, day to day politics would resume. Someone was even going to set up a commission. The scene shifted to Downing Street where power was retained, in the hands of a Prime Minister who would go on to create the current crisis.

Acknowledging the intensity of 2014 is not to seek to dwell or indulge in it. For many people, this was the truth of the experience: on the walk home that morning we passed an inconsolable woman collapsed on the pavement, asking of her country “what have you done?”

For many of my fellow Scots she’d be the object of hilarity: a freakish wailing creature to be mocked. But politics has the capacity to do that to all of us, whatever side we’re on. It can offer the enormous high of collective vision, realised. It can crush us too.

Three years on, these memories sit there, potent, unresolved.

The facts remain blunt: that morning the core belief that bound together the long and winding project of Scottish independence was shattered. For the first time in their history, the Scottish people were sovereign. They handed that power back. It was not for us.

As a result that ‘us’ that defines all nations has become a far stranger thing to comprehend ever since.

In 1979 the immediate transition from a botched referendum on a Scottish Assembly, to the election of Margaret Thatcher, was also a defeat that was truly existential.

The Herald’s caged lion spoke to a deep sense of national emasculation. Combined with the grubby circumstances that framed the plebiscite itself, misery was the order of the day. Looking back on the depth of this loss Neal Ascherson noted :

“People seemed to shrink and fade. Many turned to alcohol, some to hard drugs. Many more fell back into the old assumption that Scotland was a dead-end (‘there’s nothing for young folk here’), and they left for London, America or continental Europe. The failure of self- government ruined many lives, and they were not the lives of politicians.”

Strangely, unlike in 1979, the loss of 2014 seemed to be immediately offset, as Ascherson himself noted in October of that year , ‘The sense of onrush, of irresistible change, has survived the ‘No’ vote.’

Rather than the end of an auld song, 2014 rapidly morphed into a set of new beginnings. But today, that morning of bleary eyed hugs three years ago seems like a different era.

Taking in the full range of all that has occurred over the past three years, it must be observed that, on balance, moments of triumph have been outweighed by greater defeat.

The SNP’s 2015 “tsunami” has receded and a second referendum has been reset. The Brexit crisis continues to expose the precarious foundations of the British state, but it has yet to significantly alter the shape of opinion in Scotland on independence.

This could change with time. As Scotland’s annual budget is squeezed by £1.7bn – £3.7bn after Brexit, as the absurdity of the project becomes clearer, as the revival of unionist Tory Scotland is exposed as a destructive force, more cracks will appear. But dreams are no longer the order of the day.

The rapid regrouping that began immediately over the course of the days following defeat were welcome, necessary, and probably an inevitable: a high-energy campaign can now gain an afterlife thanks to digital networks.

Robin McAlpine was one of the first out of the stalls, proclaiming, “dry your eyes, on your feet” – let’s keep moving forward.

We have long assumed such speed was healthy: undoubtedly it brought benefits, but it also stopped us pausing to stare defeat in the face.

At this moment, it’s important that we actually take the time to pause and, for the first time in three years, make an effort to properly understand the nature of the defeat in 2014.

After the disaster of 1979, the first steps on the long march back to relevance began with a great shake-up, brought about by the radical socialist and republican 79 Group.

At the time, the group seemed to simply underline the deep crisis in the national movement. Certainly, it failed to make any immediate impact on SNP policy: it was easily discredited and chucked out.

Yet by the end of the eighties a radical recasting of what Scottish nationalism was about had occurred: it discovered a new relevance and momentum in its stubborn opposition to the Poll Tax, a move that won it a broad base of support in urban Scotland.

This would finally evolve into the modern successful SNP, but it also changed the terms of the debate about Scottish politics and independence — shifting a dry debate about the constitution towards a vital agenda to combat the ruining of so many lives.

What new effort will offer the equivalent provocation to reset the trajectory and purpose of the pro-independence movement today?

If a nationalism is, at root, simply an ‘us’ – a consensus that we constitute a group – a national movement must always struggle to reconfigure itself in the face of political events that divide the nation into two opposing camps.

This is why Scottish politics, across the spectrum, has become hobbled by an instinct to swing back, at the slightest test, towards the constitutional comfort zones of Yes/No.

At the same time, as the public realm has receded in the face of market forces, as technology chips away at what’s left of Scotland’s “national” media, the national space itself is in danger of collapsing altogether.

In that event, we really will be left with a collection of tribes north of an arbitrary geographic boundary.

The pro-independence insistence on never ending movement building, when there is no deadline to move towards, is as misguided as the blanket dismissal of anything that can be tagged nationalist.

The most pressing concern must be to work out what will transcend the divide and allow politics in Scotland to break out into a fresh and creative space where innovation is possible.

Since 2014, events like Brexit have cast a long shadow of mounting crisis and division. Politics on these terms has often felt like one half of the population of a country delivering a rude awakening to the other.

Finding that consensus again won’t be easy, but serious political change never is. Rather than continuity, with more troubled times in store for Scotland, the task must be to start again. A new case, perhaps even a new movement, is necessary, in order to grasp the significance of the generational shift towards independence and nurture it.

Scots are inveterate sneerers at each other’s passions and convictions. On the morning of the 19 September 2014, I know that I was far from alone in witnessing the kind of raw emotional loss amongst friends and strangers that I had only ever previously seen in moments of bereavement.

Independence could come next year, or it could take a generation. Like devolution a long 18 year slog towards an inevitable outcome could be on the cards.

In the meantime, let’s heed the cry of those left bereft and those who felt a wave of relief on that autumn morning three years ago.

Let’s move beyond our instinctive constitutional comfort zones and find a provocative spark that will shift the terms of Scottish politics. In doing so we will make independence, like devolution, inevitable.