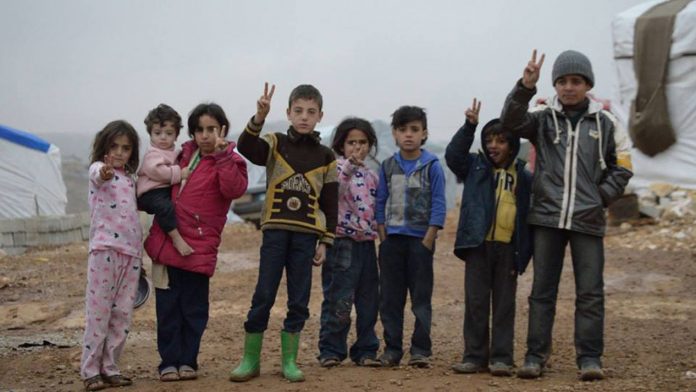 Once Humanity learns to embrace itself there will be No refugees.

On the 29th of April on a sunny Sunday afternoon in the Berwickshire town of Duns, a large number of people attended the Scottish Premiere of the documentary film entitled, Through Our Eyes. Although it is about the refugee situation in Syria and the Lebanon the film begins with the war in Bosnia and was the beginning of a journey for the Bosnian director of the film who is BAFTA award winner Samir Mehanovic. Samir now resides in Edinburgh.

The film features music written and played by refugees. Some of the music was composed by Nigel Osbourne from Cockburnspath. Nigel is also heavily involved in helping in the desperate refugee situation in the Lebanon where one in three of the population is a refugee.

Samir witnessed the war in Bosnia at very close quarters and has used archived clips including footage from a mobile phone and personal observations from that situation to show the violence involved.  He tried to help young people by organising theatrical and dance therapy sessions. This was very successful and the theatrical troupe was invited to present a show at the Edinburgh Festival in 1995. Travelling to Scotland was extremely difficult for them and some actors and dancers arrived in Scotland illegally. The show was a success and Samir stayed on. He worked as a labourer and also in kitchens. After saving up he managed to enrol in a film course. By this time he was recognised officially as a refugee, eventually settling in Edinburgh.

The filming of the theatre group rehearsing is filmed in black and white. It is very atmospheric and it contrasts with the filming of the refugee children in Lebanon camps with their colourful clothes. They are filmed throughout using close up shots. Sometimes they are silent but at times they are keen to talk and express their opinions and hopes.

Most of the adults want to explain their situation and their hopes for the future. Most want to find work or opportunities to study. All want to feel safe. Many would like to return to Syria but some say they have nothing to return to, family gone, homes destroyed. Despite extreme anxiety and exhaustion almost all the faces were beautiful. They were citizens of a sophisticated, cosmopolitan country reduced to ruin. The filming of the long, long line of families walking to find a place of safety is desperately sad.

The camps in Syria are run by the UN but in the Lebanon there is a lack of organisation taking control and the refugees are in a very vulnerable situation. The main idea is to get to Turkey but this is fraught with difficulties. The scenes filmed on board a packed train showing exhausted refugees and the fear expressed by one man about the ‘death boats’ run by the Turkish mafia are very moving.

At the Q & A session after the film with the director and the composer it was quite clear that many countries have meddled in Syria making the situation much worse for everyone. Military intervention makes some people rich but does not help the Syrians hence the opening quote to the article. It is clear talking needs to take place.

The next showing of this important film is on June 19th at the Edinburgh Filmhouse. If you can manage please go to witness and reflect.