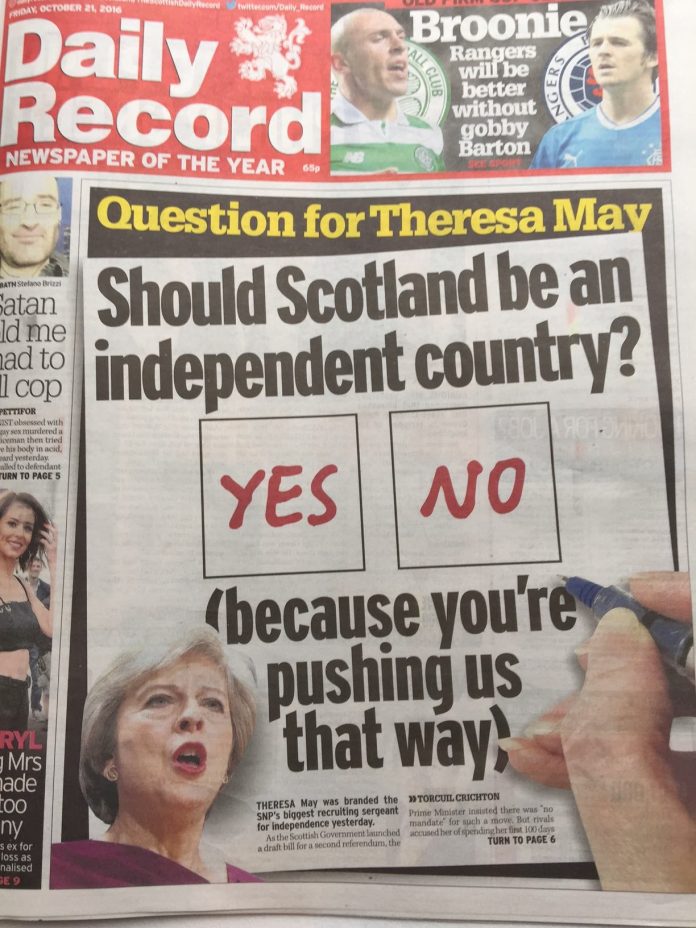 I want to make clear that I am not deviating from any prescribed path towards self-government. On the contrary, even a cursory read of my earlier commentary makes obvious that I’m using this snap election to claim our independence – surely the objective we all share.

I do not advocate UDI. I never have. It only applies in extreme cases where the world community realises all democratic means have been exhausted and there remains no other option. That is far from the case with Scotland. Such is our constitutional position that I believe even a referendum result requires to be endorsed by the current state – the UK – before the world will recognise us. Only then will other nations see the way clear to shake our hand. Rogue actions will not suffice.

Nor am I attempting to subvert some constitutional process by declaring the idea of a referendum null and void. It remains the most likely avenue to guage opinion and secure the mandate. I support SNP moves to achieve one.

However, I am trying to upgrade the political messaging – to Defcon One, if you like. At the moment, by endlessly pleading with a tin ear government in London for the right to consult our own people, we play their game. We make it sound as if our objective is indyref2 itself when it is of course independence.

May and her team have proved themselves impervious to reason and enemies of democracy – using it only as a means of self-advancement even when they legislated to avoid snap elections. She isn’t listening to Sturgeon and won’t until the Brexit process is over and it’s too late.

To her we are bleating about needing her permission to hold a vote. Please, please, Theresa. Be nice and say Yes.

We are currently utilising Defcon Three – Force readiness upgrade above the normal. That means we’re angling for action and getting ready to repel. (Sorry about the warlike tone) It does not mean we’re deadly serious here and you’d better believe it.

Weaponising (here I go again) the general election to say every SNP vote is a demand for independence strengthens the case and drags the referendum issue along in its wake. In other words Defcon One – War is Imminent. (Are you scared yet?)

I see no contradiction in letting the SNP carry on with their politically correct requests for acknowledgment for a popular vote from Her in Downing Street and hundreds of thousands of voters declaring that for us it isn’t about the method of delivery any more. It is the actual hard fact of independence we’re voting for and we consider every single vote an endorsement of that ideal.

If we openly argue for national self-government while others emphasis a referendum, then one supports the other. Voices complaining that this is splitting the campaign miss the point. There is only one objective but there are multiple voices and approaches to achieving it. We don’t all think the same way and it would be spooky if we did.

I’m not disagreeing with anyone who wants a referendum but I am changing my emphasis away from a cri de cour for someone else to deliver my civil rights to a statement that I and others want an SNP or Yes majority to be taken as a mandate – one that no democrat can ignore. How many elections can we win hands down and still be angling for another referendum – like dookin’ for apples? I see the Unionist Press now indicates that the loss of any SNP seats, which seems inevitable to me, will be taken as failure and loss of credibility even if Yes parties win an overwhelming number of seats and 50 per cent of the vote. They, on the other hand, have only to win a seat or two or even hold Edinburgh South to claim a major victory. This is the world of distorted democracy we inhabit. I these circumstances, it seems reasonable to me to step up the game and leave London in no doubt what’s at stake in the June election.

To those potential switchers who need to be wooed carefully towards Yes – Hello, by the way – I simply say that the time to pretend the SNP is soft on independence to sway your vote is over. The stark truth today is that Scotland needs a lifeline to escape this horrendous Brexit debacle, and quickly too. Waiting to see what turns up in Boris Johnson’s briefcase won’t do. Hoping Liam Fox can sell enough electric cattle prods to Asian dictators isn’t the answer. Expecting this regressive Prime Minister, who is currently manipulating the parliamentary process for party gain, to turn into Scotland’s Mother Theresa, is for your dreams.

If you can’t hack independence in these circumstances, you never will. And that’s true for us all. For Scotland. This truly looks like the parting of the ways. Either it’s stepping off dependency into self-sufficiency in Europe or it’s downhill to right-wing hell. You personally might ride the storm but the country you know today won’t. The powers will go back. The privatisers will take over the NHS. Essential immigration will end and the tax take will decline. The demographic will age further. The London elite will organise what they can for themselves – as ever.