Amid all the Brexit inspired talk about identity – British, Scottish, European, regular commentator Bernard Thompson reflects on the Irish experience in Scotland, and urges a reappraisal of the Scottish-Irish relationship in 21st-century politics.

Several years ago, I found myself somewhat flummoxed by the ostensibly-benign popularity of a well-known brand of bottled cider, which drinkers would pour over ice in pint glasses.

While it tasted fine, I couldn’t understand where the sudden fad had originated so I asked a barman for help.

“Well, it’s Irish so I think there’s a bit of bigotry involved,” was his reply.

Now – fair enough – barmen aren’t employed for their nuanced appreciation of cultural or socio-political issues but, nevertheless, his answer revealed a casual dismissal of a fondness for something Irish as being rooted in negative motivations.

People of French, Spanish or Italian ancestry would hardly be subject to pejorative inferences for preferring the food or wines from the land of their ancestors. It is doubtful if German or Japanese drivers would be criticised for showing bias towards the cars of their countries of origin. But the Irish? It never seems to be quite so straightforward.

Over the past week the hashtag #WeAreScotland has quite rightly drawn praise for providing a model of welcome and inclusiveness to people from all nations, living in Scotland. 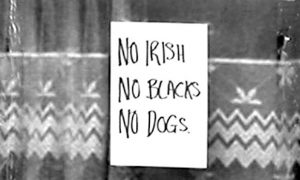 In summary, the general ethos is that, if you live in Scotland and choose to be Scottish, you are as much a Scot as anyone. There are many touching messages from people who have appreciated the gesture.

EU citizens are particularly mentioned, for obvious reasons in the aftermath of a Brexit campaign that has heightened racial hostility and xenophobia to levels that most of us hoped had been left behind in the 1950s, when Johnny Foreigner was seen as inherently strange, demonstrating disordered behaviours based on primitive values.

“No Blacks, no dogs, No Irish” was the infamous slogan attributed to “respectable people” with lodging houses, keen to assure the neighbours that they were discerning as to who they would allow on the premises.

Today’s reported attacks on members of the Polish community in many parts of Britain seem to point to a society that is regressing in terms of its social cohesion and appreciation of diversity and it is to Scotland’s credit that so many people are actively expressing the view that that there is only one class of Scot.

Yet, it was not always this way and some would argue that the welcome extended to the Irish in Scotland, particular those identified as being part of the Irish Catholic community, remains somewhat muted.

There is, of course, an issue of conflation between religion and nationality; Catholicism and Irishness.

Even the normally-insightful Craig Murray, when commenting on the disorder at this year’s Scottish Cup Final (which he attributed in great part to religious schooling) was guilty of a similar error when he said:

“It behoves me as someone whose family is Scots-Italian and Hibs supporting to say that the Catholic Church bears a major share of the blame.”

It is surely unarguable that it is no more incumbent upon people with Italian connections – or who support Hibernian – to accept vicarious blame for the wrongdoings in the name of the Catholic Church than anyone else. Nor are they specially qualified to do so.

But Craig Murray’s linking of Catholicism and Italian heritage (and football) has an even stronger parallel in the case of the Irish (and a West of Scotland club commonly seen as representing a substantial part of that community).

And I believe that this must be properly understood when commenting on the issue. It should be self-evident that to be Irish is not synonymous with being Catholic, but the distinction has not always been clear.

For that, we owe much to the authors of a Church of Scotland document, The Menace of the Irish Race to our Scottish Nationality, prepared for the 1923 General Assembly.

“They cannot be assimilated and absorbed into the Scottish race. They remain a people by themselves, segregated by reason of their race, their customs, their traditions, and, above all, by their loyalty to their Church, and gradually and inevitably dividing Scotland, racially, socially, and ecclesiastically.”

Having previously noted that there should be no objection to the Orange population, the paper goes on:

“The problem, therefore, that has been remitted to the Committee for consideration is almost exclusively an Irish problem; and though recognition should be made of a certain number of Poles in the coal-mining districts, the fact remains that this is a question arising out of the abnormal growth of the Irish race in Scotland.”

While the language used in the document is eye-watering to those of a more liberal hue, the above quotes are offered as a means to better understand the uniquely hostile view that some still harbour towards those considered “Irish Catholic” and the complications brought about by the merging of the distinct entities of religion and nationality.

It should be acknowledged that the Church of Scotland apologised for the document three decades ago and has worked hard to promote more harmonious relations between Scottish communities for a longer time still.

However, an organisation as influential as the Kirk was in the Scotland of the early 20th century shapes values and attitudes that may persist long after they have been repudiated by their erstwhile proponents.

But there is no better time (notably during Police Scotland’s Hate Crime Awareness Week  for Scotland to finally and explicitly throw off those values than now, to the point of being explicit and vocal in the acceptance, welcome and respect extended towards those whose community have arguably contributed more than any other to Scotland’s economy, especially in terms of its labour.

It would also, most notably for those aspiring towards an independent Scotland, be expedient.

While George Galloway was warning of a “historic crossover between Scottish nationalism and anti-Irish-Roman Catholicism” – one that had made many Irish Catholics in Scotland wary of independence – historian Prof Tom Devine was noting that:

“There has been a silent revolution within the Irish Catholic population since the 1970s, the main reasons being the death of structural sectarianism and labour market discrimination. By the 1990s, people from the ­Catholic community had educational parity with other organised religions. That’s vital. They are now much more confident in their Scottish skins.”

With any future – and possibly final – independence referendum, it seems likely that the votes of Scotland’s Irish community will be vital, if a Yes vote is to be achieved. And the best way to ensure that those votes are delivered, and even increased, is to assure the people of the community that a newly independent nation is one that will welcome all its people of diverse origins and cultures without qualification or reservation.

It should also be clear that Ireland is the best and most natural friend and ally that Scotland has today.

In the immediate aftermath of the Brexit vote, Taoiseach Enda Kenny, in consultation with Nicola Sturgeon, took the remarkable step of representing Scotland’s interests at an EU summit. In doing so, Kenny used Ireland’s European Union membership to the advantage of a neighbour, risking tensions in Ireland’s critical relationship with the UK.

“The bonds of kinship and history between our peoples are woven thick, finding expression today in a deep affection and empathy between Irish and Scots wherever our paths cross….

“You might even say that, given our shared and complex history, it has often been difficult to say where ends and where begins, or the other way around. Fundamentally, we are all intermixed migrants, whose shared existence owes more to the transience of our migrations than to the sedentary experience of possessions or property.”

The “intermixing” of Scotland and Ireland’s people predates recorded history but it is worth remembering that the largely Protestant, unionist community in the north of Ireland is largely made up of people proud to be known as “Ulster Scots” with a language of the same name.

Aside from cultural links, the island of Ireland shares many of the most pressing concerns that currently challenge Scotland. Similar in size and population, neither had a majority wishing to see the United Kingdom leave the European Union.

Both an independent Scotland and the Republic of Ireland could face the vexed issue of a potential “hard border” and the disruption to economic activity that such a scenario would bring.

And no other country better understands that desire that so moves so many Scots – to assert its nationhood without the assent of Westminster and the British monarch – than Ireland.

But, while the Republic’s sovereign status offers great potential to assist Scotland, Scotland can also offer much to Ireland, not least in any discussions about the status of the north whose interests have been threatened by the UK’s vote to leave the EU.

In any future negotiations about the possibility of redefining the north’s six counties, a Scottish government neither ideologically wedded to Westminster and unionism, nor affiliated to Catholicism – but from a country where the political, cultural and religious issues are profoundly understood – would have an obvious function as an “honest broker”, given that there are no longer any constitutional certainties in these islands.

President Higgins went on to say:

“The intertwined nature of our shared past has had a reciprocal influence on the destiny and the fabric of each of our countries – perhaps more than we realise. Perhaps, we have both too often been defined, and too often defined ourselves, through the prism of our relationship with our other neighbour, England, to the detriment of a full appreciation of the rich historical links that unite our two lands across the North Channel.”

100 years ago, in Ireland, the Easter Rising – one of the leaders of which was an Irish Scot, James Connolly – precipitated a series of events that would eventually lead to full independence of 26 Irish counties, a process that many see as yet unfinished.

The Rising initially failed and was popularly rejected but a combination of the raised consciousness and discussion of Irish sovereignty, coupled with the ruthless and ill-considered reaction of the British government brought about the circumstances that allowed for Irish independence as we know it today.

The Irish story and the Irish people can provide inspiration for Scots’ aspirations of independence. Not through violence and war but through belief and the courage to find the seeds of ultimate victory from the despair of defeat.

In some parts of Scotland, it is still considered “controversial” to commemorate An Gorta Mor – the Great Hunger that affected the Irish of all faiths and none and led to mass emigration of people just as desperate as any coming from the Middle-East today, who Scots embrace while people in many parts of Europe recoil in fear of their difference, suspicion of their religion or disdain for their poverty.

But, just as any future united Ireland must respect as equals those Ulster Scots who are Protestant and culturally British, the Irish community are part of the fabric of Scotland’s present, vital to its future and worthy of respect without apology or qualification.

Surely, that will never be in question again.