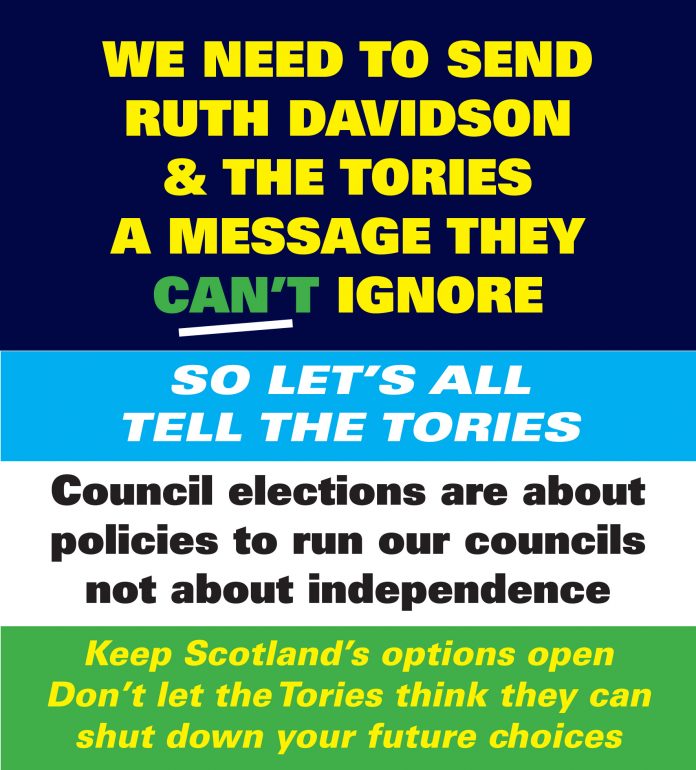 We have council elections next week and the Tories want to make these about saying no to a second referendum.

Sometimes the electorate vote for issues other than the main reason – to some extent that is their prerogative – even when they are unknowingly voting against their own interests, as was the case with the EU referendum in England. Council elections are about who will run our local councils. There is a tradition that politics should have a lower profile in local elections, especially in rural areas.

I don’t believe politics should be kept out of local election campaigns but neither is it right to hijack local elections for an issue that is irrelevant: to how often the bins are emptied; how pothole free the roads are; whether local schools have the resources they need and how careful monitoring of the integration of health and social care is essential to deliver real improvements for those in need of the best care we can provide for them.

If you landed on your backside because you slipped on a pile of dog shit you would want the council to deal with inconsiderate owners. The last thing on your mind, as you feel the bruises swell and contemplate the dry cleaning bill, is to get worked up because there might be another Scottish independence referendum in eighteen months time.

The Tories are dodging local issues and they should be punished for banging on about independence referendums when no referendum is on the immediate horizon.

The local elections will be followed by the hurriedly called Westminster general election. That will be the time for people to consider the future possibility of a second independence referendum and it is in the interests of the people of Scotland to keep an open mind and keep options and future choices for the appropriate time.

Theresa May is making the general election about a hard Brexit. She has shut down all the options that would make future trade easier with the EU after leaving. Coming out of the EU, out of the Single Market and out of the Customs Union means a deal much less favourable than Norway – in the single market, or Turkey – in the customs union.  UK exports will face tariffs all across the EU. Financial services: companies looking for service contracts with EU governments; technical support companies; architects; project managers; legal services and much more will need to relocate, at least part of their operations to an EU country, so that they can do business in the EU after Brexit.

The real impact of what is coming down the line has yet to filter through to the electorate at large, unaware of the significance for employment and loss of HMRC tax revenues. Any distraction from the real issues will do if it helps get the Tories back in Westminster with a thumping majority.

The Tories are accused of buying the 2015 general election in England and they will do so again. Even if they play by the spending rules this time, it will all be about distraction – look we have found a great big pot of gold at the end of the rainbow. Just don’t expect any of this mythical gold to come your way.

There are lots of myths being pedalled by Tories on Brexit. With a big majority the EU will listen to us. Makes no difference to the EU. When you leave, you leave. No increase in the size of May’s majority will carry any weight at the negotiating table. The EU will still be 10 times the size of England. Tory remainers are arguing that with a big Tory majority they will have more influence to soften the outcome. They will not. May will lock them into all the things she wants in the Tory manifesto and they will be bound by that. This will also help with those unelected Lords who are then bound not to oppose the manifesto commitments of an elected government.

Timing is everything and May has played the election card timeously but at the cost of her credibility. When she said there would be no election until 2020, she did not mean what she said. This lady will turn on a worn threepenny bit, silver of course, whenever the card readings tell her the slim majority won by illegal means, now looks unsustainable.

It is also a time when big doses of reality have yet to strike on the negative impacts of Brexit. Banks are moving some part of their operations to EU countries – it has been a steady dribble over months. For the electorate, bankers are not people they would man the barricades for. So why worry? The answer is tax revenues will be lost and lost tax revenues mean less to spend on the NHS and the other things most people do care about. Financial services account for over 7% of UK GDP and are also a major contributor to Scotland’s economy and exports.

Under EU regulations companies bidding for government contracts have to go out to tender. Companies that are Brexit based can forget it. To go for the contract: as architect of a new hospital in Barcelona: or a new railway station for Dusseldorf; or as a contractor to build the project; or a service company to clean the hospital; or run a new train service; or provide legal services under EU law; or a contract to drill for gas off the coast of Malta – then you can only do so from a physical presence in an EU country. The EU negotiators have made this very clear. No amount of surplus Tory MPs at Westminster will change that.

London hosts two EU agencies – the European Medicines Agency and the European Banking Agency. Both agencies are leaving and the EU will make a decision where they will be relocated to in a few weeks time. Dublin, Milan and Barcelona are in the running. Jobs lost in London, why care? Again loss of tax revenues and Scotland’s budget gets another salami cut. The UK will have to contribute towards the cost of relocation. We won the presence of these agencies because we were members of the EU. Why would they stay in the UK when we are heading for the Brexit door?

London is also a major centre for Euro clearing and that has always been an issue for Eurozone members when the UK is not part of the Eurozone. Brexit is delivering another exit and this lucrative trade will go. London is the dominant financial centre for euro-denominated trades. Its derivatives interest rate market turnover accounts for half of such trade – with sterling, the dollar and other currencies making up the other fifty percent.

The shrinking of London as a financial centre will affect everybody across the UK including Scotland with its own long history in financial services and insurance.

Deutsche Bank is considering moving back to Germany, Goldman Sachs, JP Morgan, HSBC et al are all looking to ensure an EU presence with Frankfurt, Paris, Dublin, and Milan all ready to welcome bankers on their expat road trip. The bones of the Brexit carcase are being dissembled as May searches for a long lost past and Boris, of £350 million for the NHS credibility, insists “all will be fine.”

In insurance, Lloyds of London has chosen Frankfurt, and Standard Life, more of an asset management company today – remember them – always threatening to move to London if we voted for independence, they sent a team to Frankfurt days after the EU result last June and are now looking to Dublin for a significant move for their EU business base.

Remember also those four core freedoms of EU membership – People, Capital, Goods and Services. People, and therefore immigration is a sticking point for the electorate in England and the May government in particular. They forgot about capital. Capital can move anywhere anyway and does. That is what capital does. It moves to the markets and the people it seeks to sell to. Freedom of movement is the essential democratic and demographic balance. Scotland should be part of that future, not May’s bleak Brexit.

The Tories have turned their back on Europe and Scotland’s external interests. Davidson’s passion for the Remain campaign died on Unionist dog shit. She has hoovered up unionist support from a feeble Labour party that stood with the Tories in 2014 and from the Lib Dems, castrated for joining a Conservative and Unionist coalition in 2010.

I almost don’t care who you vote for in the local elections – almost. Just vote for parties that have a real manifesto for local services and who don’t distract by shoving irrelevant referendum propaganda down your throat. The electoral system for council elections allows you to order your preferences. Place pro independence parties first, second and however many others you may have on your ballot paper. Then list the others including the minor unionist parties. Place the Tories last, or if that is just too much dog shit to boak on, leave them off. Voting just for the SNP or the Greens is not enough. You will have no influence on the final outcome of the last seat if you do not clearly number your preferences from 1, for the candidate you support most to your 2, 3, 4, and other choices, in declining order.

The coming general election is different. It will be tough for the SNP to replicate their 2015, almost full house. With a rising Tory vote there is only one answer to May and that is to place Scotland’s different international interests with a vote for the SNP. The world is watching and Europe is ready to welcome Scotland. The details will involve much discussion before the people of Scotland make a final decision and that is around18 months away.

Those still not sure about EU membership or independence should still keep all options open. The general election is not a referendum either but a poll to elect MPs to represent us in Westminster. It is for the people of Scotland to decide where their future lies and there is much risk in making a premature decision to opt to stay with the UK.

So let us keep all options open. Choices lie beyond the local elections and a general election timed to avoid the period when the shit really hits the Westminster fan. The Tories were once keen on offering choice. Now just unionist dog shit to keep us under Westminster control.

Promising the past: why Corbyn needs a new policy on Europe