British citizens’ optimism about their job prospects is rated 98th in the world according to new research. The Prosperity Index, an annual survey of 110 countries that looks at wealth and happiness also rates public confidence in Britain’s financial system as 101st internationally.

The crucial finding of the survey, conducted by the Legatum Institute – a Scandanavian think tank, though is in terms of public optimism about expectations of future UK economic performance where Britain is ranked 98th globally. These types of rankings are usually the reserve of third-world nations.

Even more disturbing is that the survey was conducted ahead of the UK coalition governments’ announcement that their austerity plans will entail the cutting of almost 500,000 public sector jobs, £7 Billion in benefits and one-fifth from all public spending budgets.

These austerity cuts will be visited upon Scotland despite the Scottish economy showing a surplus according to GERS (Government Expenditure and Revenues Scotland). Taking economic medicine for an illness Scots don’t have will conjure up memories of the early 90s when Scottish home-owners had to pay mortgage interest rates of 15% to ‘cool’ the overheating economy in the south-east of England.

As austerity bites hard, the Holyrood election campaign on May 6th next year will concentrate on jobs and economic prosperity. With unprecendented levels of gloom in the public outlook, the SNP will argue that if voters want jobs, economic stability and growth through economic independence, they have to vote for them.

Over the weekend, world renouned economist Andrew Hughes Hallett backed the SNP’s case in respect to the benefits of economic independence. Asked whether Scotland would ‘definitely’ be better off, Prof Hallett replied:”You can definitely say that it [Scotland] would be better off in terms of the revenue.”

Overall, the Legatum Institute survey showed the UK in 13th place, twelve places behind Norway who claimed first prize. Controversially, Britain has fallen behind all of what the former Scottish Secretary Jim Murphy called “The Arc of Insolvency” which includes Norway, Ireland and Iceland.

Economic Credibility
Norway’s optimism is largely driven by their North Sea oil fund which invests the nation’s oil revenues for future generations. The fund, valued at £327 Billion and growing at 26% per annum, is administered by Norway’s central bank, Norges Bank. It is the second largest and most respected pension fund of its kind in the world.

Many economists point to Norway, with similar geographical location, natural resources and population, as an economic model for Scotland. The survey will boost former oil economist, Alex Salmond’s case that oil taxation should be devolved and an oil fund established.

With austerity cuts looming, public optimism in the UK economy will continue to plunge.

In the race to enter Bute House, The Labour Party will seek to deflect blame for Britain’s financial crisis by attacking the coalition’s austerity cuts. Their trade-union partners are promising a ‘class-war’ but polls show that the electorate strongly believe Labour is to blame for the crisis.

The SNP will argue, on the other hand, that with the powers of economic independence Scotland could use its surplus to stabilise and grow the Scottish economy, creating jobs and safeguarding public services in the process.

Key to the nationalists closing the gap in the opinion polls with Labour will be to consolidate their message that voters should not trust Labour to fix an economy which they themselves broke. 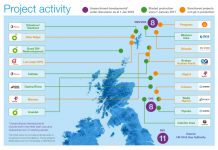 Salmond urges voters – ‘do what is best for Scotland’