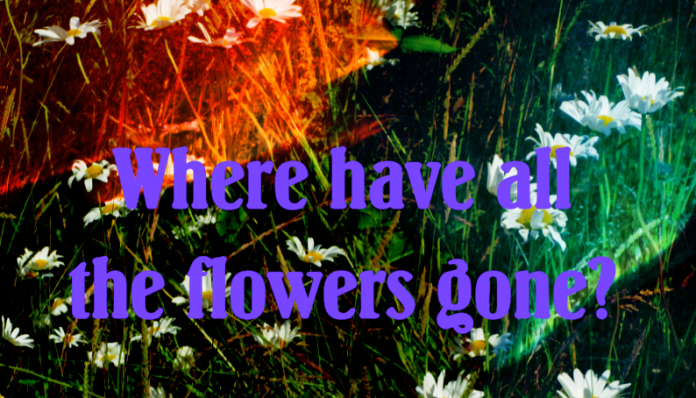 Molly Pollock looks at the traumatic connections between flowers and war, finding a history and connectivity Scotland understands only too well.

Last night on Twitter a few people posted a video clip of people singing Where have all the flowers gone? at Brandenburger Tor in Berlin. A moving moment of solidarity with people in Ukraine suffering the invasion by Russian troops.

The anti Vietnam war song was written by Pete Seger. Some of its most memoral renditions were by Marlene Dietrich who was born it what is now Berlin in 1901.

Dietrich’s film career took her to many countries. She was known to have strong political convictions and she spoke her mind. In her public image she defied sexual norms, known for her androgynous film roles and her bisexuality. Dietrich became an even greater controversial figure when she sided with the Allies against Germany during World War II. But she had a strong social conscience, in the late 1930s, being joint creator of a fund to help Jews and dissidents escape from Germany. In 1939, she became an American citizen and renounced her German citizenship.

In 1947, for her extraordinary record entertaining troops overseas during the war (Dietrich said this was her proudest accomplishment) she received the Presidential Medal of Freedom, an award bestowed by the president of the United States to recognize people who have made “an especially meritorious contribution to the security or national interests of the United States, world peace, cultural or other significant public or private endeavors.” She was also awarded the Légion d’honneur by the French government for her wartime work.

This is one of her performances.

Substituting flowers for young men was not a new concept. Far from it. The flowres of the Forrest predated it by several centuries, though the sentiments behind it are similar – grief at the loss of loved ones.

Flowers of the Forest, or The Fluuers o the Forest is a Scottish folk tune and work of war poetry commemorating the defeat of the Scottish army of James IV at the Battle of Flodden in September 1513, a very significant event in the history of Scotland. Although the original words are unknown, the melody was recorded c. 1615–1625 in the John Skene of Halyards Manuscript as “Flowres of the Forrest”, although it may well have been composed earlier

Mentioned in The Scots Musical Museum as The flowres of the Forrest, and the air (or tune) apparently survived, but several versions of the words were written down later, the most usual being by Jean Elliot published about 1755.

The Forest was a district and Royal forest comprising Selkirkshire (or Ettrick Forest or the Shire of the Forest), large parts of Peeblesshire and parts of Clydesdale. The Forest was renowned for its archers with them earning the epithet “Flowers of the Forest” at the Battle of Falkirk in 1298. They formed the bodyguard of King James IV at Flodden, where their corpses were found surrounding their dead monarch.

The song, written in Scots, describes the grief of women and children at the loss of their young men in war.

This haunting version of the lament is sung by Isla St Clair.

Concerns over the BBC in both Wales and Scotland