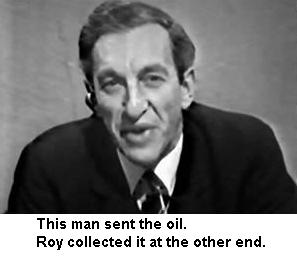 At the beginning of the week, a strange question on the telephone from the distinguished historian and member of the Scottish Parliament, Chris Harvie:
‘What were you doing on the 2nd of November 35 years ago?’ he began.

At the beginning of the week, a strange question on the telephone from the distinguished historian and member of the Scottish Parliament, Chris Harvie:
‘What were you doing on the 2nd of November 35 years ago?’ he began.
‘Good heavens, I haven’t the faintest idea what I was doing on the 2nd of November 1975,’ I replied, reasonably enough. ‘Why?’
‘Because I know what you were doing.’
My heart missed a beat.
‘Really? Do tell.’
‘You and Raymond Baxter were co-presenting a TV outside broadcast. He in Aberdeen, you in Grangemouth. It was the first day of North Sea oil.’
I must take Chris Harvie’s word for this. But, if I no longer remember the date, I have quite a vivid memory of the occasion. For an hour or more, I stood there like an idiot at the BP refinery awaiting the arrival of the wealth-generating liquid down some pipeline from Raymond Baxter’s nerve-centre. I could arouse little interest in the natives, who listened unimpressed to my assurances that this was a historic day in the history of Scotland, if not of Grangemouth itself. When the oil did finally arrive, it came not in a show-stopping gush but a damp squib of a trickle. But I made the best of it: at least I could claim to camera that I was the first person to receive into his hands, suitably bottled, the British economic miracle.
After the broadcast, the management at Grangemouth gave me a commemorative phial of the stuff. It has been transferred from house to house as reverently as any family heirloom. I had a look at it last night. Thirty-five years on, it has evaporated. Not a drop remains.
What should I do? Donate the empty bottle to the National Museum of Antiquities?

As I consider the symbolism of the empty bottle, the question in my mind is whether much has changed or whether we might even be worse off.

With the benefit of the haunting hindsight for which Chris Harvie is to blame, I see two possible symbols in the recollection of that distant event.
The first is that BBC Scotland could not be trusted to handle the British economic miracle on its own. The occasion was considered too important for Queen Margaret Drive, as it was known then; London insisted on being in total control of the broadcast. As the only Scot involved, I was summoned to a ‘planning conference’ at White City chaired by a producer from the OB department whose devotion to every detail of the day was chillingly reminiscent of arrangements for a military assault or, perhaps, a state funeral.
The languid Baxter, who would have been perfectly cast as a tweed-suited gent in a racing car, showed scant interest in the visiting provincial. Over lunch he addressed me grandly as ‘dear boy’. As Baxters go, I might have preferred Stanley.
I thought nothing of this at the time: nothing of the fact that my own immediate employers had been bypassed, nothing of the insult implicit in this policy decision. Alastair Hetherington had recently been appointed controller of BBC Scotland and was already engaged in his battle with our London masters for more Scottish autonomy, a battle that would lead to his dismissal soon enough. London called the shots, and as a young reporter I accepted this unquestioningly.
But, as I contemplate the symbolism of the empty bottle, the question in my mind is whether much has changed or whether we might even be worse off. At least in 1975, current affairs producers of the quality of David Martin, Matthew Spicer and Kenneth Cargill were given weekly prime-time slots for their talents. Consider the situation facing their successors. There are good people behind the ‘Newsnight’ opt-outs from Glasgow, but that is still essentially what they are: opt-outs. Recently, when I took part in the programme from the studio at Pacific Quay, the Scottish component did not begin on schedule but was delayed by three minutes by an over-running interview in London HQ. The three minutes were not made up at the other end; the programme was simply cut by that length. And yet this is our only significant weekly current affairs slot.

Like most Scots in 1975, I did fondly imagine that some of the colossal profit would be re-directed back into Scotland to regenerate our fragile economy and rejuvenate our crumbling infrastructure.

Then there is the oil itself: spent from my little bottle; gone. This is the second symbol.
Chris Harvie the historian, to say nothing of Chris Harvie the nationalist politician, would be entitled to see the southern control over the broadcast as a neat metaphor for the southerly direction of the oil revenues themselves.
Like most Scots in 1975, I did fondly imagine that some of the colossal profit would be re-directed back into Scotland to regenerate our fragile economy and rejuvenate our crumbling infrastructure. Only a few deluded themselves that we had any proprietorial rights – the SNP’s potent slogan, ‘It’s Scotland’s Oil’, was political and moral rather than legal and practical. But there was a general expectation on 2 November 1975 that a general good would accrue from the oil revenues – particularly as Scotland would have to suffer the human and environmental consequences of the boom.
Shetland did rather well out of it, thanks to a far-sighted local authority CEO; the north-east wasn’t exactly complaining. But the opportunity to make a transforming gesture on behalf of the Scottish people as a whole was not grasped. Much of the central belt remained sunk in apathy and degrees of poverty, material and otherwise.
Where did all the money go? Did anyone at the Treasury, respectful of the unexpected windfall, open a book called ‘oil’ and enter methodically the many good deeds it made possible? Or did the black, black oil I held in my hand that day at Grangemouth slip out of it just as easily, turning into a national fool’s gold? It seems we are bust anyway.