SPEAKERS CORNER…
Now across Europe the great blame game will rumble back into play.  Our banks, your banks, their banks, or is it your feckless householders or ours, certainly can’t be theirs, they’re still doing well in Germany.  Expect lots more national stereotypes to be wheeled out for ritual defamation.

So let’s ask who it was took a dump in Ireland?

Ireland also has a large number of subsidiaries of European, British and American Banks.These subsidiaries are often registered as Irish and therefore on Ireland’s tab not the nation of the parent bank.  This often gets forgotten in the excitement. But it is KEY.

Ireland also houses a very large chunk of the world’s Special Investment Vehicles (SIV’s) which are the shell companies which house trillions and trillions of dollars and Euros and pounds worth of Collateralized Debt Obligations (CDOs). These are what Warren Buffett described as “weapons of financial mass destruction'” And they are in their own way as hard to find and disarm as the ones we had a fraudulent war over. Anyway I digress.

These CDOs, in turn, house an equal or greater nominal value of Credit Default Swaps (CDS) written upon the CDOs.  I can’t tell you the figures because only the Irish Stock exchange has the otherwise completely confidential paper work and I have serious doubts (from what I have been told in the last week by an insider with first hand knowledge) that the Irish regulator and stock exchange have much of a clue themselves.

So, to the crime.

Some of this will, for legal reasons have to be done in generalized terms with names left out to protect the Innocent – me. But to start with let’s be reasonably specific. Germany was and is very very angry with Ireland for ruining its banks.  That is what a German banker told me this week. She spoke on the guarantee of anonymity as she would suffer all sorts of legal problems if she was identified.  I am sorry that this leaves you just having to trust that I’m not just making this up, but I hope many of you know me well enough to go with it.

In fact it was rumoured in German banks that at the time of the  collapse of Hypo Real Estate, an angry  call was made from the German Premier to the Irish, to complain, to which the answer was … well it was short.  Now this is nothing but a rumour. But it was a rumour in Germany which indicates that some in Germany were and perhaps still are very angry and blame Ireland.

So are they right in their blame?

The same banker told me this. She was aware of instances, and so was everyone else, of banks, German banks, who used to fly their people from Germany to Ireland in order to do deals that were not allowed in Germany.

German banks set up subsidiaries in Ireland.  These subsidiaries were often registered as completely Irish companies.  Back in Germany the German regulator (BaFin) had strict and enforced rules.  Very good rules for the most part. Far, far better than Britain or Ireland.  But these good rules, properly enforced meant German banks could not do many of the most lucrative and in hind sight reckless kinds of deals.

So the German banks would do the figures and work it all out in Frankfurt, then send a banker over to Ireland, get them to sit at ‘their’ desk in Ireland, in the Irish bank, and do the deal there. The legal registration of the deal and the ‘oversight’ were all Irish.  This is known in the financial world as jurisdictional arbitrage.  You and I would call it cheating if we were feeling charitable and lying if we weren’t.

The Banker flies back to Germany, where the German bank hasn’t  done any deal, and therefore has done nothing wrong. The deal was properly overseen and approved by the appropriate Irish financial authorities and the profits would be banked at a very happy Irish bank.  If any management of the ‘deal’ was required an Irish company would be hired, there are many, and an Irish manager often living not far from Cork, would ‘manage’ the money in and out.  I have spoken to such people. Usually I can hear the sweat coming off them as they ask how I got their number and where did I get my information.  To which I would reply that the Internet is a very large place and never, never forgets.

Should Germany, have pulled the plug on this racket?  Should Ireland?  Whose losses when they finally came, are they?

If the bank is registered in Ireland as an Irish bank/business, then the loss is on Ireland’s tab.  Depfa was an Irish bank. Just months before its collapse in 2007 it was bought by Hypo, a German bank.  Had that not happened the €180 billion euro loss at Hypo Real Estate would have been Ireland’s loss, dwarfing all other losses. Why was Hypo Real Estate bought by Germany at that moment?

I can’t say for sure. But think about this.  Sachsen Landesbank collapsed due to around $30-40 billion in bad sub prime loans its Irish subsidiary called Ormond Quay had made in the U.S. OrmondOrmond’s collapse caused the immediate collapse of one of Germany’s Landesbanks. Which suddenly sent ripples of fear through all the other Landesbanks as the world woke up to the rampant idiocy that the Landesbanks had been getting up to …in Ireland.

Germany had to step in and bail Sachsen out.  Now lets think about Depfa.  Depfa started life as a German bank. It became listed in London and then in 2002 moved to and registered itself in Ireland in the newly set up  IFSC (Irish Financial Services Centre)  This was like a legal gated community or financial maquiladora. The IFSC was in many ways supposed to be the regulator of what went on in its grounds.  I leave you to decide how well it must have done.

By the way the IFSC was created by Dermot Desmond with the help of Charles Haughey.

So when in 2007 Depfa was suddenly bought by Hypo Real Estate was it because news of financial problems hadn’t reached Germany and they bought it because they thought it was a great deal and were cheated by those crafty Irish?  OR might Germany have known that a massive crisis was ticking away in Depfa and could see the clock was running down close to zero hour, and realized that if left in Ireland it would not, could not be rescued by Ireland and so would be left to start a chain reaction that would move straight to Germany?  If they thought the latter, do you think it likely that Germany would have just said “Oh Scheisse” and sat waiting for Armageddon, or do you think they would have taken emergency action to bring Depfa under German ownership and jurisdiction where German pockets were deep enough to bail it out and thereby save the rest of Germany’s banking system?

So let’s return to our question? Whose fault?  Would Germany be right to be bitter about Depfa/Hypo and others? Or does the blame lie with the Germany banks and Bankers who flew to Ireland to do their mess?  Is it Ireland’s banks mess or Germany’s?  I don’t think we can disentangle the blame.. maybe when the Irish Banks’ books are finally opened we could. But I bet you no one outside the top bankers and politicians, the people who oversaw the creation of the bomb in  the first place, will ever be told what’s really in there.

I can’t say and neither can you,  if the losses are Irish or German. But we can say, the losses never were, and should not ever be,  yours and mine. We, the people, who were told nothing, were not asked nor consulted, whose laws were either ignored, set aside or re-written, we should not be expected to pay for those losses now.

They are bankers losses.  It is NOT a question of Irish or German. It is question of wealthy bankers from all countries not just Germany (almost every nation, Germany, America, Russia, France Britain, we did dirty work in Ireland) and their corrupt Irish helpers versus the people. It is not a question of should the Irish people or the German people pay. Neither people should. It should be the bankers who made the losses who should take them.

DO NOT allow the bankers to set us against each other as a cover for their crime and guilt.

Thanks to GOLEM XIV for allowing Newsnet Scotland to reproduce this piece. 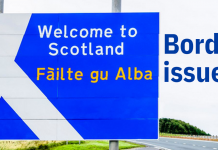 Labour urge US Senators to “join with us” as both question...